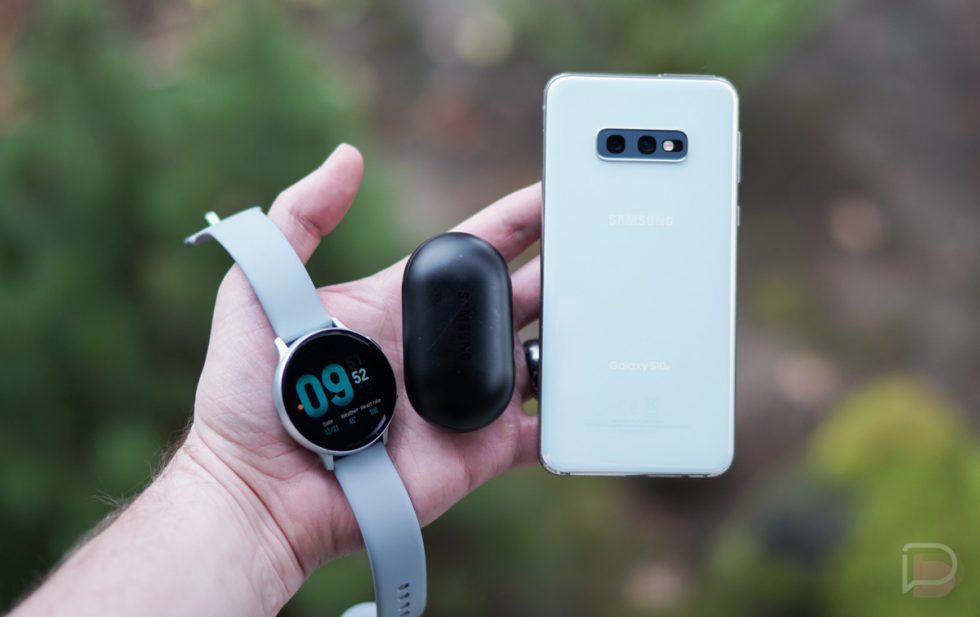 Let’s see: Samsung watch on my wrist, buds in my ears, and phone within reach of not just me, but my wife too. What is happening to the world? Jesus. Someone save your boy.

After years of being the ultimate hater of Samsung, at least according to all of the we-only-take-criticism-of-Samsung-products-to-mean-you-are-biased guys around here, my life is filled with a lot of Samsung. Not that the suggestion about us (me, specifically) being impartial to Samsung was ever based in reality, this is still a moment I feel the need to address.

2019 will probably be marked as the year I welcomed more Samsung into my life than any other.

I fell in love with the Galaxy Watch Active 2, and will probably recommend it as the only smartwatch for Android users until Qualcomm starts caring. It’s so, so good on so many levels (display, battery life, performance, and daily fitness tracking), which is not something you can say about many smartwatches outside of the newest Apple Watch.

The Galaxy Buds, I own two pairs of them. They are the only true wireless buds I use when I’m not reviewing someone else’s. They look minimal enough in ear, sound surprisingly amazing, and continue to improve through meaningful updates. They’re also quite reasonably priced for being this good.

For phones, yeah, that’s a longer more complicated conversation, but the past 12 months featured more than one Samsung handset I sure liked a lot.

Samsung won me over initially with the Galaxy S10e, thanks to its flat display (OK, and camera and software and performance and design). The smallness of it was an added bonus, but I really dislike curved displays and their lack of any legitimate reasoning for existence outside of looking pretty. The S10e was a welcomed change-up or curveball or other-baseball-analogy-thing to their year-after-year curve-and-grow-all-the-things mindset.

Of course, the Galaxy Fold also dominated a small portion of my life that I can’t seem to forget or move on from. If there’s one device in 2020 I can’t wait to see a follow-up of, it’s the Galaxy Fold.

There was a Galaxy Note 10 moment too, which my wife took on after I was done with testing and the Pixel 4 flopped. I’m secretly jealous of her phone, even as I have access to every single phone on the planet in a drawer to my left. She has a Note 10 (the smaller one) and I don’t. Everyone she works with keeps telling her how awesome her videos are because they can do that cool bokeh thing. I want bokeh video.

Outside of the device side of Samsung, I’m more than impressed with their quickness of Android 10 updates for Galaxy S10 and Note 10 models. I’m not sure Samsung has ever delivered a big Android version update with this speed and to this many phones. No, they still haven’t last year’s S9 or Note 9, but come on, it’s OK to give them props.

Am I really a Samsung fanboy, though? Umm, no. Being a fanatic of a tech company I cover probably shouldn’t be a part of my job or something I should let happen, but I sure do appreciate the products Samsung is making right now. For the first time in a while, Samsung is the company heading into a new year I can’t wait to see more from.