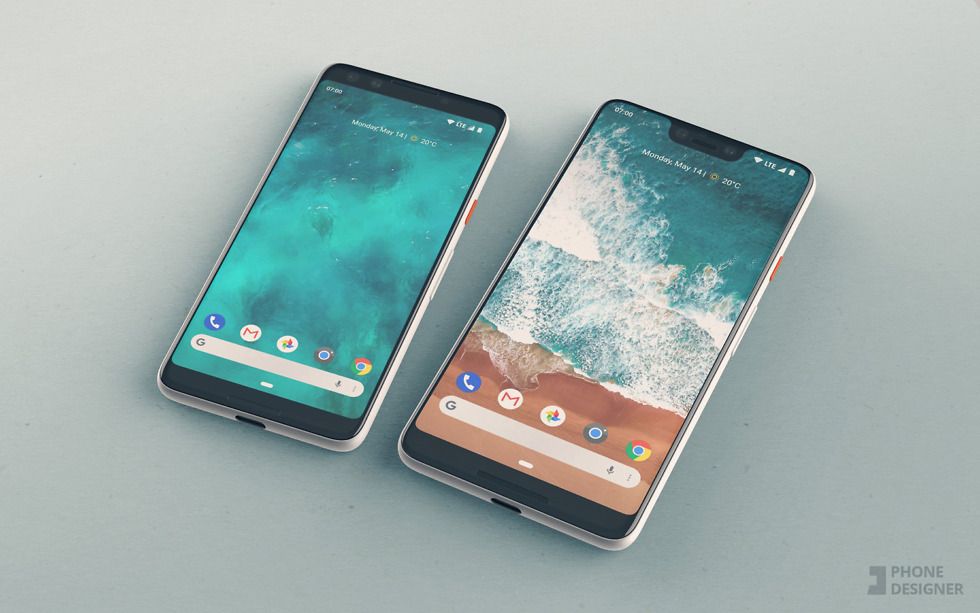 Yesterday, we posted up some well-made render concepts of Google’s upcoming Pixel 3 and Pixel 3 XL that were based on a supposed screen protector leak for each phone. I made it pretty clear that I thought the renders presented two very Google-esque phones that meet current smartphone trends and look, well, hot as hell. But after seeing the reaction on Twitter and by some in the comments, it’s clear that a number of you do not agree.

Now I’m curious – what do you want the Pixel 3 and Pixel 3 XL to look like? If not similar to the image at the top of this post, then what?

Taking that a step further, are you guys crazy? In the image above, you have a smaller Pixel 3 that is a mirror image of last year’s Pixel 2 XL. It has slimmer bezels than the Pixel 2, but overall, keeps the design language from last year in a body that the original Pixel 2 should have had. There’s no notch either! It’s a full-screen device with stereo speakers. If you liked the Pixel 2 XL, what don’t you like about this Pixel 3 render?

I know the answer. It’s not that you don’t like the Pixel 3, it’s that you just don’t like the Pixel 3 XL render. And I’m guessing that’s because of the notch and chin setup, right? Here’s the thing – deal with it. Now, before you freakout at me, remember, you are talking to the guy who freaked out for two weeks straight about notches. I wrote too many pieces about how stupid this notch trend was because it looked as if Android manufacturers had given up and were back to copying Apple and that Apple had won. I dislike the notch trend as much as anyone.

But the reality here is that this is what 2018 is. 2018 is the year of the notch. Display makers are making notched displays and manufacturers are happily putting them in phones. They are telling us that this is the next step to a future that includes a true all-display phone. Some are suggesting that this is what consumers want, but really, it’s just what the industry as a whole is doing.

Sure, they look a bit awkward. Are they the worst thing to ever happen in phone design? No. Let’s not forget about ticker and secondary displays, Samsung’s fingerprint reader locations in 2017 phones, or volume buttons on the back of phones.

I just reviewed the OnePlus 6 and Tim just wrapped up with the LG G7 ThinQ. Both have notches. Neither of us, after spending weeks with each phone, came away annoyed by either notch. Neither of us implemented each phone’s software tweak that attempted to hide the notch. We used them, got used to them, and that was that. My guess is that the Pixel 3 XL, if it does have a notch, will be a bit awkward for a day and then you’ll all get over it. Why? Because it’ll probably be the best smartphone you can buy, just like the Pixel 2 XL was with its supposed bad display and big bezels.