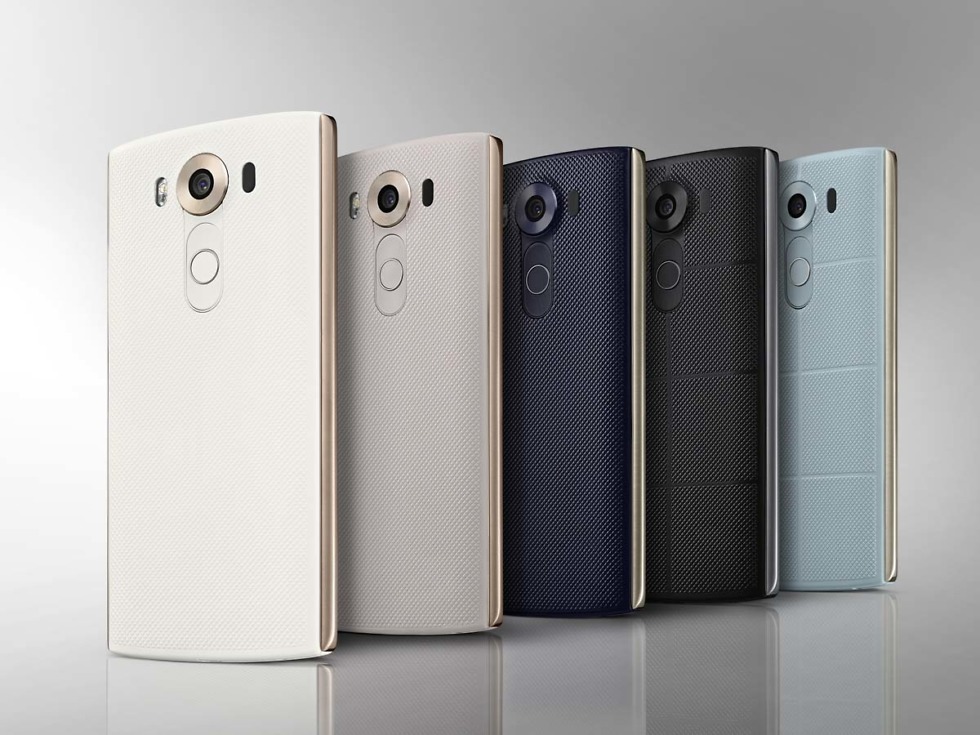 This evening, LG announced a brand new flagship called the V10. As you know from the couple of leaks we have seen of the device, this phone sports a secondary display, dual front camera setup, and an interesting textured backside. That’s not all, though. LG worked in all sorts of random things – seriously, this phone is full of stuff upon stuff upon stuff – to help try and differentiate this phone from the pack. Because this phone comes off on paper much like a G4, it needed all of these new things and stuff to do that.

As for the things I mentioned, this is what I’m talking about. It has that secondary display for showing notifications, weather, battery status, etc. when the phone’s screen is off. But once you turn the phone on, it turns into an app shortcut area or a place for notifications when you are in an app and don’t want to be bothered. We have seen others attempt this concept before and it didn’t go well. Think Samsung Continuum and Note Edge. 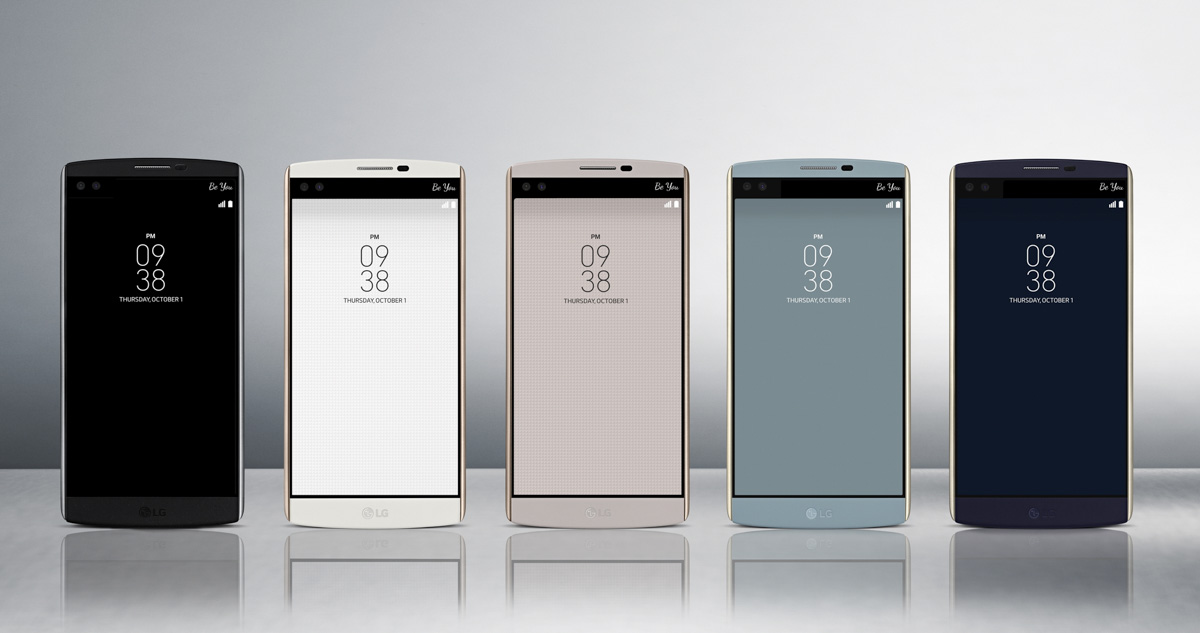 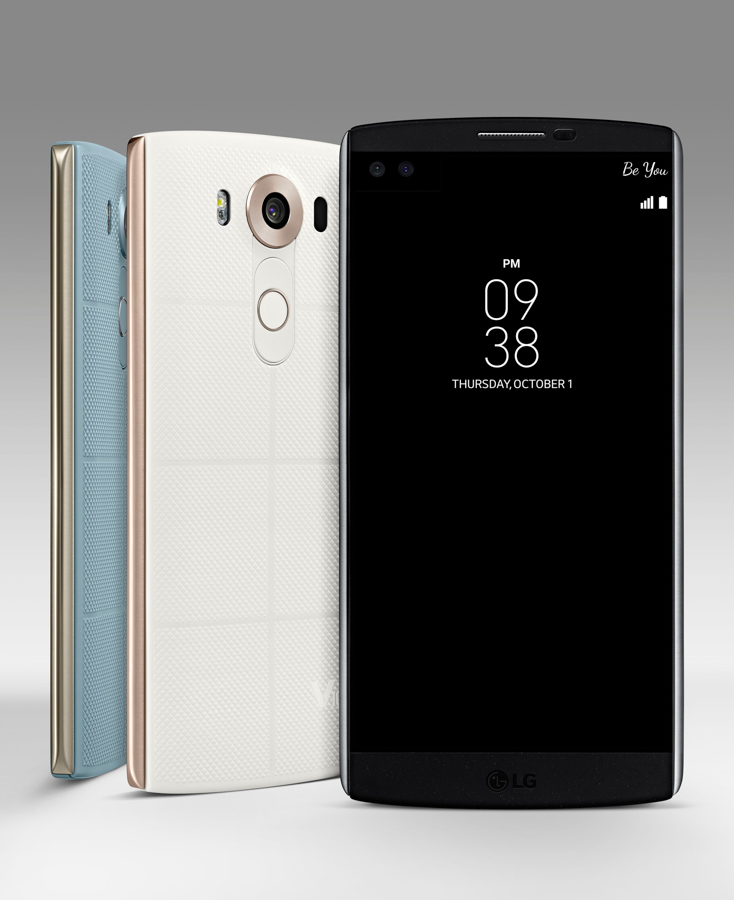 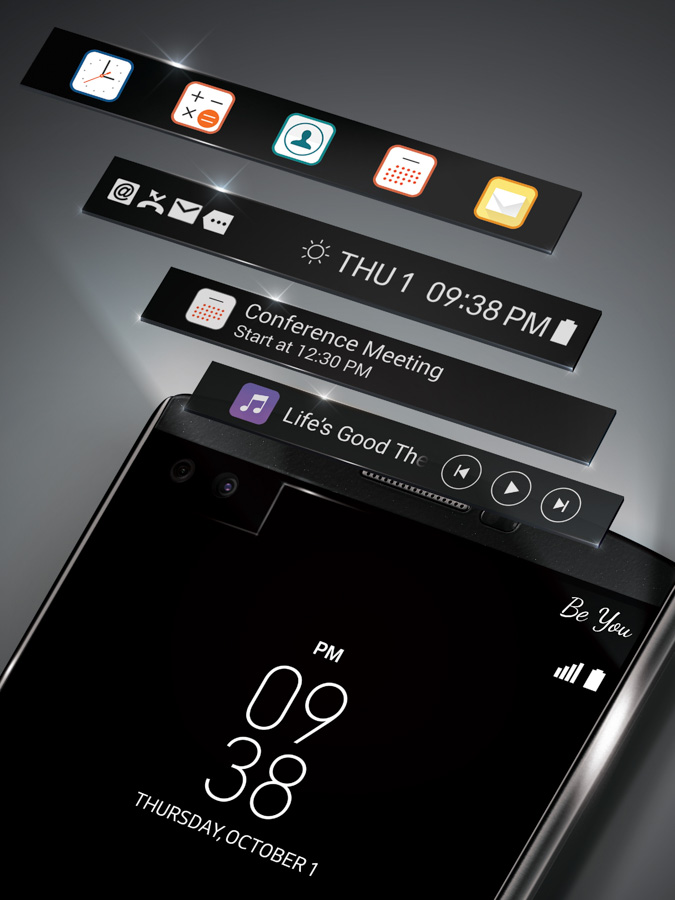 The V10 has dual front cameras for this world’s ridiculous selfie addiction. With the two, you can either take normal 5MP shots or wide-angle photos. With the rear camera, LG is introducing a manual video mode for the first time in a smartphone, with settings for shutter speed, frame rate, ISO, white balance, and focus. Within that new video mode, there are all sorts of steady/quick/share/etc. options.

The phone has a fingerprint sensor as well, along with 32 bit Hi-Fi audio, a Dura Guard steel frame, and Dura Skin on its back. LG says that they did a bunch of 3rd party drop tests with the phone and it performed quite well. Yay for drop tests.

The LG V10 launches in Korea this month and will then reach the US, China, and other key countries later on down the road.

EDIT: Hey, good morning! I see my late night V10 announcement post came off a little…too snarky for some. That was partially on purpose, because “Dual selfie cameras! Dual screens! And drop tests! And Dura stuff! High-end audio for 1% of people who care! And…our worst skin in the business powered on a QHD display with a Snapdragon 808.”

LG is doing some good things here, but it’s still kind of the same old LG story. The problem with LG is their skin, pretty poor performing phones, cheap exteriors, and terrible update patterns. The cheap exterior may be gone here, thanks to the steel frame, but I just don’t have any sort of high hopes for this phone in the performance, update, and software experience departments. While they added in a bunch of new headline grabbing dual this and that, it’s all just masking the LG problem that has been there for years. None of us were asking LG to try and innovate by adding a second screen to a phone or to add in the highest end DAC they could or a second selfie camera or manual video controls. We just want them, sort of like Samsung did, to go back to the drawing board with their software approach and overall design. This just all feels like they needed another phone for 2015 because the G4 flopped so hard that they just tossed on a bunch of duct tape to leftover G4s and dual’d it up.

That’s not a me hating LG thing, that’s a me expecting LG to do better thing.

LG UNVEILS V10, A SMARTPHONE DESIGNED WITH CREATIVITY IN MIND

SEOUL, Oct. 1, 2015 ― LG Electronics (LG) today took the wraps off its newest smartphone featuring multimedia capabilities never before seen in a mobile device. The first of its V Series phones, the LG V10 was designed to provide a rich multimedia experience ― both consumption and creation ― for today’s social network savvy consumers. Distinctive new features such as a Second Screen, Dual Front Cameras and Manual Video Mode differentiate the LG V10 from the competition. All this comes wrapped in a design that utilizes high-grade stainless steel and a durable silicone skin to make the V10 one of the rare smartphones to pass drop tests for shock conducted by an independent third party.

Dual Front Cameras and Multi-view Recording
Wide angle images usually require a large, heavy lens which can distort the corners of photographs. The LG V10 features 5MP Dual Front Cameras with two separate lenses to capture standard 80 degree selfies or perfect wide angle selfies of 120 degrees, without the need to pan the smartphone which increases the likelihood of camera shake. For the wide angle shot, the V10 employs a sophisticated software algorithm to combine images from the two separate lenses which are just far enough apart to provide two different points of view. The ability to take group selfies without a selfie-stick has never been easier. Multi-view Recording can capture different angles utilizing all three cameras on the V10. Select and insert the version that looks best in your masterpiece.

Video and Audio Capture Capabilities
As the LG G4 did with photography, the LG V10 offers users the ultimate in video capturing, editing and sharing. The V10 is the first smartphone to offer manual mode for video. First introduced for still photographs on the G4, the technology has been enhanced to handle video recordings as well. With Manual Video Mode, budding directors can easily create professional-quality videos by adjusting options such as shutter speed, frame rate, ISO, white balance and focus while recording. Videos can be recorded in three resolutions ― HD, FHD or UHD ― and two aspect ratios ― 16:9 standard or 21:9 cinematic.

In addition to its impressive professional-level video and audio capabilities, the LG V10 offers these additional features that video content look and sound their best:

The V10 carries on LG’s tradition of providing alternative storage options with a microSD card slot. Compatible with cards of up to 2TB, V10 owners can shoot as much 4K video as they want. And with the 3,000mAh removable battery, you can always be ready with a second or third replacement battery to pop in if you ever run low on power while shooting. And with Qualcomm Quick Charge™ 2.0 technology built-in, it only takes 40 minutes to get a 50 percent charge.

Durability and Design
The LG V10 was designed to be taken places other phones normally wouldn’t feel at home. The resilient Dura Guard frame firmly secures the display to protect the phone from hard bumps and tumbles. The V10’s frame is composed of SAE grade 316L stainless steel, the same tough, hypoallergenic material used to make surgical tools and high-end watches. Because the edges and corners are the most vulnerable areas of a phone, the extra protection provided by the Dura Guard frame ensures maximum durability.

On the back and bottom of the display, resilient but soft Dura Skin offers added protection from direct impacts to the device. Dura Skin is soft to the touch but also is highly resistant to nicks and scratches. What’s more, the back grid pattern was designed specifically to offer a more secure grip, even when you’re on the go. Independent testing and certification firm MET Laboratories tested the LG V10 by dropping it from height of 48 inches repeatedly at different angles and found it to be “MIL-STD-810G Transit Drop Compliant” for shock.

Great Sounding Music and Voice
As an advanced multimedia smartphone, the sound in the V10 has been designed to be best-in-class. The V10 features 32 bit Hi-Fi DAC by ESS Technology, designers of high-performance audio products for professionals. The LG V10 automatically detects connected devices and provides sound control options which can be customized. And the LG V10 is the first commercial device to utilize Qualcomm Technologies TruSignal™ antenna boost technology designed to intelligently optimize signal strength at all times for fewer dropped calls, faster data and better call coverage, no matter how the phone is held.

Access and Security
Along with the popular Knock Code, the LG V10 features a new fingerprint sensor to unlock the smartphone and turn on the display simultaneously. The sensor also works with Android Pay in the United States to make purchases as quick and easy as possible.

“The LG V10 was designed from the ground up primarily as a multimedia smartphone for the sharing ecosystem,” said Juno Cho, president and CEO of the LG Electronics Mobile Communications Company. “We heard from many customers that until the G4, they weren’t comfortable going on vacation or outings without a separate camera. With the V10, we hope to do for video what the G4 did for photographs.”

The LG V10 will be available in Korea starting this month followed by markets such as the United States, China and key countries in Asia, Latin America and the Middle East. Information regarding additional markets and launch dates will be announced locally in the weeks to come. 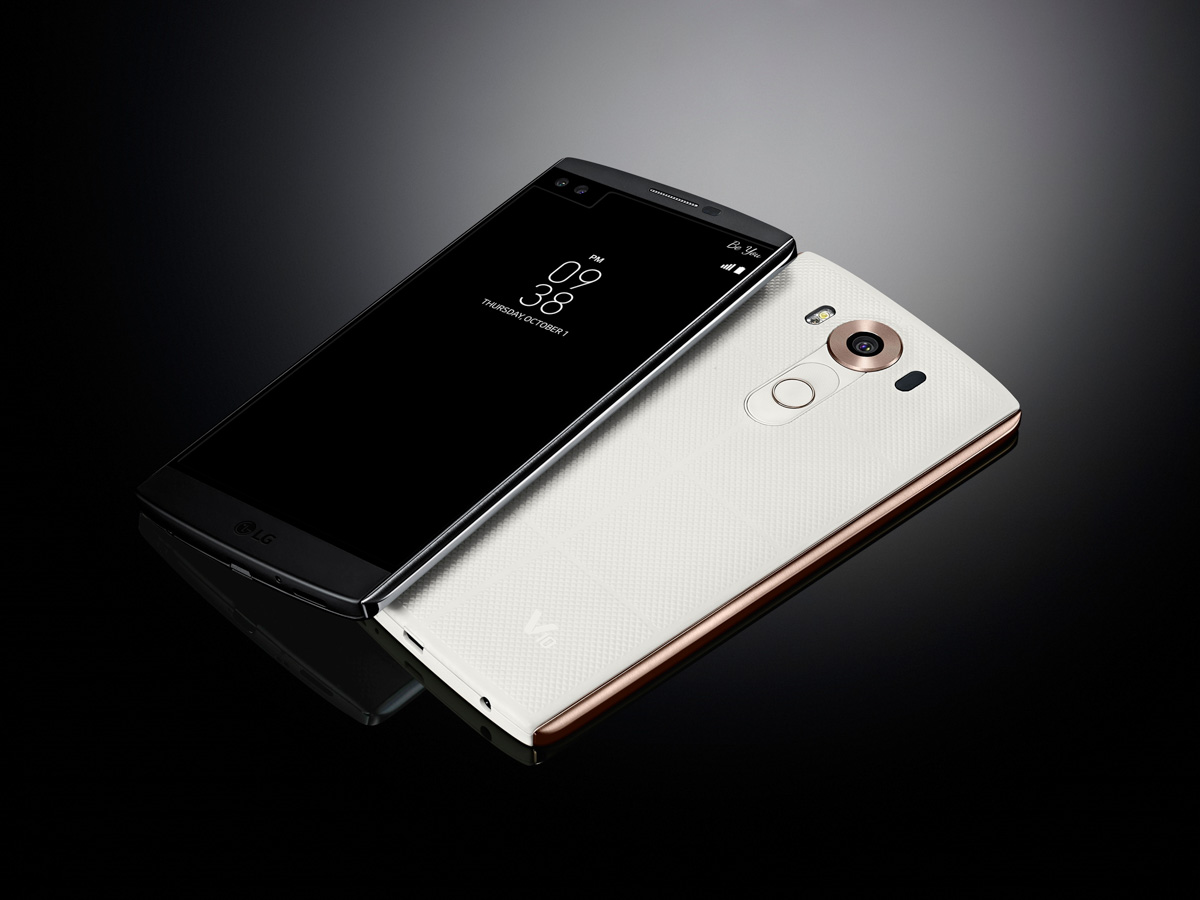