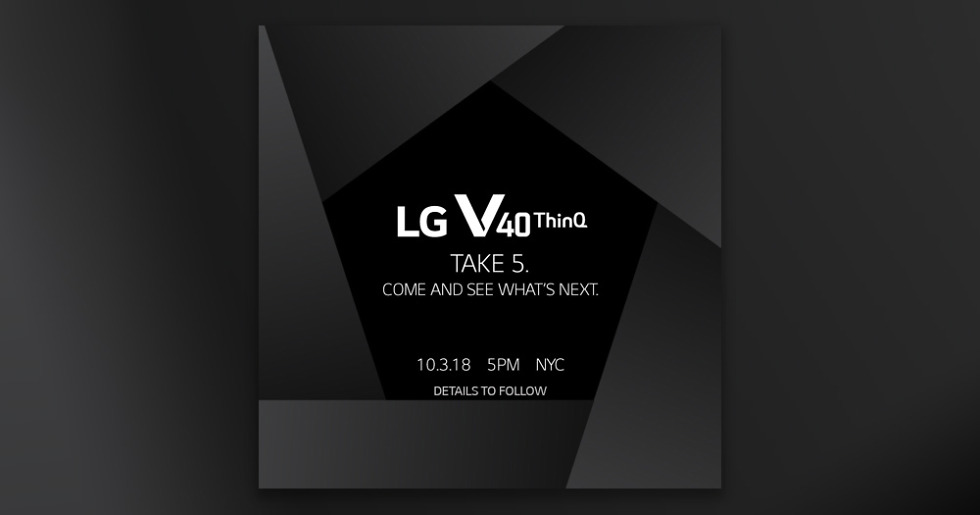 October sure is looking busy! We know that Google will show off the Pixel 3 and Pixel 3 XL on October 9 in NYC, and that OnePlus could unveil the OnePlus 6T on October 17. We also now know that the LG V40 is coming October 3.

LG sent out invitations to an NYC event this morning that does in fact reveal their next phone’s name to be LG V40 ThinQ. It also uses the phrase “TAKE 5” and tells us to “come and see what’s next.”

For those who haven’t been keeping up on the V40 story, it is rumored to have 5 cameras. That “TAKE 5” mention is no random coincidence. We’re assuming that means 3 cameras on its back and another 2 up front.

The phone could look like this too. We’ve also seen it at the FCC this week.

As someone who was a fan of last year’s LG V30, this is one I’ll be paying attention to. I’m not sure 5 cameras are something I’ll care much about, but the experience LG gave us last year with the V series was their best effort to date.

UPDATE: LG posted this teaser, which shows a potential setup that includes a zoom, wide angle, and standard lens.