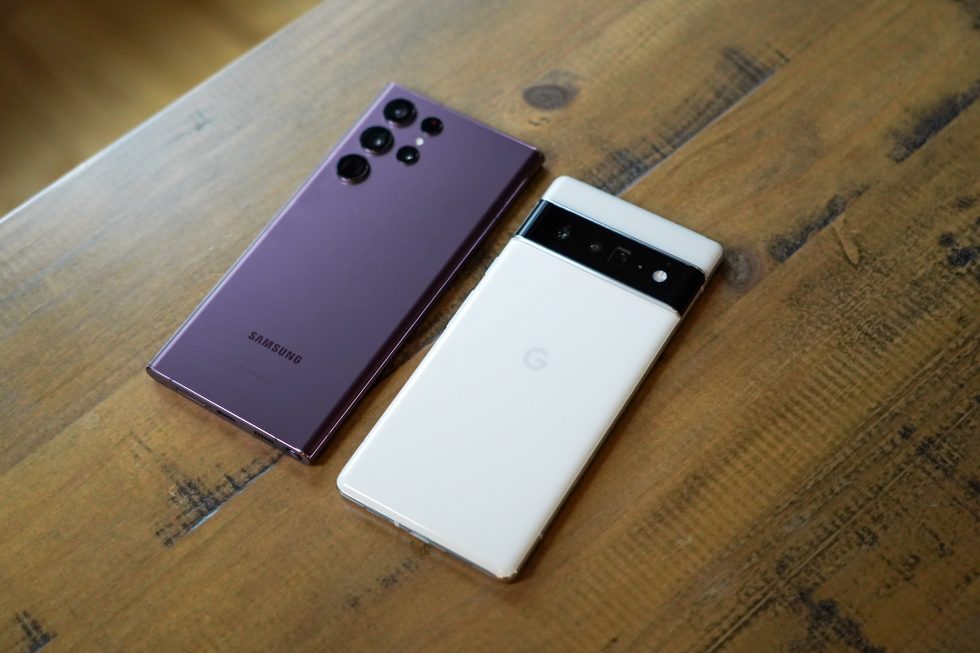 At the end of our review of the Pixel 6 Pro, I suggested that it should top your list of potential phones if you were in the market at the moment. There were too many good things going on at a price well below the competition. With a starting price of $899, there just wasn’t a better value in the high-end phone market.

Of course, I also mentioned that the chances of me sticking with it going forward were slim because the phone was far too big. The Pixel 6 Pro is a massive phone and I’m the type of smartphone user that doesn’t want to carry around a small 7″ tablet at all times. However, after spending the past couple of weeks with the Galaxy S22 Ultra and its big ol’ body, I’ve kind of become used to the size and decided to reach for the Pixel 6 Pro again to see how my opinions might have changed over the past couple of months.

Guys, I think I might be a Pixel 6 Pro user going forward. Let me explain why.

I mentioned this in my Galaxy S22 Ultra review, but I used to be a huge Samsung One UI fan. It was so fresh a couple of years ago that it made me a Samsung fanboy from the Galaxy S10 through the Galaxy S20. Today, I don’t quite feel the same, though. With Android 12 underneath, Samsung hasn’t done much to keep things fresh and has instead shipped a mostly-the-same One UI without any major new features or appearance tweaks. If you were to come from Android 11 and One UI to Android 12 and One UI, you would be hard-pressed to figure what the new standout features are supposed to be.

With the Pixel 6 Pro, we get Google’s latest experience that was introduced alongside Android 12, so it’s very much new and fresh. The bubbly UI, colors throughout, and incredible animations make for a version of Android that feels modern and a step ahead of everyone else. Then when you look at things like the vertical app drawer with quick searching built-in, proper folder layouts, a more playful use of color, and a shorter, more precise feature list that isn’t overwhelming, the OS on a Pixel phone is easy to love.

Don’t get me wrong, the feature richness of Samsung’s Android skin is absolutely a bonus. If you want a feature to do almost anything, Samsung has built that in. However, the simplicity of a Pixel experience, after spending time within Samsung’s, presents such a stark contrast in styles that Google’s ultimately wins, especially since it all just works like I expect Android to. 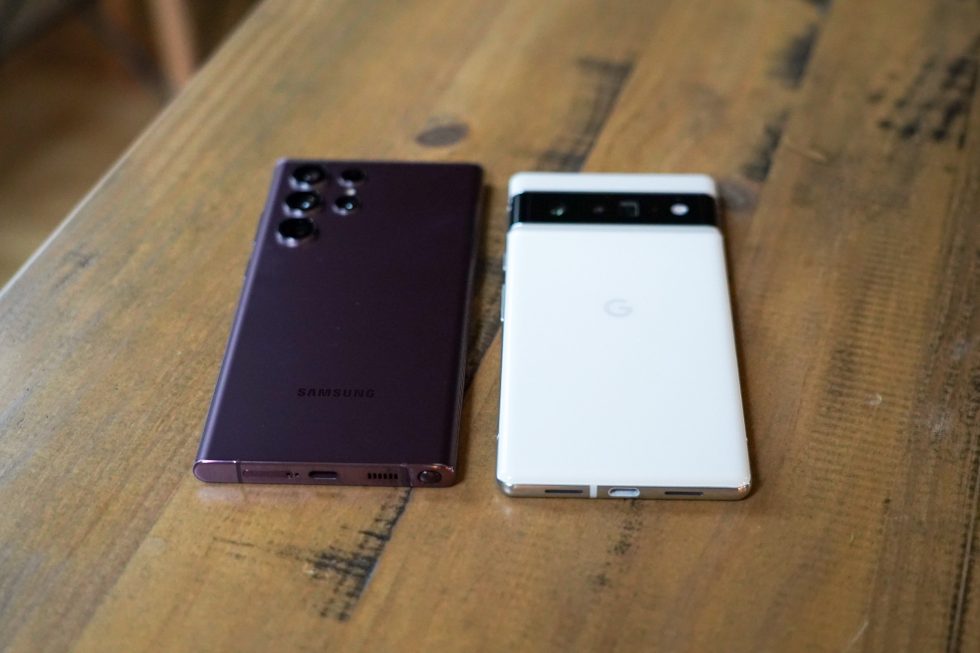 It feels new, unlike the Galaxy S22 Ultra

Outside of the software, one of the other areas that’s stood out to me since switching back for the past several days has been the fact that the Pixel 6 Pro still comes off as being new. I know the phone is months old, but because Google changed it up so dramatically with this phone (by actually trying for once), the design and OS together don’t seem so dated.

For the Galaxy S22 Ultra, (again) as I mentioned in my review, the phone just seems like a slightly upgraded Galaxy Note 20 Ultra, a phone Samsung released in 2020. And again (again), the Galaxy S22 Ultra is without a doubt an incredible phone with good improvements and will undoubtedly make anyone who buys it happy for years and years to come. But as someone who touches new phones for a living as frequently as possibly, I wanted more. I wanted a refreshed design or a big change to software or something to really look forward to that wasn’t just a re-branding of the Galaxy Note line to the Galaxy S Ultra line.

Going back to the Pixel 6 Pro after taking some time away immediately felt good. It’s almost as if I were picking up a new phone again because Google’s Pixel 6 line is that different than anything they’ve done before.

There are little things about the Pixel 6 Pro that won me back over too, like how good the phone’s haptics feel as you navigate around and take advantage of gestures. Samsung’s S22 Ultra haptics aren’t bad, but Google’s (at least in the Pixel 6 Pro) are about as good as you’ll find on Android. The satisfaction you get from swiping into the app switch or the back gesture, especially the feedback from typing, are unmatched and are the closest to Apple’s I’ve used to date.

You can also set the Pixel 6 Pro down on a flat surface and use it without it wobbling like crazy. Trying to use the Galaxy S22 Ultra on a countertop was was painful as it teetered back and forth no matter what you tried to do. The camera bar on the Pixel 6 Pro might be a controversial design element, but at least it lets you use your phone on a table or desk without it pissing you off.

Speaking of being pissed off, and I hate to bring this up for a second time, but the horizontal app drawer in Samsung’s One UI needed to go away 8 years ago and absolutely infuriates me every time I fire up a Samsung phone for testing. I know, I could put on a 3rd party launcher, I just don’t while testing because I want the out-of-box experience. For Christ’s sake, Samsung, can we change this or at least give people the option to flip it to vertical? And on top of that, Google adding a system-level search to the app drawer, sort of like Apple’s, might be my favorite Android 12 setting. I can’t live without it any longer.

For other items, I swear the 120Hz stays locked to 120Hz longer on this phone’s display too (I have zero proof of this, by the way), plus I like that Google puts the power button above the volume rocker. The phone is slightly less-wide, “Now Playing” is one of my favorite features ever put in a phone, and I still prefer the processing of Google’s cameras over Samsung’s as well.

There are lots of little things I think Google does better. 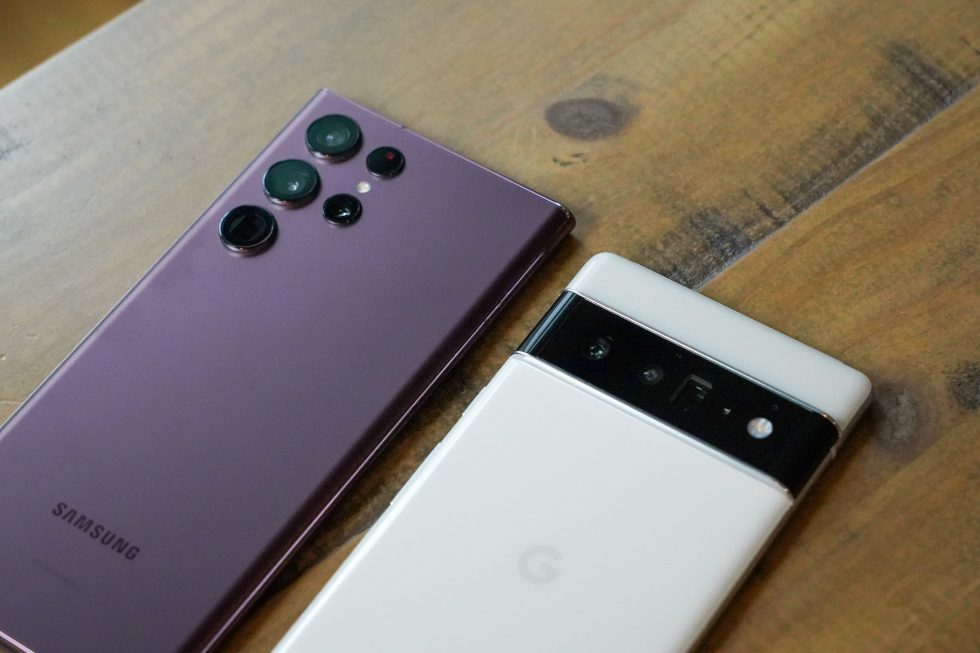 Yes, Samsung guy, now tell me all of the flaws of the Pixel 6

But this wouldn’t be fair if I didn’t point out that Google’s Pixel 6 Pro has not been without its fair share of issues. The phone still gets way too hot when on a cellular connection and with moderate usage, its hardware design is pieced together like a startup would build its first phone, and battery life isn’t the best. Oh yeah, the fingerprint reader is still dogsh*t and will likely always be. I haven’t personally experienced a bunch of signal or WiFi issues like some, but I wouldn’t doubt it if this phone had those. Google should not accept the fact that Samsung has a better update policy either.

By no means is the Pixel 6 Pro a perfect phone.

That said, right now, if I was choosing a flagship-level phone, I’d still probably lean towards the Pixel 6 Pro in most situations. It certainly helps that it’s $300 cheaper.