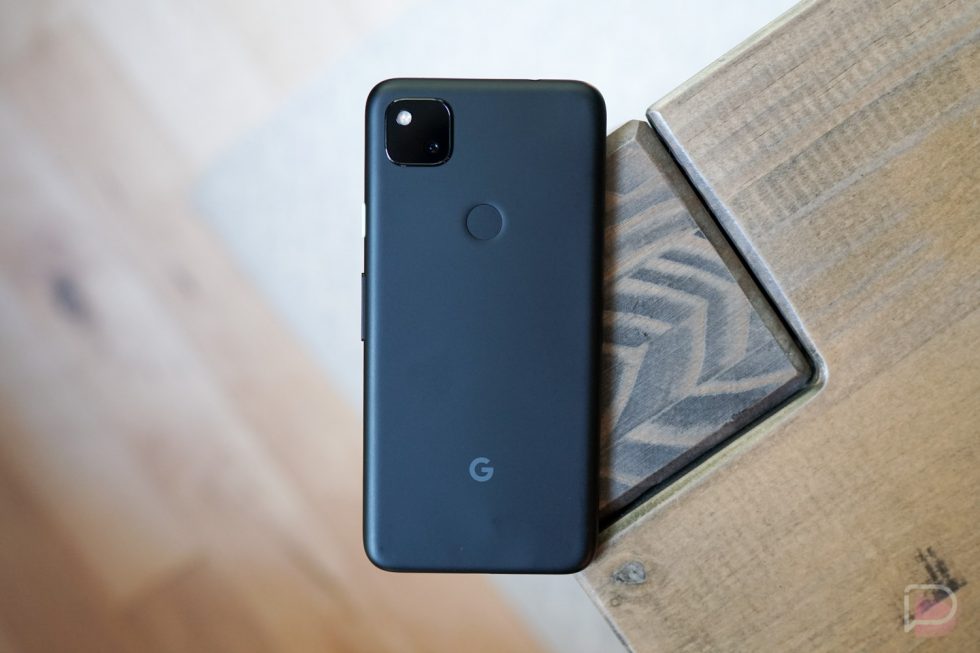 As phone prices have increased dramatically in recent years, lowering expectations some to find a phone that still ticks enough boxes, yet does so at a more appetizing price has become more common. It’s not that the $1,000+ phones aren’t any good or are overpriced, it’s that there are more also-good options at hundreds of dollars less that do the things well that you need the most.

That’s right where Google’s Pixel 3a fit in last year and is once again where the new Pixel 4a fits in this year. It may be later than expected, but Google has once again delivered a Pixel experience at a fraction of the cost. In fact, this year, they’ve gone lower in price while adding even more.

We’ve spent some time with one, so let’s dive in – this is our Google Pixel 4a review. 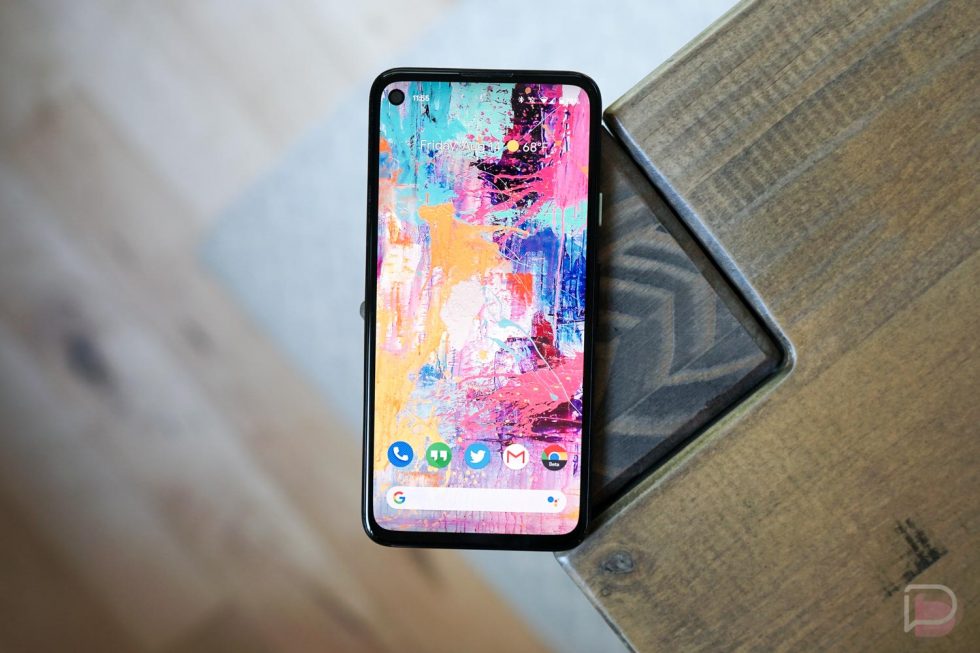 The price is the sell.

You can’t really talk about the Google Pixel 4a without mentioning the fact that it costs just $349.99. At that price, Google is giving you a large-ish 5.8″ 1080p AMOLED display, 128GB storage and 6GB RAM, 18W fast charging, NFC, stereo speakers, 3.5mm headphone jack, a 12MP camera with optical image stabilization, and three years of Android updates.

There really aren’t any similar phones to compare to at the price and for what you get (in the US). Motorola has similar phones, but they almost always foolishly cut out NFC or something dumb like that. Google is also providing the level of software support that few are even doing with their super phones, by stretching out software updates for years to come and through several Android version upgrades.

Throughout the past week, even though I haven’t fallen in love with the Pixel 4a like I did the 3a, I’ve tried to find a phone around the $400 price range that I’d recommend over this and I’m not sure I can come up with one. This is just such a solid package for the money.

For this year’s Pixel 4a, Google tossed in the familiar 12MP sensor (f/1.7, OIS) that has been in so many of their phones in recent years. Since it’s not exactly new, testing it isn’t that difficult. You should already mostly know what to expect – the results are good. 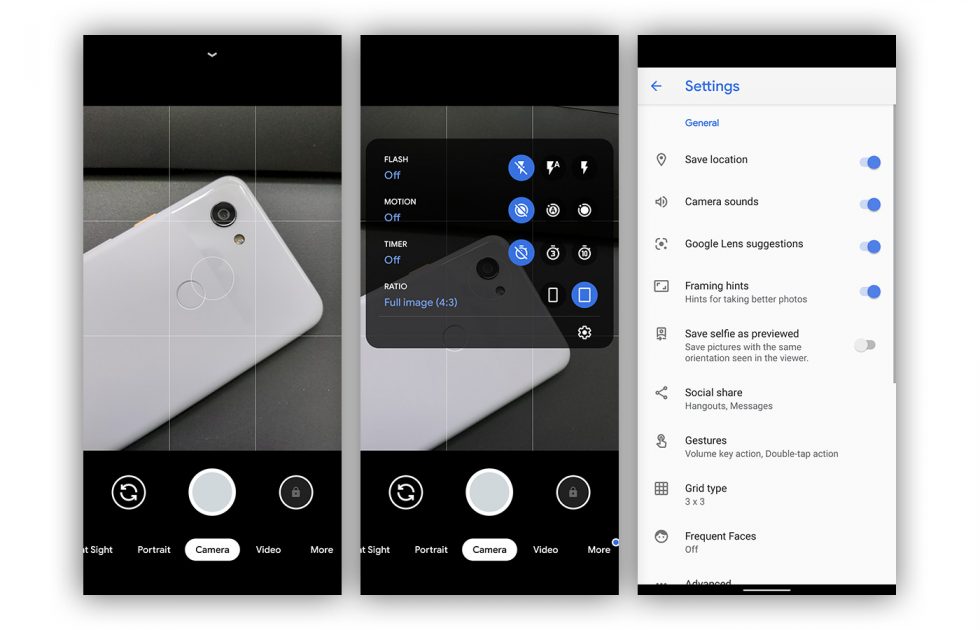 Google’s camera app hasn’t changed either, so you get a mostly minimal experience that lets you easily jump between modes (including Night Sight and Portrait) and snap at will. Video goes up to 4K/30fps, you can take pictures of the freakin’ stars, and it loads fast enough.

There are limitations compared to other phones in that you only have a single lens. You won’t find wide-angle or telephoto lenses, super high resolution 108MP photos, or super mega 100x zooms. But if you just want a camera that takes really nice still shots in almost any lighting condition, has a solid portrait mode, and is your best friend when out of the city and staring up to the sky, the Pixel 4a delivers. 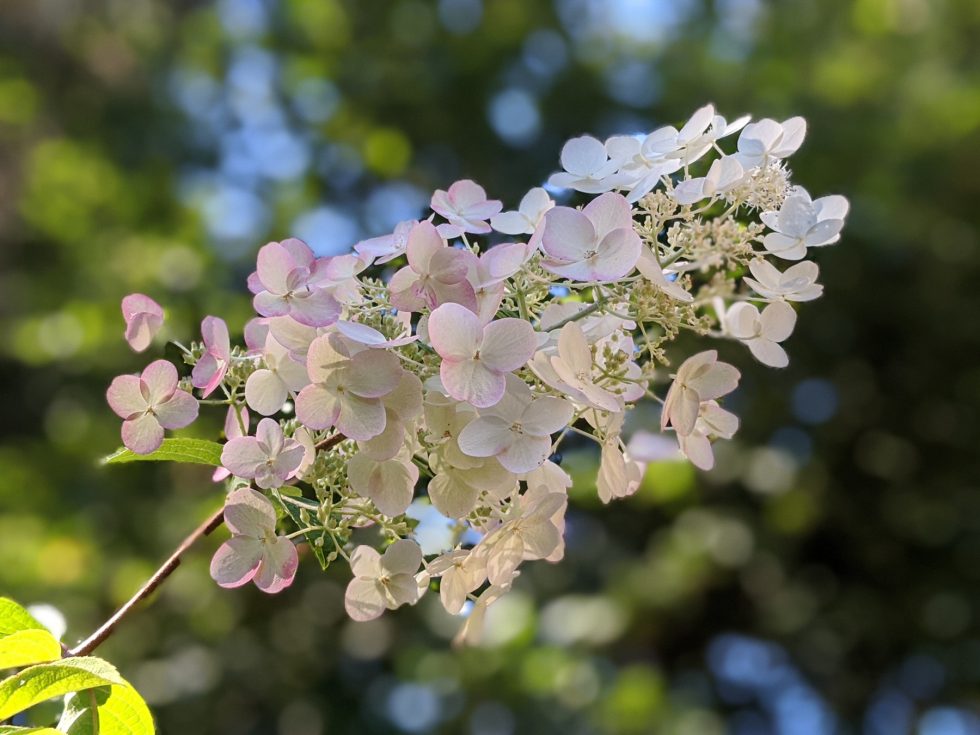 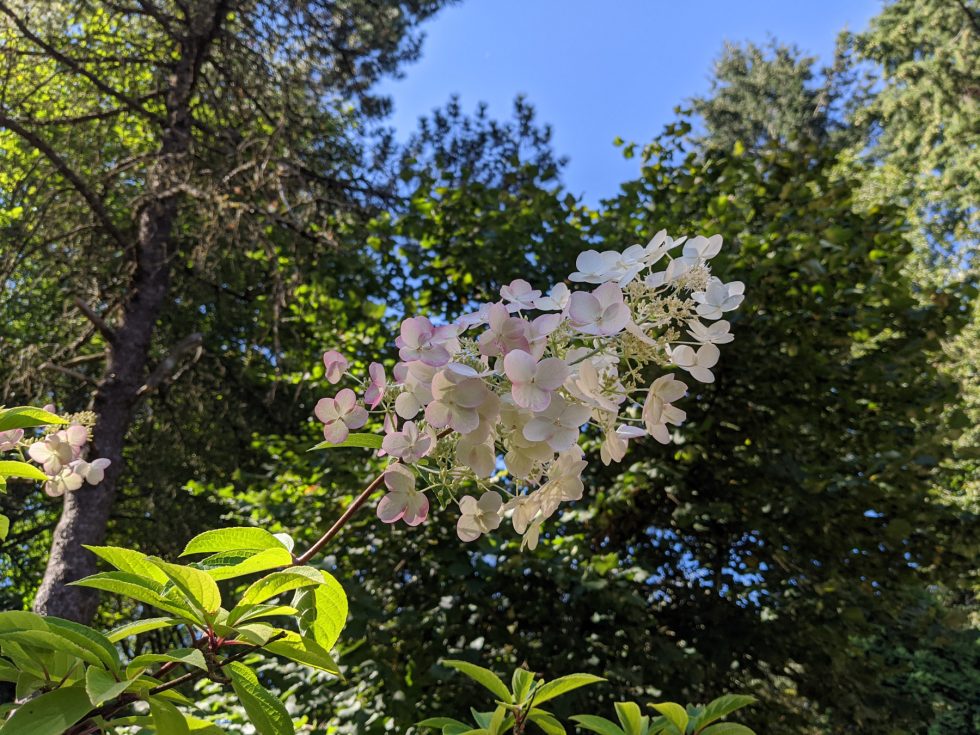 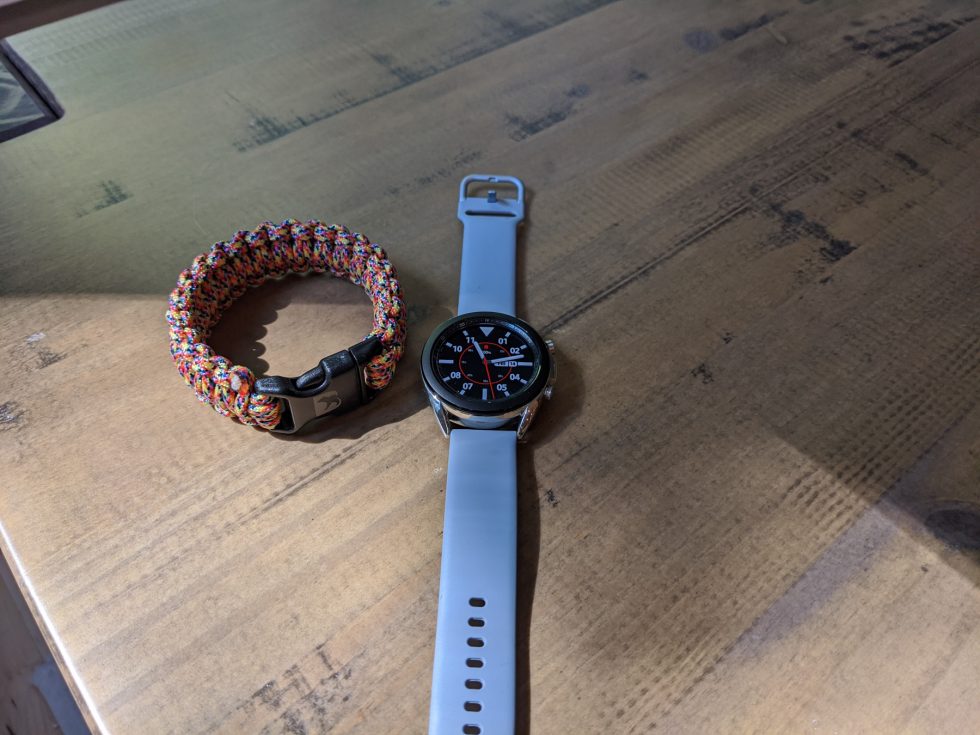 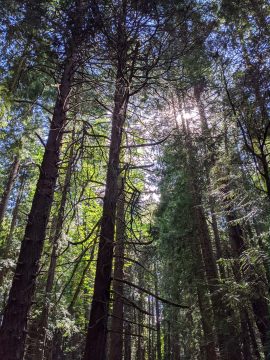 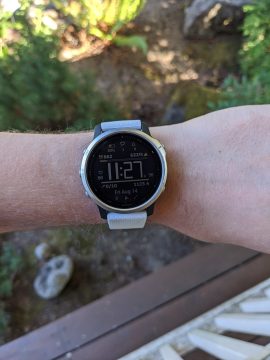 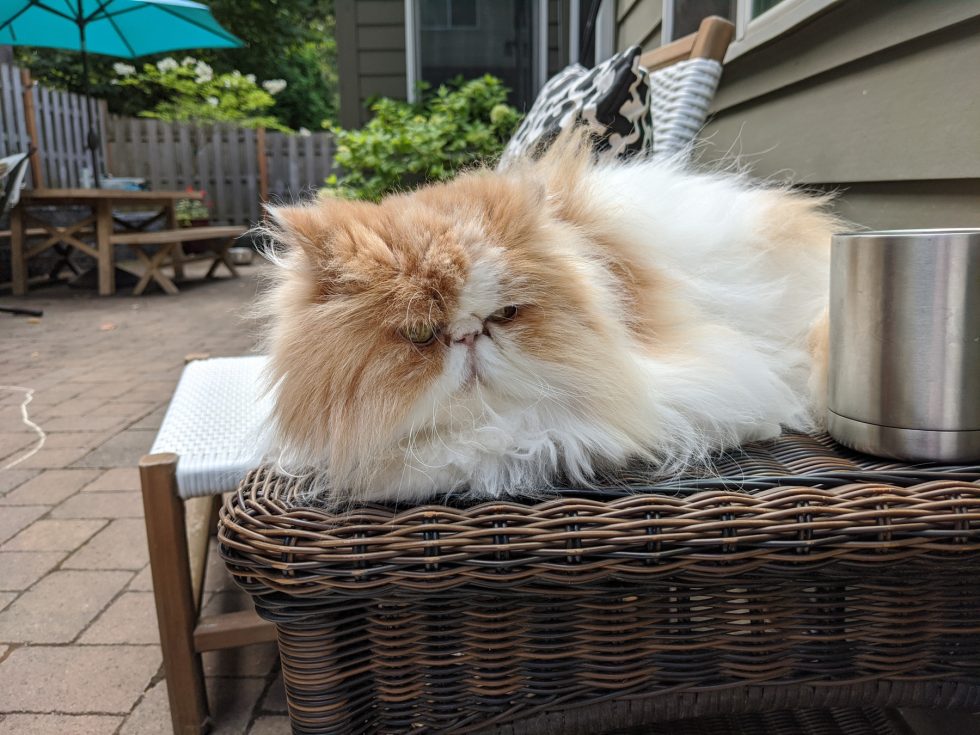 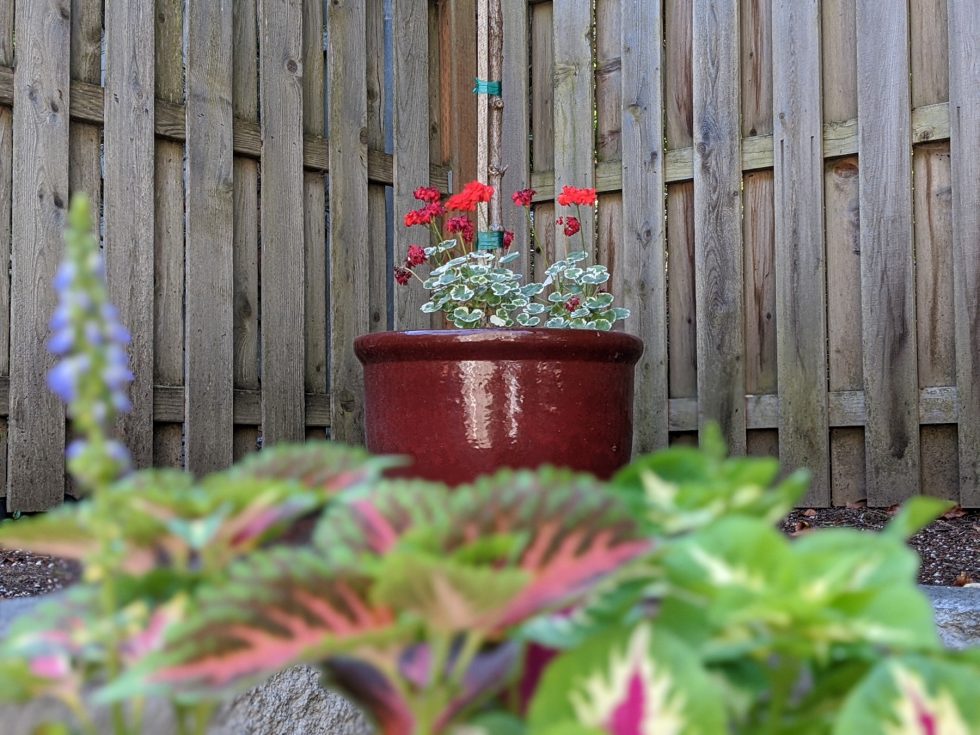 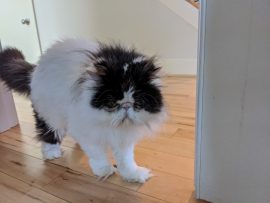 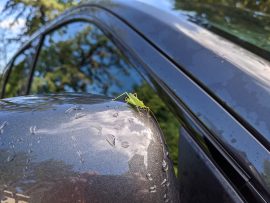 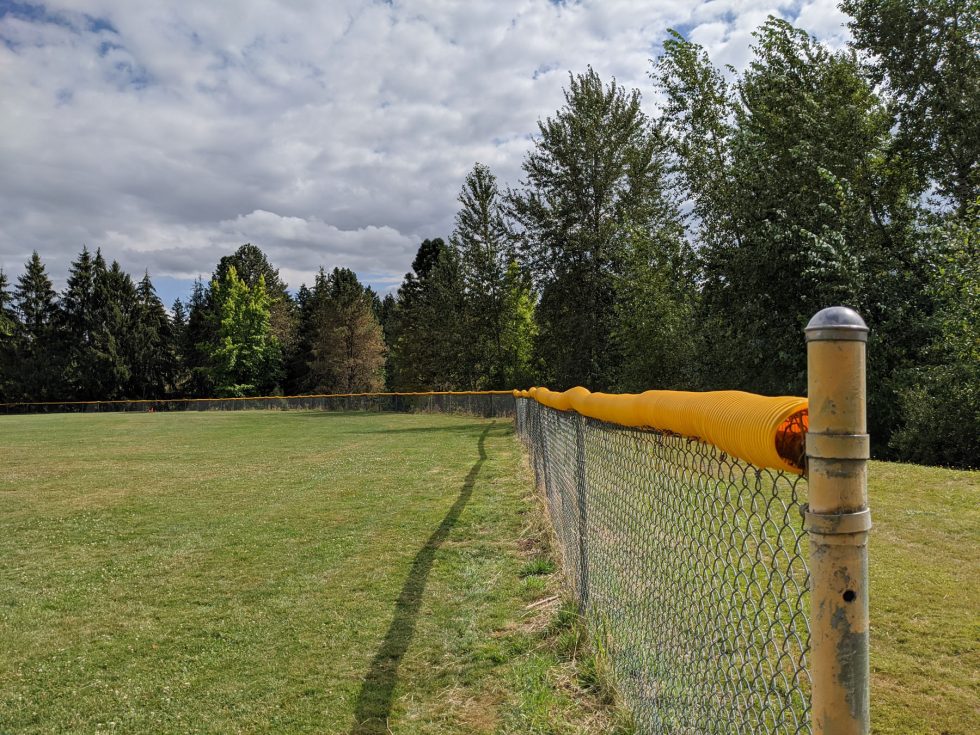 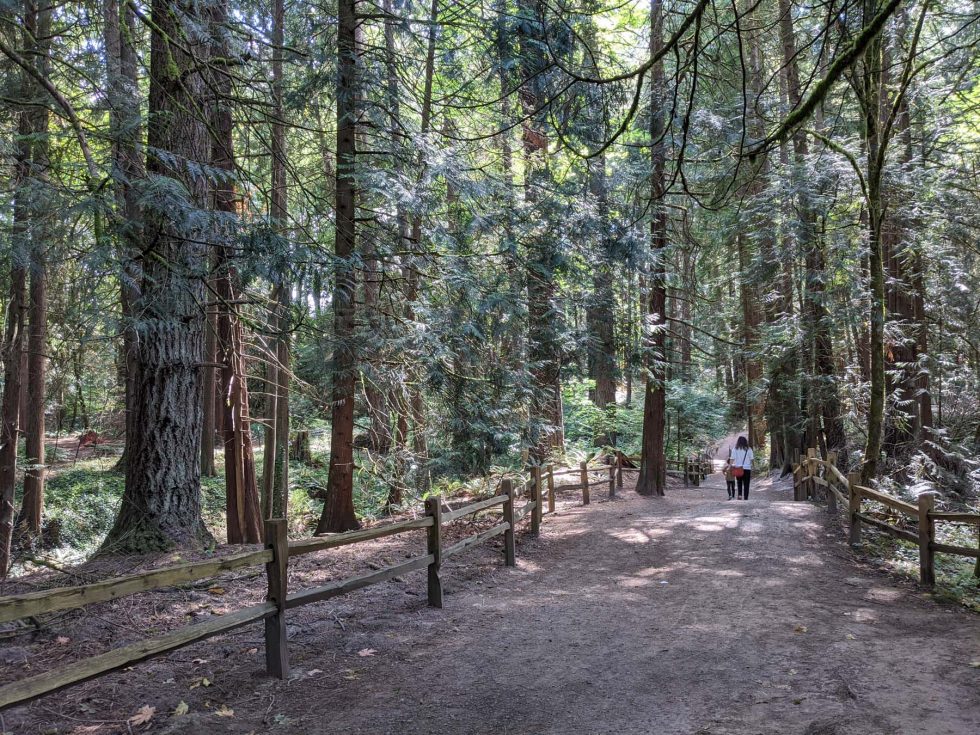 For whatever reason, I went into reviewing the Pixel 4a telling myself that this phone better last two days on a single charge or it wouldn’t be good enough. With the lower-tier chipset and 60Hz display, I wanted industry-leading battery life. I never found that, but you know what? That’s fine. The Pixel 4a and its 3140mAh battery will easily last you through a day, where you’ll then throw it on a charger. That’s good enough for $1,000 phones, so it’s good enough for this one.

During my testing, my usage jumped from lighter to heavier depending on the day. Some days that meant 2-3 hours of screen on time, while others hit between 4-6 hours. My heaviest day jumped past the 5-hour mark and 23% battery remained. On a lighter day, I had the phone on less than 3 hours and that showed with 41% battery at bedtime. 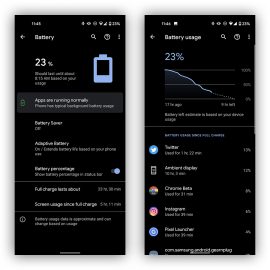 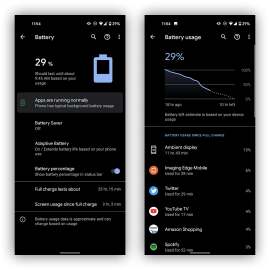 Never once did I need to find a charger before going to bed. Almost every single night, I’d grab my bedside charger with 20% or more remaining, which is pretty damn good.

There’s no wireless charging on this phone, but at $350 that’s not something to complain about. It has 18W fast wired charging and can be juiced up or topped off in no time.

There’s nothing new or unique about the software on the Pixel 4a and that’s perfectly fine. You get Android 10 out of the box with Google’s Pixel Experience. That means clean Android with a handful of useful features baked on top to help separate Pixel phones from just being a stock developer device. 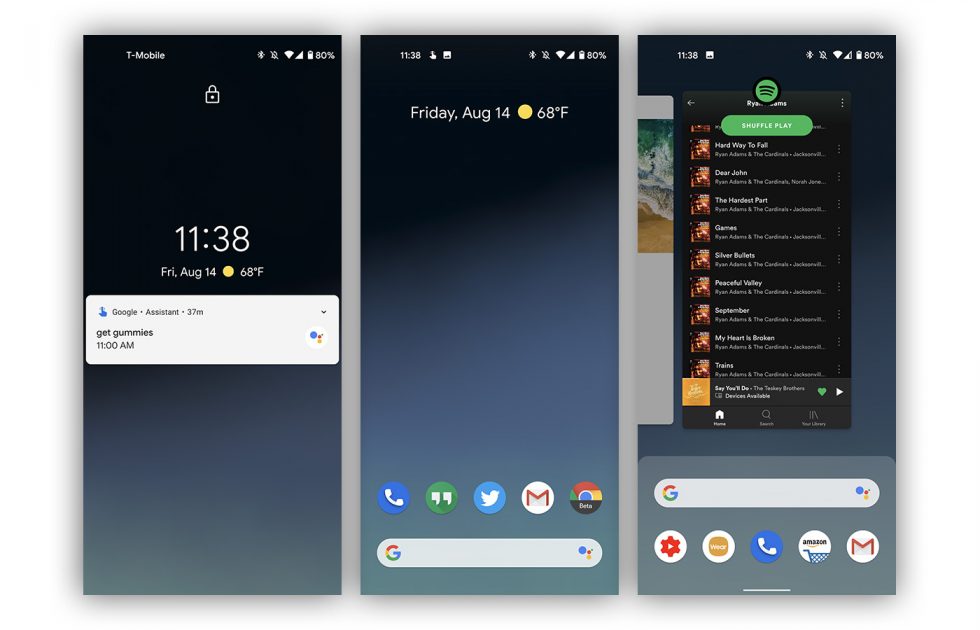 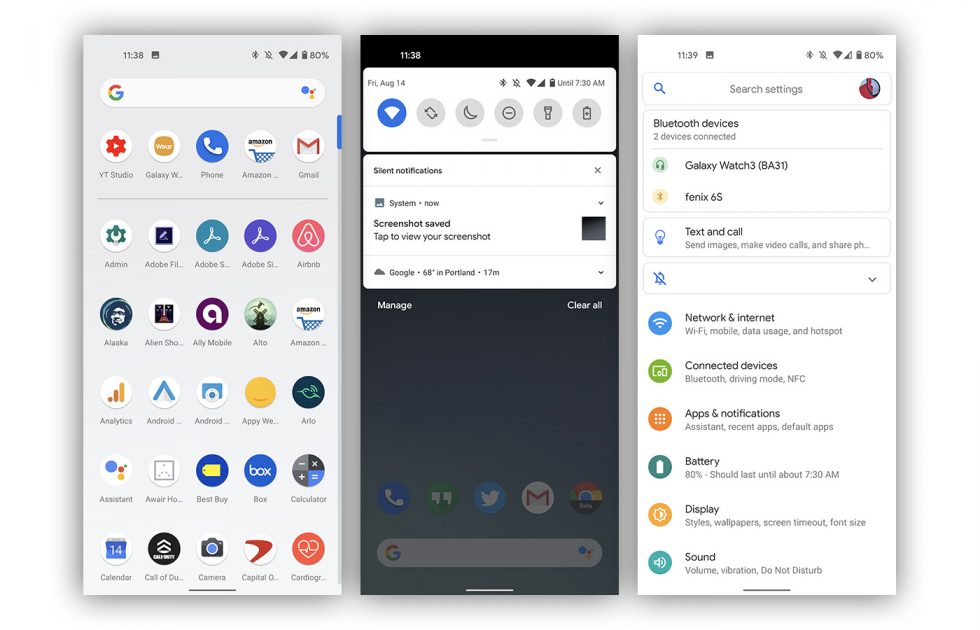 You’ll find gesture navigation, several gesture shortcuts to perform things like opening the camera in a hurry, a heavy Google Assistant influence, battery and brightness optimizations, always-on display, Digital Wellbeing baked in, access to Google’s Discover feed, and that’s sort of it. There isn’t a special standout feature for this phone, you just get what Google does best – the basics.

As I mentioned earlier, Google will provide software support for this phone for three years, so you’ll get updates through August 2023. That could mean updates to Android 11, 12, and 13, depending on when 13 launches. There aren’t many Android phones on the planet that will be supported this long.

The display is the piece of your phone you look at the most, so you hope that it’s decent even if your phone doesn’t cost an arm and a leg. The Pixel 4a’s display totally delivers, probably beyond what you’ll pay for it.

For one, it’s an AMOLED, so colors generally look juicier, your blacks are better, that sort of thing. Where this phone surprised me was in brightness, where it looks fine out in the sun at max brightness and still gets dim enough in dark situations. I talk a lot in reviews about brightness range, and while the Pixel 4a is far from the best (that would be the Galaxy S20), I don’t think most people will find issue. Oh, viewing angles are also more than fine. 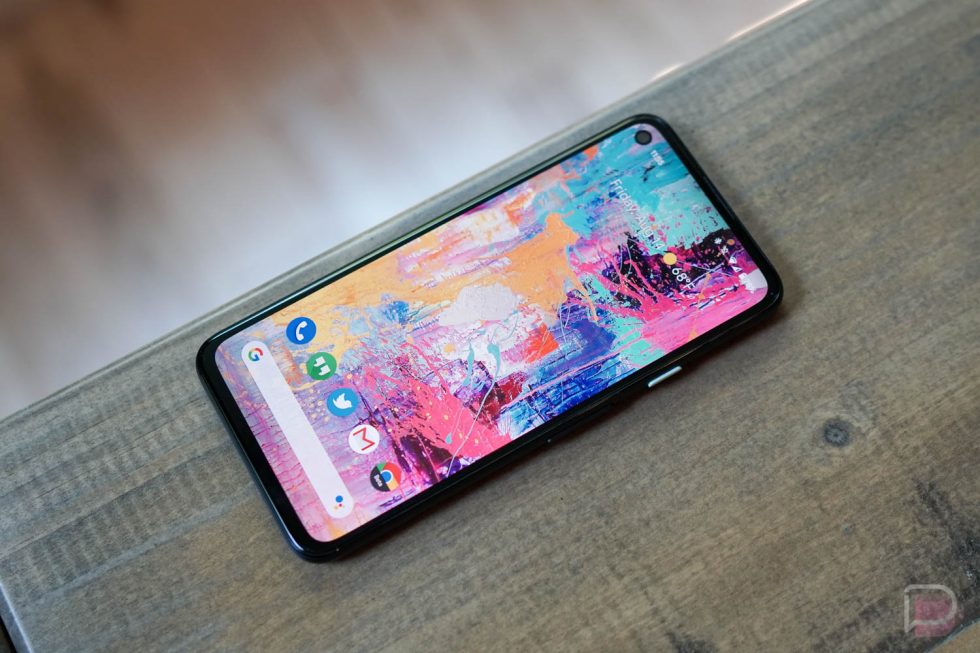 I do wish Google would offer up more color profile controls. You get choices of Natural, Boosted, and Adaptive, none of which noticeably change the colors. Google needs to add in cool-warm controls at a minimum to Pixel devices, but they should take it further with RGB controls like almost everyone else is doing.

My only other complaint is the expected one, and it’s about the 60Hz refresh rate. At $350, I know that I shouldn’t expect 90Hz or 120Hz, but it’s what I’m used to and so I’ve noticed every single day that this phone transports my eyes back to 2018. While consuming still content (some video too) and not scrolling much, this display is perfectly acceptable. Scroll a bit in anything and you’ll know why it costs what it does.

There’s no Pixel 4a XL this year, so that means a single size for the line. For those of you used to holding your 6.5″ phone, this phone’s size will shock your fingers. It’s quite small and even took me, the guy who prefers smaller phones, some time to adjust.

Being as small and one-handed as it is, the Pixel 4a provides a good bit of freshness. It’s light, fits in any pocket, and won’t bring you that fatigue you might find in another, bigger phone. Reaching the notification area is easy, buttons are in the right places, and it generally feels like a phone you are in complete control of. I haven’t had that in a long time.

Look, I get that the phone costs as little as it does, but you’ll know it the minute you pick it up. And maybe you don’t care! I’m just telling you that the Pixel 4a feels even a step below last year’s Pixel 3a.

The 3a was plastic, yet it felt like nice, soft-touch plastic – almost premium plastic. It also had some character with its polished top and frosted lower, as well as color options of white, black, and purple. The Pixel 4a is lousy black plastic with zero personality outside of a greenish power button. 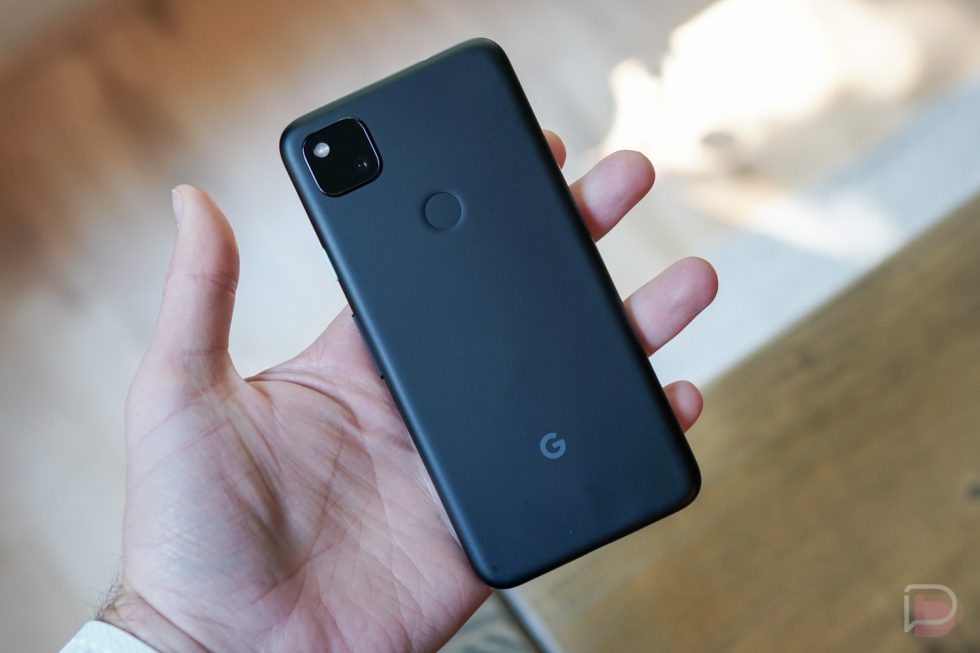 The Pixel 4a runs a Snapdragon 730G, a processor I couldn’t tell you a single stat or spec about. This is my first experience with it and the only opinion I have on it so far is that I’m not super impressed. This Pixel 4a has stuttered and jittered its way through almost everything I’ve done over the past week. Now, there is likely a reason I may be noticing this more than ever, but I’m also not sure that reason should still remain this far into testing.

I’m talking about the refresh rate of the display. This phone sports a 5.8″ AMOLED display with a 60Hz refresh rate. I haven’t used a 60Hz phone since before the OnePlus 7T launch in September of last year. I’m basically a year into using nothing but higher refresh rates, so this has been a jarring return to the display experience of old. 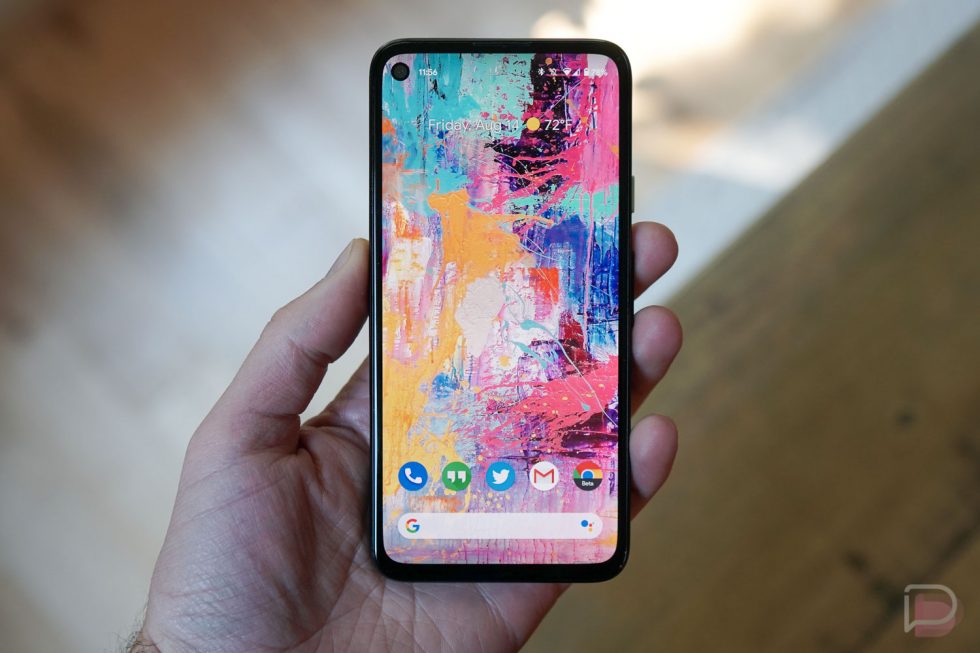 Coming from phones like the Pixel 4, OnePlus 8 Pro, Galaxy S20, and OnePlus Nord have left my eyes wondering if they are broken or not. The mushy pixels as you scroll, the jumpy transitions in and out of apps, and general sluggishness is all so painfully obvious. But again, I thought that view would change as my testing progressed, yet here I am telling you that it’s still a thing.

I hate to sound like my experience using the phone has brought back memories of old garbage phones and that the phone is unusable. That’s not at all the case. I’ve been able to do everything I want to do on this phone, it’s just that none of it looks as pretty as I’m used to and there’s a noticeable pause or stutter or missed frame or something along those lines as I do most tasks. Will you notice or care, especially when you only spent $350? Probably not.

First 10 Things To Do

Should you buy a Pixel 4a?

Since the Google Pixel 4a is a budget phone, assuming you are reading this on a budget, you probably should buy one. The Pixel 4a ticks a good number of boxes (solid camera and battery life, good display, long software support, and cheap price) without a lot of compromise. While it may feel cheap in the hand, stutter here and there, and lack personality, it’ll bring you a better-than-expected experience.