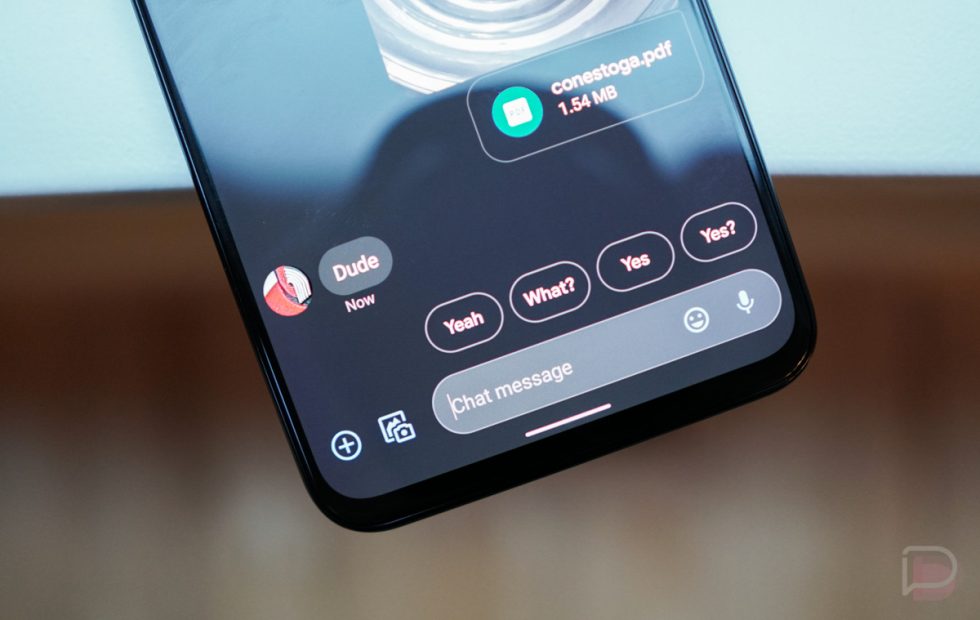 The story of RCS is a long, multi-year tale filled with early unrealized promises, ounces of hope crushed by wireless carriers, the snakiest of moves by those same carriers, and an eventual power play by Google to help establish the future of text messaging on Android. I don’t really want to go back into it all as the story has been told enough, but what I do want to talk about is how RCS involves you and what your next conversation with friends and family should be to get everyone on it.

RCS, to keep it short, is the future of text messaging on Android. I’m not including iOS and iPhones in there, because they have iMessage and Apple uses it fully to their advantage to not only keep its users locked to iPhones, they also use it to lure in non-iPhone owners who feel locked out of social situations. Apple has shown no interest in supporting RCS. So yeah, RCS is for Android users (for now) and it could be pretty cool once everyone has it.

What is RCS or “Chat” messaging?

RCS or “Chat” is the future because it’s an advancement on SMS or old school text messaging. It uses your phone number and lives within a text messaging app, just like you might use now. That means to use RCS, you really don’t need to do anything different than you already are outside of making sure you have a supported RCS app as your main messaging app.

The big difference between your current SMS or texting solution and RCS is that RCS messages are sent via mobile data or over WiFi, unlike SMS. That basically just gives you better access to messaging, as well as more features.

RCS will let you be a part of bigger group messages, send full resolution photos (and possibly videos), send read receipts (letting others know when you read their message), and show typing indicators (so people know you are responding). While those may not sound like super groundbreaking or game-changing features, I think most will really learn to appreciate them once they have them.

You’ll notice I referenced RCS as “Chat” above and that’s because Google has labeled it as such. It’s probably a marketing or clarity move, because RCS sounds like a drugstore and “Chat” is a very familiar messaging term.

How can everyone get RCS or “Chat?”

So the thing with RCS at this stage is that Google went ahead and made it available to everyone in the US, but only through their specific Messages application. Since their Messages app isn’t on every single Android phone, this is where you might need to do a little work to get everyone on the same page as you.

Today, to get RCS or “Chat,” you install Google Messages (it’s free) and update your Carrier Services app. With those two installed and up-to-date, you will be able to turn on Chat.

If your mom or brother or bestie owns a Samsung or LG phone, there is a good chance that they don’t have Messages installed. They may have a messages app or another called “Messages,” but it’s likely the one Samsung or LG built and included with their phone. You’ll want them to install Google’s, which we’ve linked below.

Setting up RCS in Google Messages

Once you have Messages installed and Carrier Services updated, turning Chat on is pretty simple. First of all, Google may prompt you right away to “upgrade” your experience in Messages. A tap on a button to do so will fire Chat right up.

If that doesn’t happen, all you have to do is open the app, tap the menu in the top right corner, choose Settings then “Chat features.” On the next screen, you’ll toggle the option to “Enable chat features.” 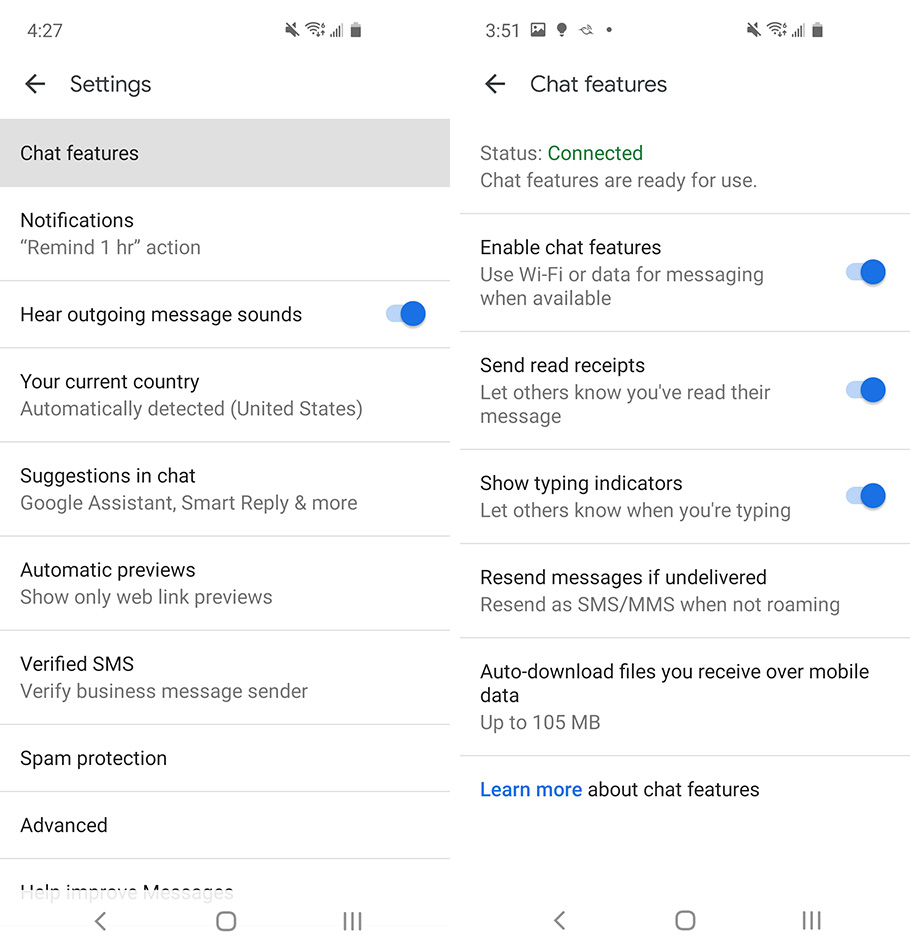 You should see the app attempt to verify your number or ask for a number to verify. It may also just fire right up and work. You’ll know when it says “Status: Connected” that Chat is up and working. If you run into issues with it verifying your number, a quick reboot of your phone should do the trick.

As you can see from the image above, you are able to turn Chat features on and off that you don’t want. For example, if you don’t want to send read receipts or let people see when you are typing, you can turn those options off.

Getting everyone to install Messages and updating Carrier Services is a big first step, but how can you tell if you are sending RCS/Chat or SMS messages? The app will tell you pretty clearly.

When you are in a conversation that has Chat available, the messaging box will say “Chat message.” When you are going to send a regular ol’ text message, the chat box will say “Text message” and you will lose all of those Chat benefits we talked about. 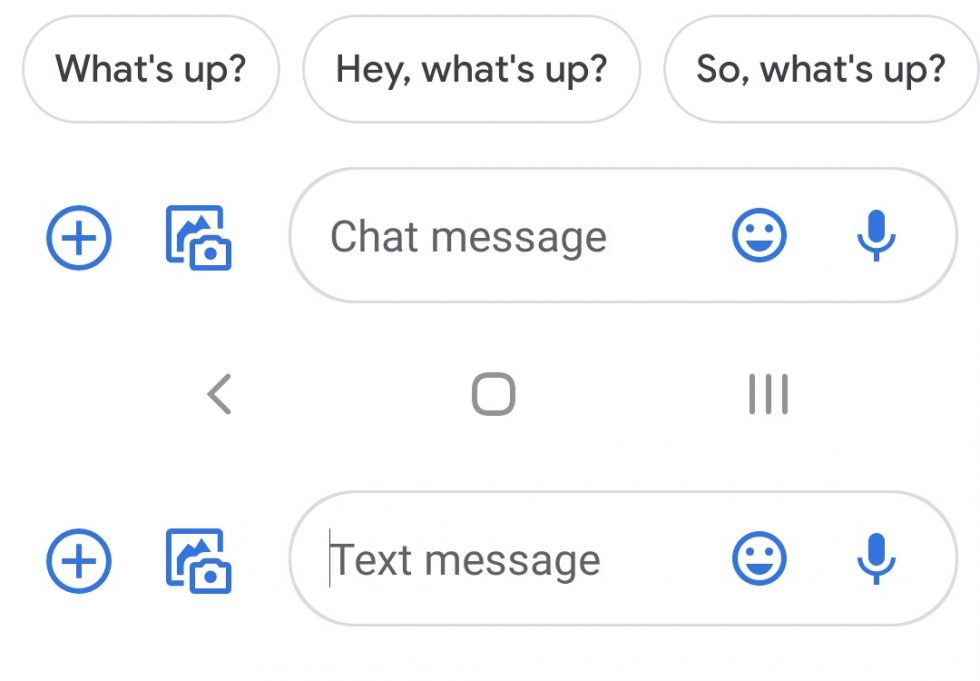 The other way you can tell is because you will get different colored blue message bubbles. Chat messages are sent with a darker blue bubble, while text messages will show with a lighter blue bubble.

Is Google Messages any good, though?

This whole thing would be silly if Google Messages was a bad app, right? You wouldn’t want to switch to Messages and tell all of your friends and family to if the app was bad. As it turns out, Google pays quite a bit of attention to Messages and has packed it full of nice features to play with.

You can send group messages and photos or videos, of course, but you get things like the Google Assistant built in, location sharing, easy GIF search and attachments, stickers and sticker packs, contact sharing, and file attachments. It’s all pretty much there as a modern messaging app. 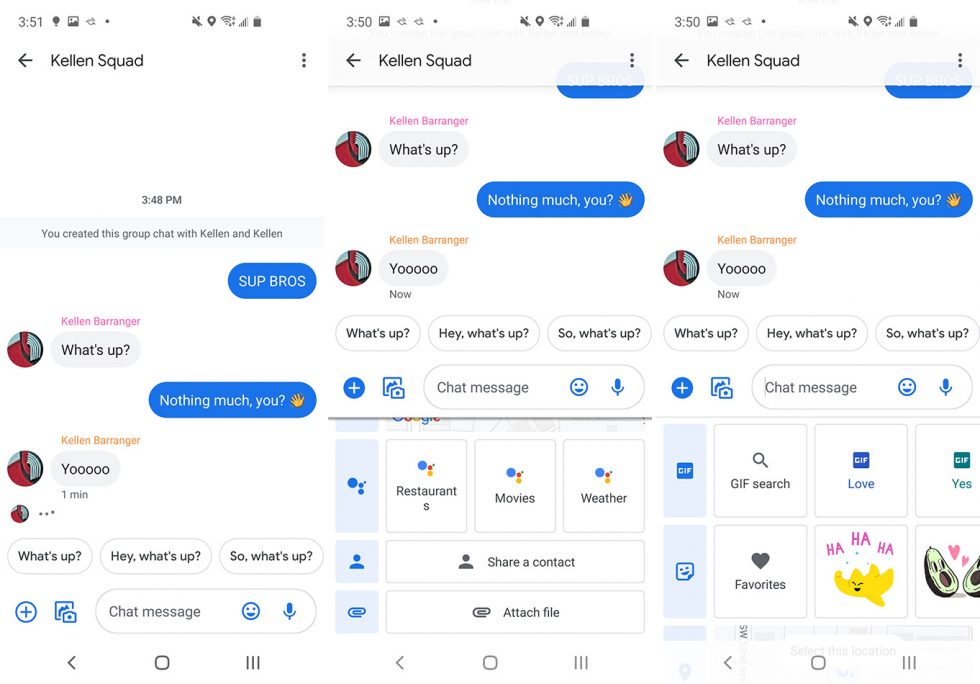 You even get access to Google Messages on the web. Should you use a computer all day, you can connect your phone and Messages to any computer you are using by visiting messages.google.com/web and scanning a QR code from within the Messages app on your phone. Once you’ve done that, you can then send both SMS and Chat/RCS messages.

If we want to get to a place where we all have RCS on our phones, we are early enough in the game that we need to do a little work. We are going to need to ask people to install Google Messages and make sure their Carrier Services app is updated. That’s mostly it, though. Once you’ve done it and flipped a single switch, you then get to enjoy a better messaging experience.