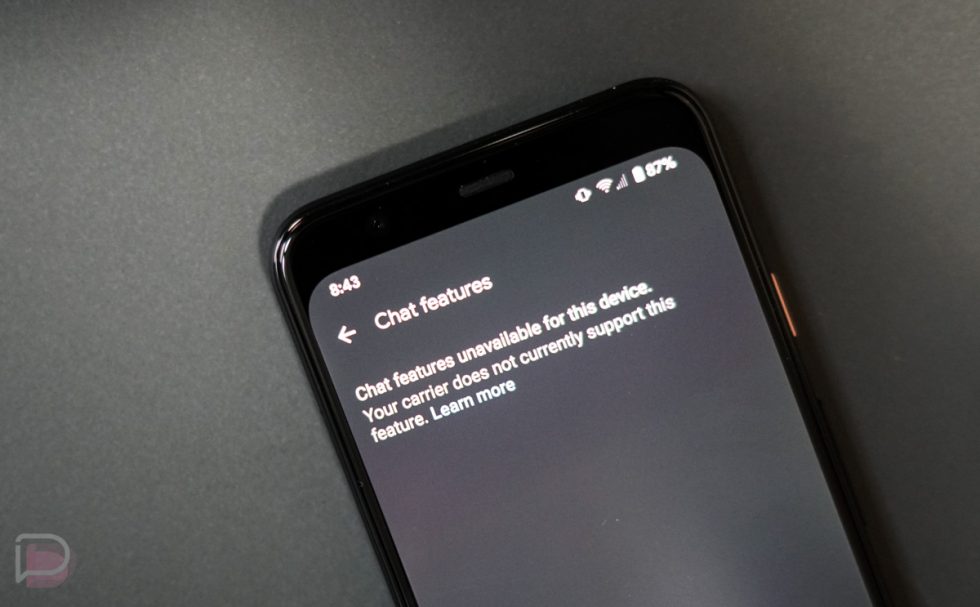 At the “Made by Google” event earlier this week, Google was super excited to announce that they had expanded their partnerships and would launch the new Pixel 4 through every major US carrier. This was a first for Google, who had exclusively (and mistakenly) tied itself to Verizon for 2.5 years, but also a big opportunity for them to push a few extra phones out the door in a country that still heavily relies on carrier sales.

With wide carrier availability, I couldn’t help but consider this might be the perfect opportunity for Google to push another of its ideas now that it had its flagship phone everywhere. I’m talking about RCS or Rich Communication Services, the “Chat” service that Google hopes will one day replace text messaging. Since this is the first time we have seen the same Google phone at all carriers, and Google’s phones have been some of the first to adopt RCS, what better way to give that initiative a kickstart than by using Pixel 4 as a launchpad? Heh…heh heh.

As it turns out, there is no big RCS push with the Pixel 4 and Pixel 4 XL.

I can tell you that one of the first things I checked for after slapping a Verizon SIM into my Pixel 4 review unit was “Chat” features. I was greeted with dreaded “Chat features unavailable for this device” and that “Your carrier does not currently support this feature” notices. That’s odd, right? The Pixel 3 and Pixel 3 XL both support RCS at Verizon, so why wouldn’t these? Ahhh, the life that is RCS.

Since the Pixel 4 and Pixel 4 XL were announced, both T-Mobile and Verizon Twitter support accounts have confirmed that “right now” RCS is not supported on the Pixel 4. We don’t know AT&T’s stance on RCS, only that they are supposedly onboard with it as a concept and supporting operator of the RCS standard called Universal Profile. Sprint, well, they’ll probably add support to the Pixel 4, as they have been early adopters in the technology.

Thanks for reaching out to us today. As of right now RCS is not supported by the Google Pixel 4. Does this help? ^DRS

Hey there, Thomas. Great question! No, the new T-Mobile Pixels do not support RCS at this time. DM us with additional questions. Thanks! https://t.co/xa3Nj2eHVd ^AlishaCombs

You see, that’s the big problem with RCS and why I called it “dumb” a few months back. Rather than force the adoption, Google is relying on carriers in the US to implement RCS, which some have done on a phone by phone basis. It’s more technical than just that too, since some carriers have their own RCS platforms that may not talk to another RCS platform, completely killing the entire benefit of RCS. It’s a f*cking mess that has no fix in sight unless Google takes control.

And we know Google can take control. We have seen Google push RCS to Android phones without the help of carriers in other countries. Back in June, Google began pushing out RCS to all Android phones in the UK and France, through their Android Messages app. They did this without carriers signing off on every single device. Google’s Hiroshi Lockheimer then announced a month or so later that they had completed that rollout and would start on a new wave of countries “soon.” He also noted that they’d love to “work with our US carrier partners on RCS,” since this forced rollout didn’t appear to be making its way to the US. You see the problem there, don’t you? In other countries, Google is doing it alone, but in the US, they want US carriers to help? Ugh.

Of course, all of these carriers could add support for RCS on the Pixel 4 down the road. I wouldn’t be shocked if at least a couple of them do over the coming months, but what a missed opportunity. This could have been the launch of Pixel 4 on all carriers and a way for Google to showcase its vision for the future of cross-carrier messaging outside of an iPhone.