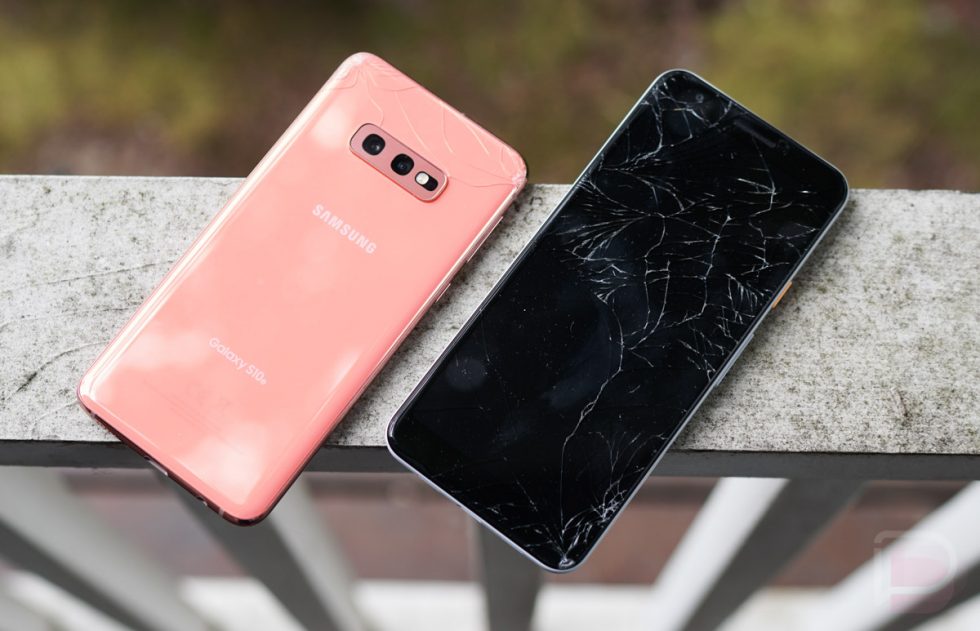 I’ve accumulated a couple of cracked phones in recent months, thanks to my resistance to cases and having a 5-year old around. Because both phones happen to be phones (Galaxy S10e and Pixel 3a) I like a lot and do not want to pay to replace, I decided I’d go the uBreakiFix route to get them freshened up and back in working condition. And since some of you may be curious how this process works, I figured I’d at least document it for those who have questions.

Before we get into this, just know that this is in no way sponsored. I really do have a couple of broken phones that I want to get fixed, have used uBreakiFix before, and thought sharing the experience was worth it.

OK, this is how uBreakiFix works!

Step 1: Decide if your phone is worth replacing or fixing!

This seems like a common sense step, but the most important thing is to decide if your phone should be replaced or fixed. If your phone is a couple of years old, there are all sorts of ways to get new phones for cheap these days, so spending $100 on a repair may not be worth doing. However, if your phone is newish or not paid off or you just really love it, a quick 2-hour fix could be the play. Fixing a $700 phone for $100 isn’t awful, but fixing a $400 phone for $100 might be a tougher decision.

Also, keep in mind that uBreakiFix is an official repair partner for Samsung and Google products, so you’ll get genuine parts. In fact, when uBreakiFix needs parts for Samsung phones, they order them directly from Samsung, at least that’s what they told me.

Step 2: Pick your closest uBreakiFix store and see prices for the service you need

Once you head over to the uBreakiFix website, you should first plugin your zip code to find the nearest store. In order to see pricing for services, you’ll need to actually select a store.

After doing that, you start walking through their repair system where you choose your phone and the service you need. Assuming you chose a store, you should see pricing for services. uBreakiFix does price match local competitors and beat those by $5, so if you think their prices are high, feel free to do a bit of shopping around. 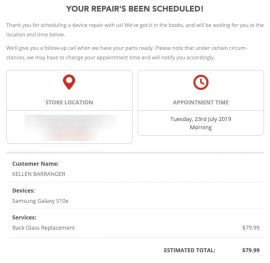 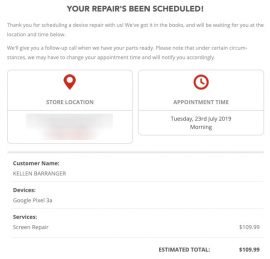 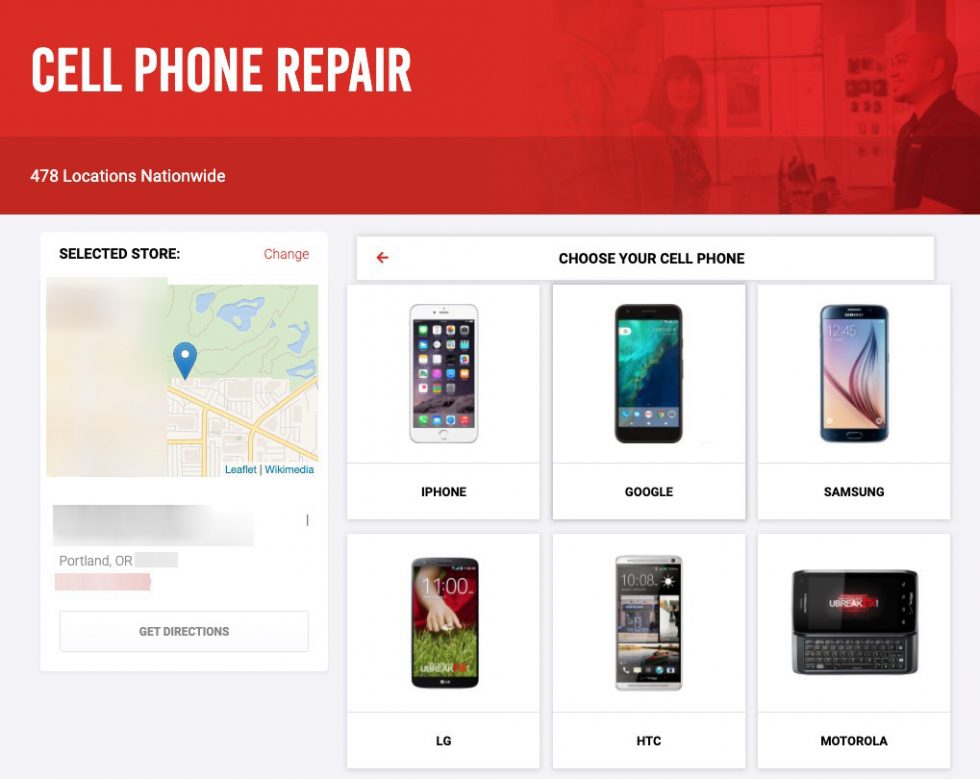 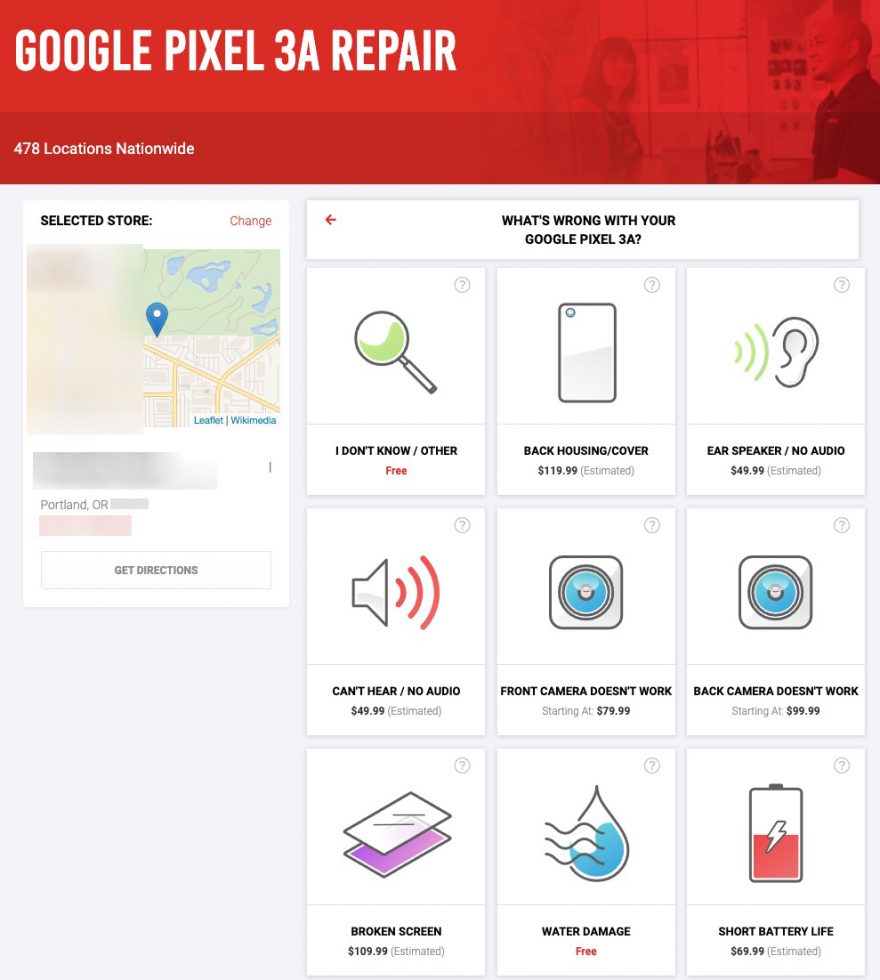 Step 3: Pick your service and schedule a time

If you are good with the price and ready to schedule a repair, uBreakiFix gives you plenty of options. The store near me clearly shows which days they have open and which time slots you can choose to drop off your phone for repair. They typically give you 2-hour windows for drop off. 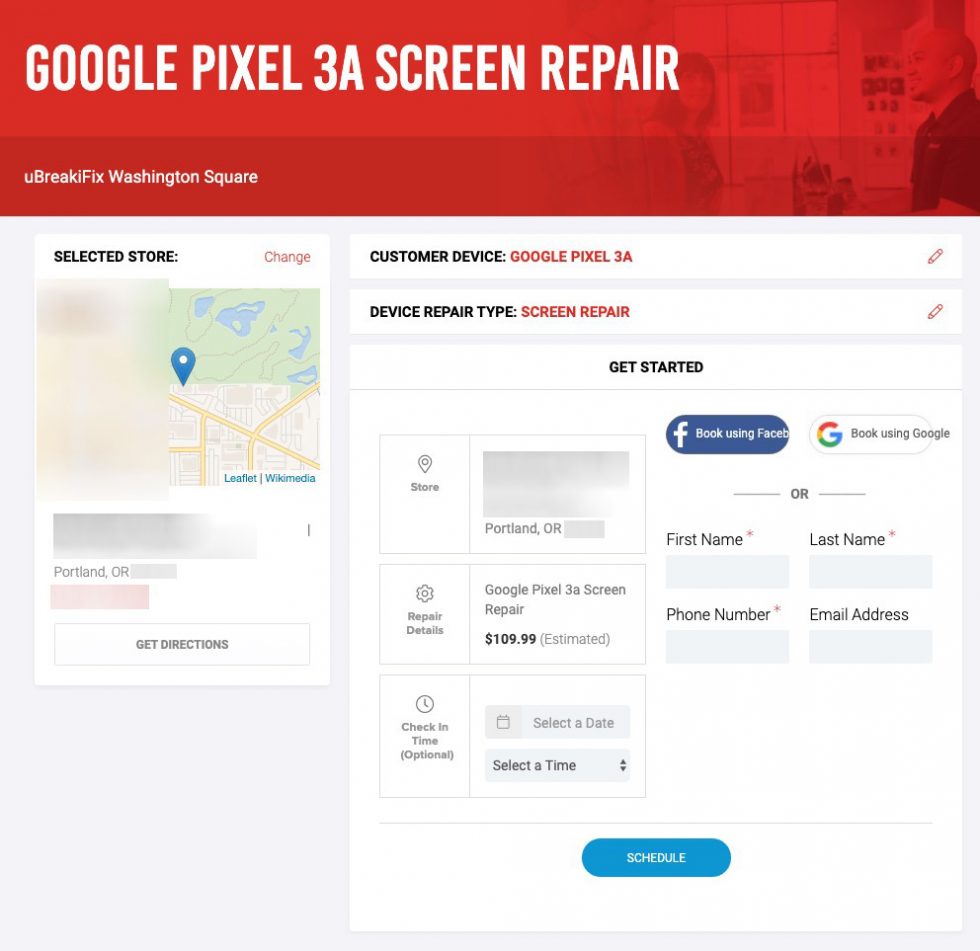 Step 4: Drop off your phone

As your scheduled repair time arrives, dropping off your phone takes only a few minutes. A person will do a couple of quick tests to make sure there aren’t additional problems outside of the service you scheduled. For example, they make check to make sure the display still has touch responsiveness, that your WiFi works, that microphones and cell connections aren’t affected, etc.

If you have a lock on your phone, there are some things to know here. With my Pixel 3a that I dropped off, uBreakiFix didn’t need to know my pattern outside of a quick one-time unlock to check some things (like gathering the IMEI). But for my Galaxy S10e, they needed me to write down my pattern because they apparently needed access to my phone for special testing required by Samsung. If I didn’t give them that password, they said they’d have to factory reset the phone. So depending on your phone, you’ll need to decide how you want to approach that.

Once everything is set, a quick signature is needed on a receipt and then uBreakiFix will give you an estimate for pick-up time.

I had two repairs, as you know, one for a back glass replacement on a Galaxy S10e and another for the front glass of the Pixel 3a. The estimated time for both to be done was close to 3 hours after I dropped them off.

Once your repair is done, you’ll get an email or text. Mine came through exactly 3 hours out, just as they estimated.

When picking up (which I did the following day), the uBreakiFix folks hand over your fixed phones, let you inspect them, and then you pay for the work done if all is well. They’ll probably try to sell you a bunch of cases and other protective accessories while you are going through this final step.

Upon inspection of my phones, I noticed that the Pixel 3a screen replacement had popped up slightly in the bottom right corner, so they immediately took it to the back and put it into a “press” to try and fix it. Since it had already popped up once in 24 hours, they let me know that all repairs are covered for 90 days and that should it pop-up again, I could bring it back in at no cost and they’d potentially consider other ways to get the display to stay down. Should it pop-up after this post goes live, I’ll try to provide an update on how follow-ups go.

The Galaxy S10e looks fine and I had no issues with its repair.

I went ahead and paid for both repairs and had receipts emailed over to me.

Here are the two fixed phones. 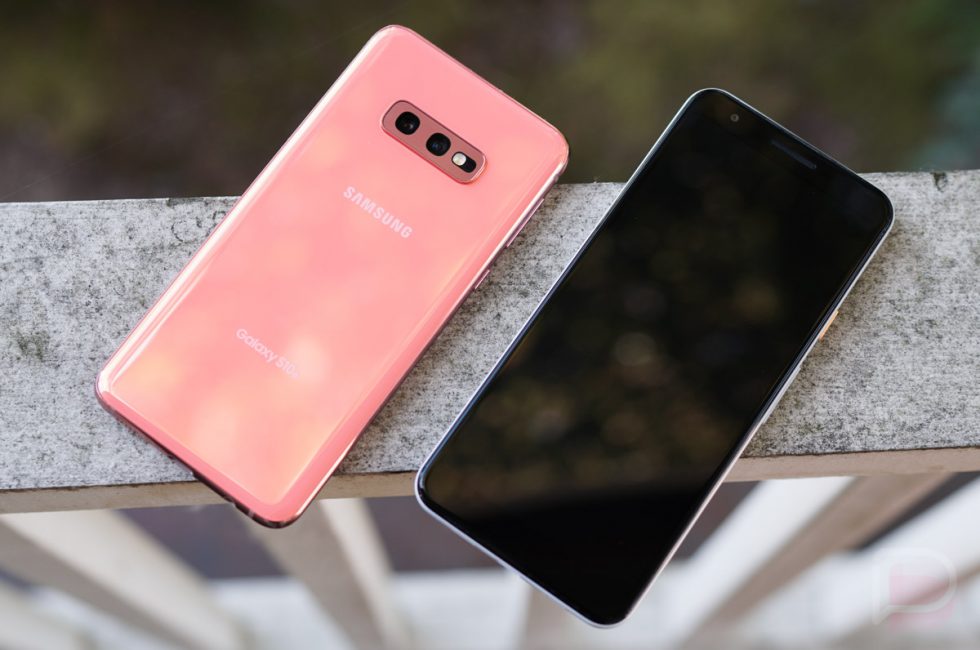 Overall, other than the Pixel 3a screen that I now need to keep an eye on and a price discrepancy that was quickly fixed, working with uBreakiFix is a pretty effortless experience for standard fixes like screen replacements. Like I said in the opening, I’ve used them before and knew what to expect this time, so I didn’t really run into any surprises. The staff has been friendly and easy to work with both times now. They explain their process pretty openly, make booking appointments and picking services super simple, and are a convenient way to get expensive gadgets up and running again without having to fully replace them. But like any other repair situation, keep documents around, inspect finished repairs, and make sure you pay what was quoted.