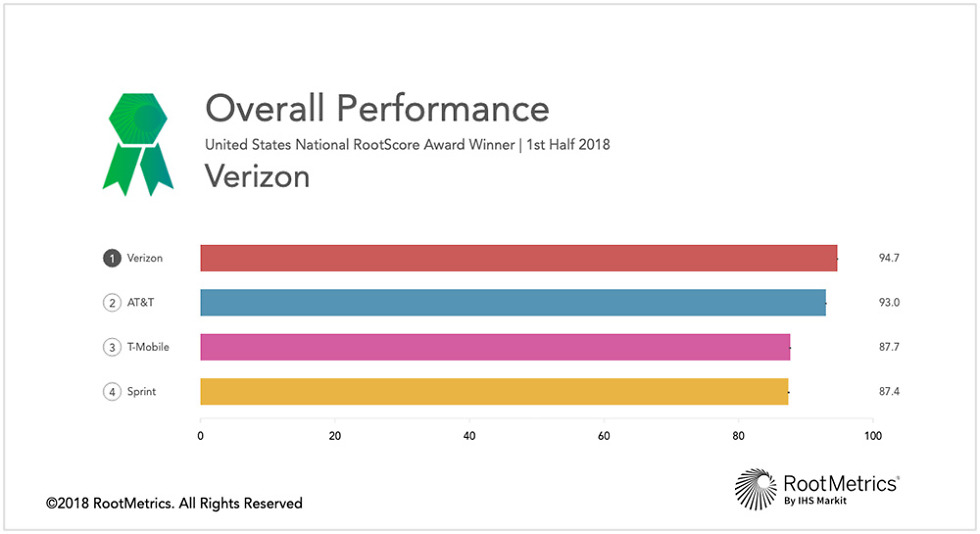 If there is one constant in the world of wireless network reports, it’s Verizon dominating almost all categories in the latest from RootMetrics. It’s tough to say why that is, since Ookla and OpenSignal all show T-Mobile making great strides and beating out Big Red regularly these days, but this latest first half of 2018 report from RootMetrics paints quite a different picture.

RootMetrics once again broke down their first half 2018 report into three categories/areas: nationwide, state, and metro. In all three, Verizon was crowned the champ and it wasn’t really close.

In the nationwide testing, Verizon topped with an overall score of 94.7, but it also won each individual category for reliability, speed, data, calling, and texting. AT&T posted a solid 2nd place finish, while T-Mobile and Sprint were well off in the distance. Again, that’s not at all what the other two big network reports have been showing, though those often care more about speed than the factors that RootMetrics looks at, like reliability. In the nationwide reliability and texting categories, T-Mobile actually came in last, behind Sprint.

On an overall state level, Verizon performed best in 47 states, which translates to winning outright in 32 and tying for the best in 15 others. AT&T came in 2nd with 18 total (2 outright, 16 shared), while T-Mobile and Sprint managed a single tie for the top. Neither won a state outright.

T-Mobile did perform well in the speed category for states, grabbing 7 outright wins and tying in another 10. That was only good for third place behind Verizon and AT&T, but it’s at least something.

In metro areas that were tested, T-Mobile had its best showing. It still came in well behind Verizon’s 602 metro area category wins with 454, but it easily outpaced AT&T (292) and Sprint (114). In the overall category, Verizon won or shared the win in 101 of 125 metro areas, while T-Mobile did the same in 63. T-Mobile did top Verizon in the speed category, though, with 74 combined.

RootMetrics says that they test “from the consumer’s point of view,” with off-the-shelf smartphones that are used day and night, and while walking and driving. They utilize random sampling techniques and try to test while doing activities that consumers typically do from their phones. You can read more about their methodology here.

Why does T-Mobile always seem to be so sh*tty in these scores compared to others? I don’t know! These RootMetrics reports almost always show exactly the reputation that T-Mobile has had for years, which is a network that is solid in cities and not-so-great outside of them. With that in mind, this latest report does show T-Mobile improving significantly in a number of areas from past reports, so it’s not like it’s saying that T-Mobile is a bad choice. It’s just showing that Verizon continues to remain everywhere and is still reliably fast and stable.