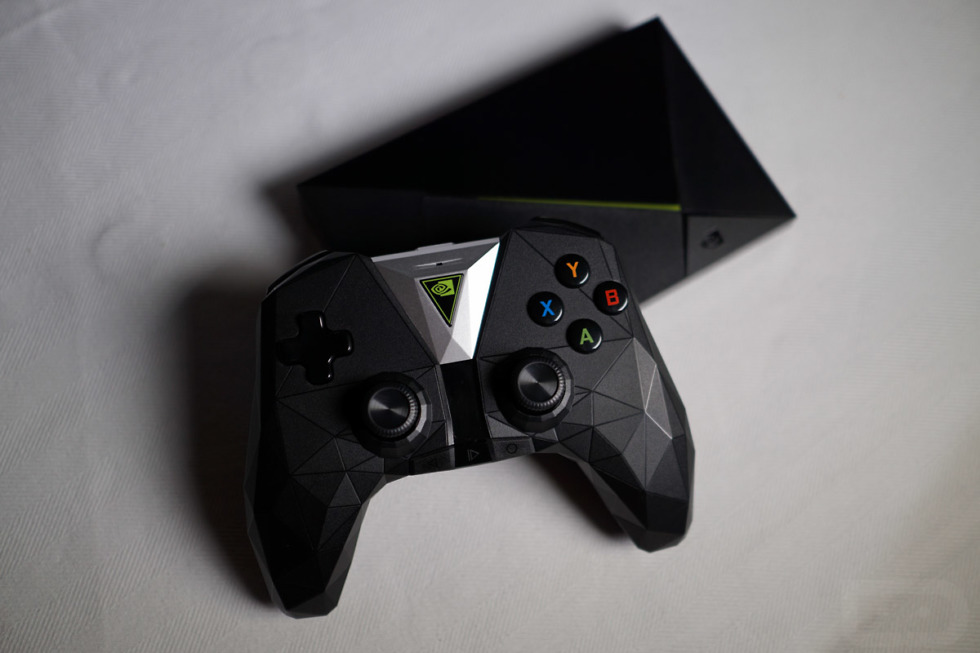 CES has always had many goodies announced for fans of technology in general, but given that I am mostly interested in the Android-focused announcements, the show hasn’t been all that stellar for the past few years. While we do see a few phones announced here and there, as well as plenty of virtual reality stuff, CES isn’t quite what it once was the years we first started attending.

In 2017, we saw a lot of the same, with US availability announcements for phones like the Mate 9 from Huawei, two new Chromebooks from Samsung and Google, plus a gang of other announcements that includes new Android Wear devices from an assortment of brands.

With the following post, I intend on sharing my favorite announcement from this year’s CES and going over the product in full detail. 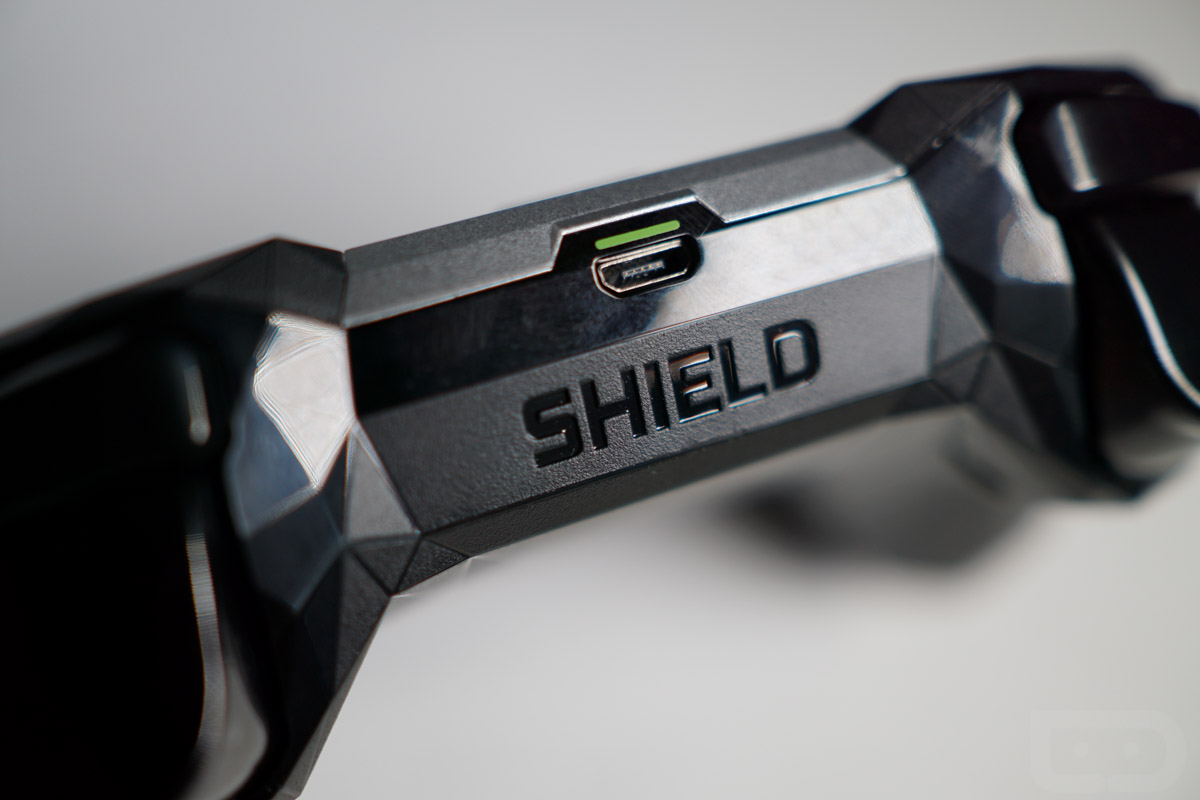 As you may have figured from the title of this post, NVIDIA’s new SHIELD Android TV console is my favorite announcement from CES 2017. In the weeks and days leading up to the show, we discussed publicly our desire for a new Android TV console from NVIDIA, given that both Kellen and I use a SHIELD in our homes on a daily basis. Not only does it offer Google’s Android TV operating system for access to games and apps like Netflix and YouTube, but for me, it offers another library of games for me to play thanks to GeForce NOW. Seriously, we love SHIELD and the fact that the rumors were true and NVIDIA announced a new one had us both pretty excited during NVIDIA’s keynote event.

While the initial feedback I’ve seen on SHIELD (2017) is mixed, allow me to clear up any confusion regarding what NVIDIA is bringing to the table in the new year.

For starters, the new SHIELD is smaller, and also feels quite a bit different from the OG model. While the original SHIELD is bit larger and metallic in appearance (it’s mainly heavy plastic), the new SHIELD is extremely lightweight, plastic, and more compact. This move should help save you some space on your TV stand or wherever else you intend on placing it. Not only is the console itself smaller, but the updated SHIELD Controller is also smaller, about 20% in total, according to one of NVIDIA’s reps that I spoke with. 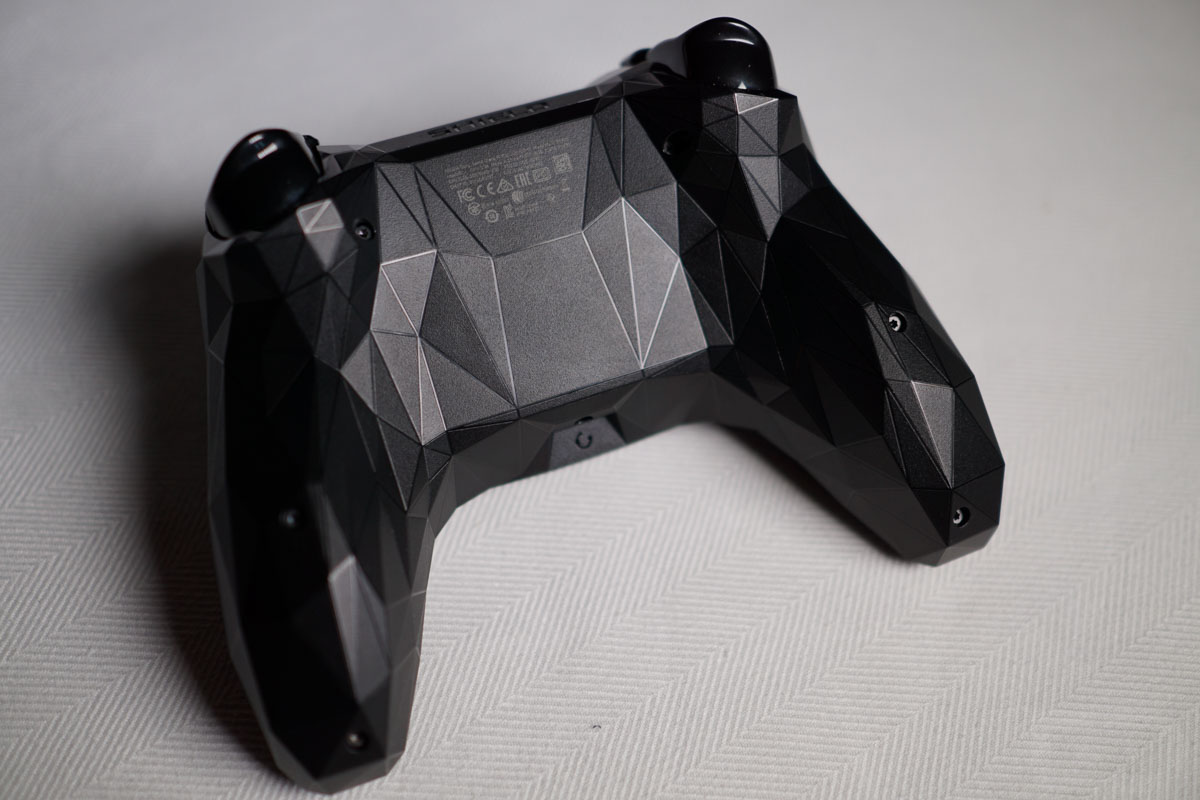 On top of the SHIELD Controller’s new design, having played a bit of Titanfall 2 and messing around with the new SHIELD’s UI, I can confirm that it feels much better as a gaming controller than the original SHIELD Controller. The grip on the updated controller feels much more ergonomic, hopefully leading to more hours of gaming without getting tired hands. For those who think the Controller’s design is pretty funky looking, don’t worry, I agree with you, but it feels great in-hand.

Something also worth noting, while the SHIELD Controller is still charged via microUSB, the SHIELD Remote is no longer charged the same way. Instead of charging the remote via microUSB, it has a replaceable battery. While no one would label that as entirely awesome, NVIDIA claims that a fresh battery in the SHIELD Remote can last up to a year of usage. But still, an old school battery? Odd move from NVIDIA.

Back to the console’s innards, a few minor changes have been made, including one that left me a little disappointed in NVIDIA’s decision making, as well as one that may leave potential buyers disappointed. Inside, buyers will find the same Tegra X1 chip that is in the original, as well as 3GB RAM, but in NVIDIA’s testing, the set-top box will still outperform its competition quite easily (3x the performance). Is it an awesome move to present the same processor in this new hardware as the company did in the original? Not really, no, but NVIDIA doesn’t exactly have a new chip to toss in there. If NVIDIA did have updated silicon to slap inside of updated SHIELD hardware, they likely would have, but we may have also seen an increase in price. It’s sort of a take and give situation. With that said, though, performance should not be an issue when you go to stream your 1080p video games at 60fps. Everything should be smooth and sexy, at least from what we experienced during our time with the product demo. For a full list of specifications for the 16GB model and PRO model, check here.

The storage is where NVIDIA changes things up from the original, deciding to strip the base 16GB model of a SD card slot, something that I don’t agree with. In what will likely be labeled as a way to keep the sizing down, only the PRO model of SHIELD (500GB) will come with a SD card slot, but that seems very unhelpful to those who possibly can’t afford the PRO. If users can only obtain a 16GB model, a SD card would have been helpful, but NVIDIA also clarifies that the use of a USB 3.0 storage device is still an option in case expandable storage is necessary for the user.

The updated SHIELD will launch with Android 7.0 “Nougat,” which also includes a sweet new app switching UI. For current SHIELD owners, don’t worry, NVIDIA made it quite clear that most of the new features that were announced will also hit older consoles in the future. To be clear, NVIDIA will not be leaving you behind. 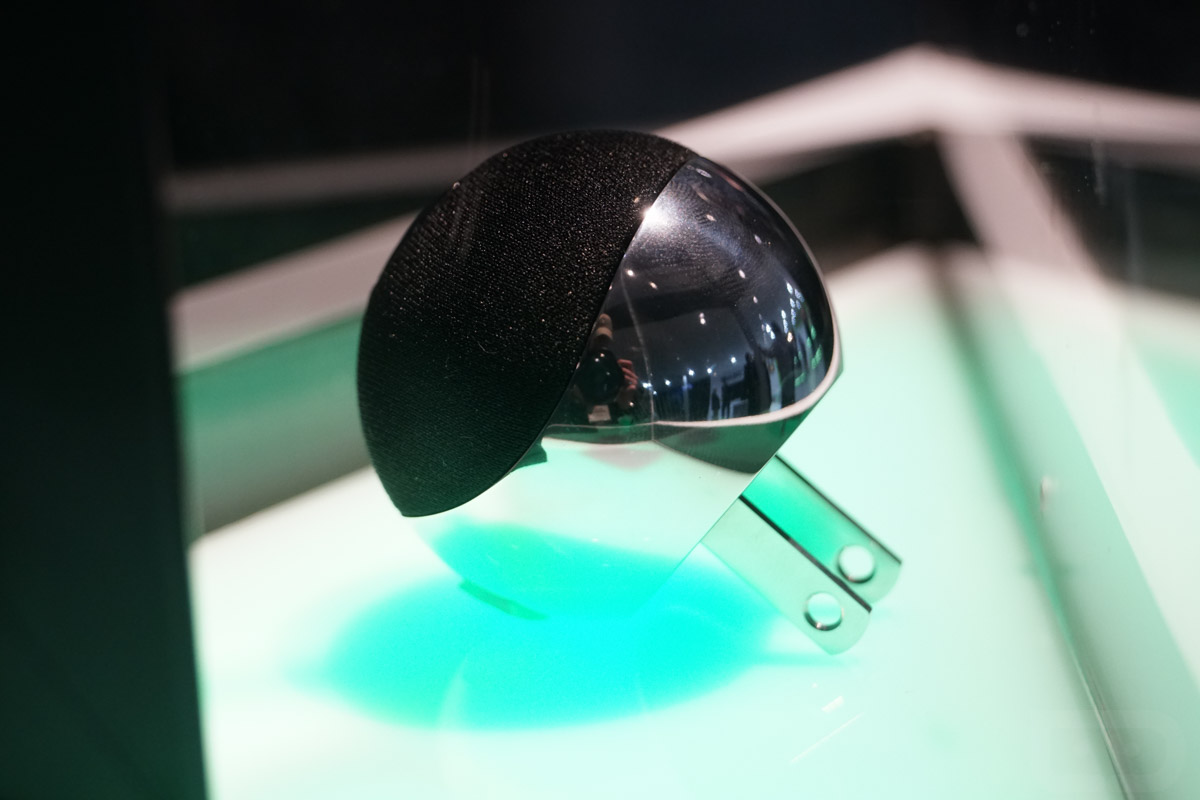 Another major change for the new SHIELD TV is future access to Google Assistant, the first time Google’s digital assistant will be brought to your living room’s television. With Assistant built-in, users can speak to either their SHIELD Remote or SHIELD Controller very naturally, asking for TV shows or movies to be found, accessing weather, or seeing photos from a previous trip you have taken.

Thanks to the controller and remote having the ability to always listen, you won’t need to specifically press any buttons for Assistant to be prompted. You will simply speak the “Ok Google” hot word. Not only that, but even a feature not yet available for Google Home was showcased, which is the ability to have a natural conversation with Assistant. Instead of constantly speaking the hotword, you simply state any followup remarks/questions after Assistant delivers the initial results. For example, if you ask about new movies, you can followup with “only new ones,” or “only comedy.” No more “Ok Google” for each inquiry.

For those worried about privacy surrounding the microphones always listening, that feature can be disabled from within the Settings menu, meaning the remote or controller aren’t always listening for you to speak the hot word.

Sadly, Assistant and the aforementioned features won’t be available at launch of the new SHIELD, since Google has not yet made it public for Android TV. During our demo, we only used a beta build of the software. We don’t know when the feature will come, but it should be awesome.

To go along with the new SHIELD and all of this Google Assistant functionality, NVIDIA announced the NVIDIA SPOT. With these little mic+speaker balls that plug directly into your wall’s power outlet, you can access Google Assistant from any room they are placed, with SHIELD TV handling the computing workload.

Thanks to SmartThings integration via yet-to-be-launched dongle, SHIELD becomes a hub for all of your home’s smart stuff. For example, if you have Hue lights throughout the house, plus a few SPOTs, users can say, “Ok Google, turn off the bedroom lights,” with the action then going from your bedroom’s SPOT to your SHIELD, then dispatched to the room’s Hue lightbulbs via WiFi. While the process may sound complex, it’s relatively easy to setup and manage.

In addition, should you have more SPOTs in the house, they become smarter with the ability to triangulate a user’s position. If the SHIELD can pinpoint where you are, it can become more aware, allowing you to speak less of a command. As an example, instead of asking for the Hue lights to be turned off in a particular room, SHIELD will recognize where you are, thanks to the triangulated position, then turn off the lights in just the room you are currently in. SPOT will also utilize the volume of your voice to recognize where in the house you are. So, instead of, “turn off bedroom lights,” it’s just, “turn off the lights.” Pretty sweet, right? 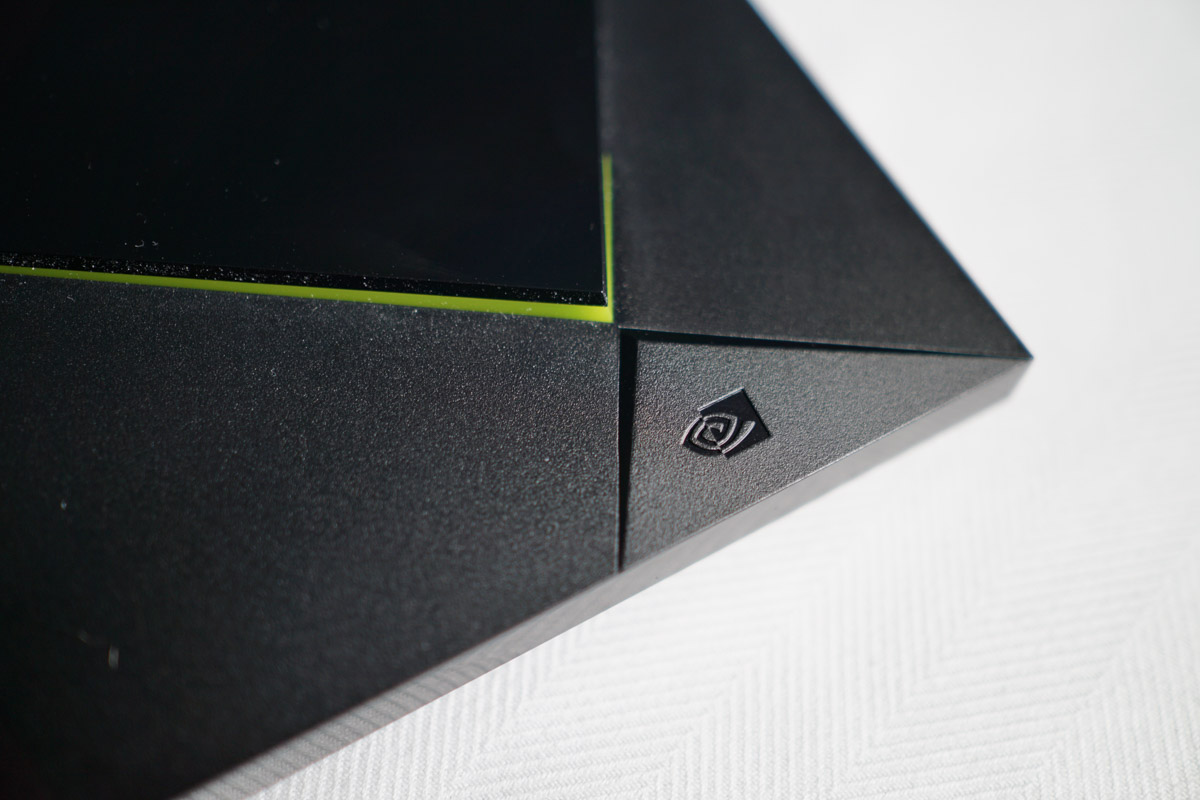 The 16GB base model of SHIELD is priced at $199, but as a bonus, the SHIELD Remote is no longer an accessory and will be thrown in with the purchase of SHIELD TV. In the box, you will get SHIELD, a SHIELD Controller, plus a SHIELD Remote. The remote used to be a $50 add-on, so that’s a major bonus. For the PRO, the price is $299. It also comes with the same SHIELD Controller and SHIELD Remote, but also has the 500GB of built-in storage and SD slot. Essentially, it can be run as your ultimate gaming console and media server.

Unlike companies that announce products and then hold off on launch, the new SHIELD TV is available for pre-order right now at a number of retailers with launch set for January 16. You can find it at Amazon, Newegg, and on NVIDIA’s website. The SPOT, however, is not yet ready for purchase and will be made available later this year for $50. Does that suck? Absolutely, but hey, it’s coming.

If you have any questions regarding SHIELD, the controller, or anything else, I can do my best to answer them for you in the comments below. Until then, there you have it, my favorite product announcement from CES 2017.