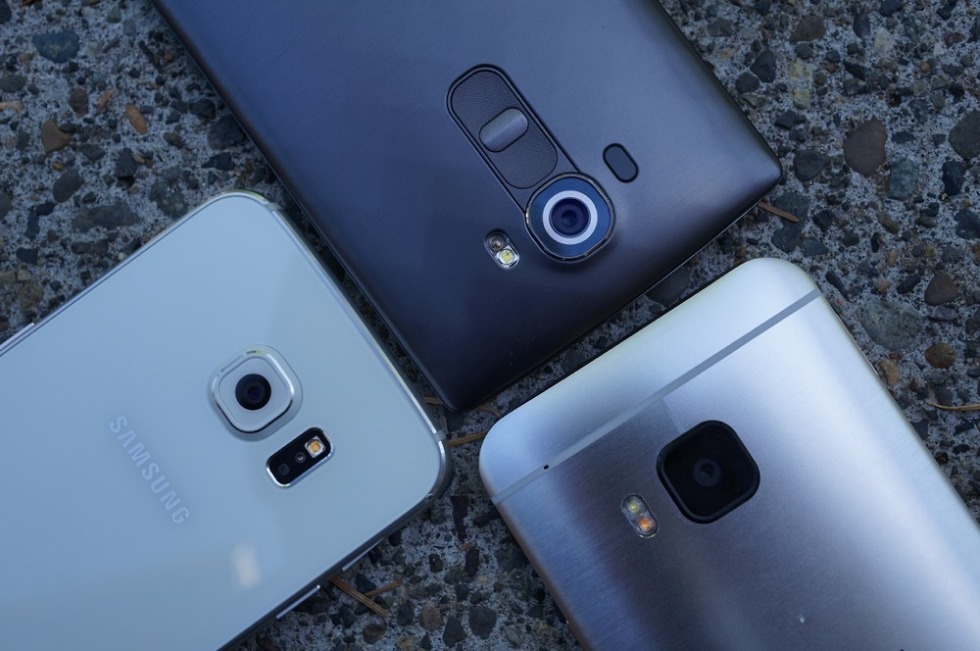 After we posted up the camera samples from the LG G4 a few days ago, I began working on a comparison post between the LG G4, Samsung Galaxy S6, and HTC One M9. It is quite likely that someone who is to be soon shopping for a new smartphone will be deciding between one of these three phones, so we took them out into the field, and tested out their cameras.

Thankfully, I am no stranger to any of these phones, so I kind of already knew what I was in store for when I began this comparison. We have detailed in our Galaxy S6 and S6 Edge reviews that these two phones feature the camera to beat, as in almost any situation, it is capable of delivering good shots with its 16MP rear-facing shooter with f/1.9 lens and OIS. On the other side of the spectrum is the One M9, featuring a 20MP sensor and no OIS, which struggles to produce a decent shot in almost any setting. The LG G4 is the newcomer, with a 16MP rear-facing camera with f/1.8 lens, featuring laser auto focus, phase detection, and optical image stabilization. LG touts the G4 as featuring one of the best cameras ever put in a smartphone to date, and frankly, they are not far off.

After peeking at the results, there are no true surprises. The G4 and Galaxy S6 basically leave the One M9 in the dust, which is a pretty big downer for HTC. You had one job this year, HTC – fix the camera! To my eye, the One M9 is incapable of snapping many shots in a row that don’t feature mass amounts of noise or bring in way too much light. From what I see, the One M9 shines in broad landscape shots, but struggles with close up macros, low-lit environments, and anything with a moving subject.

Moving on from the mostly disappointing One M9, the G4 and Galaxy S6 are quite comparable. Both devices capture crisp and well-lit shots, all of which you would be proud to share on your social networks. But for me, each has a category or two where they shine exceptionally well. For the Galaxy S6, these categories would be macro, landscape, natural-looking flash photography, and real-time HDR. In my opinion, given the perfect settings for each device, the G4 would only beat the Galaxy S6 at night time and in low-lit environments. With that being said, the LG G4 blows my mind with its ability to take detailed shots in low light, as you can see in this photo here.

If I absolutely had to rank from best to worst, which in my mind is completely subjective, I would say Galaxy S6 (best), LG G4 (2nd best), One M9 (absolute worst). Keep in mind, the Galaxy S6, G4, and One M9 offer Pro and Manual modes, allowing more photo-savvy users the ability to tweak ISO, White Balance, Exposure levels, and even shutter speed (G4). With these added settings, a true photographer could make any of these phones work for them, so it’s up to the device owner to really make these phones work to their full potential.

Please note, most of the photos below won’t receive awards in the field of photography, but are produced merely to give potential buyers an idea of what they can expect from their devices. I’m an average guy, taking average photos. In addition, most photos with the exception of two shots, were taken without using HDR. Since the mass majority of folks who utilize their smartphone’s camera may not dive deep into Manual Modes and Pro Modes, we were looking for more of a fair comparison basis for all devices. For example, if you quickly pull out your phone looking to snap a shot, this is what you can expect. If you have five minutes to tweak with settings, you can undoubtedly produce something better with each of these phones. But for the sake of comparison, each phone was left on Auto during the majority of this testing.

Shoot all questions below and I can attempt to field them.