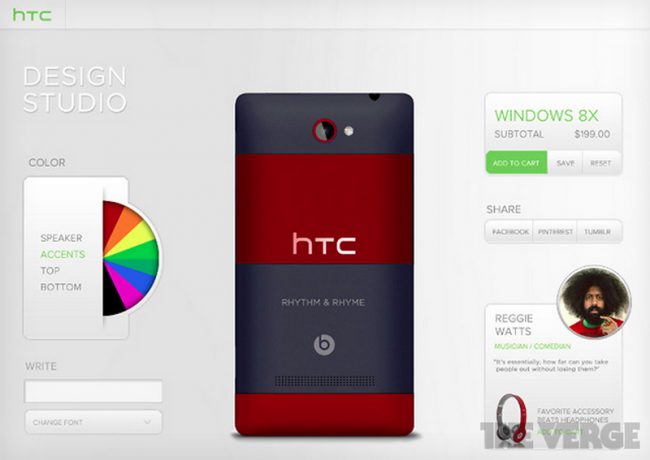 There are lots of arguing points when you bring up the Moto X, but the general consensus from the industry is that MotoMaker is pretty awesome. Even if it’s only available for AT&T customers at the beginning, the ability to customize your device just to your liking is something the mobile device industry has wanted for a long time. Today’s news however shows that Motorola wasn’t the first one to try it out, HTC almost beat them to the punch.

The team over at The Verge got some information from unnamed sources today that HTC and Sprint were gearing up for a web app called the “HTC Design Studio” that basically let you do everything that MotoMaker does. Pictured above is the Studio that was based around the HTC 8XT Windows Phone. Changing main and accent colors as well as matching it with Beats Headphones looks to all have been available. Even personal engravings were optional as well. All of these features you can find on today’s MotoMaker.

Unfortunately for HTC, they couldn’t find a way to streamline the process to keep the costs down. Sprint and HTC cancelled the project and the 8XT launched without this customization option. Motorola’s plant in Texas might have been the key to keeping this up and running at a decent cost.

Do you think this would have helped HTC if they could have launched it before Motorola?