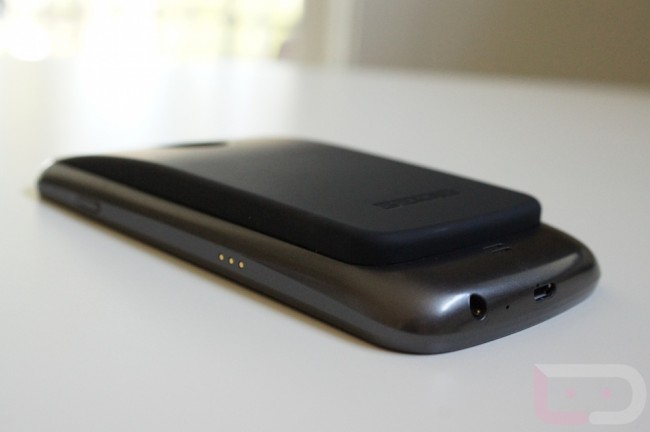 No that is not a military vehicle on your screen, that is the Samsung Galaxy Nexus with a Seidio 3800mAh extended battery attached to it. It might look like a tank, but it will certainly power your phone through a full day thanks to more than double the juice of a standard G-Nex battery which weighs in at 1850mAh. I picked one of these up (the NFC version of course), to see how big it really was in person, but also to give one away since they pack a $75 price tag. Before we reward one of our amazing DL community members though, let us talk about it for a moment so that others can decide if their pocket can handle one.

So how big is it? In the comparison shots below, you can see that the thickness matches up almost perfectly to a G-Nex extended (2100mAh) and standard battery stacked on top of each other. It’s thick, people. It adds a decent amount of weight, meaning you will notice a difference. It also has a purely black cover which of course does not match up to the coloring of the actual phone. So not only does this beast stick out a half an inch or so off the back of the device, but it stands out in looks as well.

What about a single life charge? I’m not going to lie, slapping this on the back of my phone would be the equivalent to someone scratching fingernails across a chalk board. I’m a minimal phone elitist, meaning I love my phones thin and sleek and without massive, non-matching humps on the back. Basically I’m saying that I have not fully tested this battery, however, at 3800mAh this thing includes more power than the 3300mAh battery tucked into the DROID RAZR MAXX which can last you anywhere from 2 to 3 days. This battery should easily hit numbers like that. The big thing here is that this battery is not slender like the RAZR MAXX’s. If you are interested, you have to ask yourself if the added weight, thickness, and black non-matching back are worth it to you. For some, the answer is a definitive, “Yes.”

Other notes? The new back plate has a soft, almost matte black finish and feels a lot like the new Ringke SLIM case that I reviewed last week. It doesn’t feel that bad in hand and is essentially slip resistant. This version of Seidio’s battery is also the NFC-capable one, so you won’t miss out on any Google Wallet opportunities with this attached. 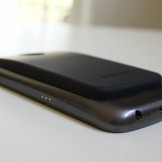 Since I sit at a desk all day long blogging away with a chargers are arm’s reach, a beastly battery like this is not necessarily topping my list of must-have accessory. So we thought we would save one of you $75 and give it away. Sound like a plan?

1.  Follow us on Twitter if you aren’t already.
2.  In the comments, tell us how badly you need this extended battery.
3.  Tomorrow at 9AM, we will choose a winner from the comments.

Update:  Our winner has been picked!  HuskerDroid10 was randomly chosen and will take home the NFC capable, 3800mAh Seidio battery for the Galaxy Nexus. He hopes that this tank will get him through sporting events, something his current battery cannot do.