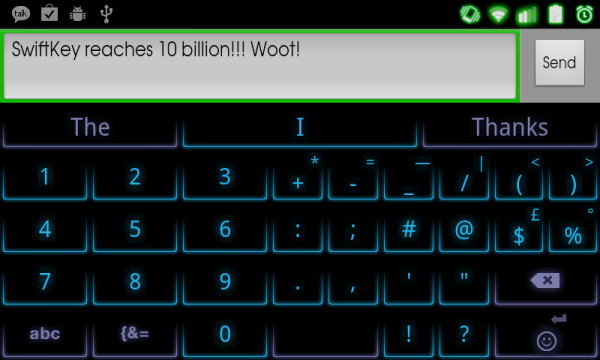 We have plenty of people here who love them some SwiftKey. It is one of the top alternative keyboard choices for Android alongside Swype and FlextT9. SwiftKey has just announced that they have saved users a combined 10 billion keystrokes thanks to their word-predicting engine. And to celebrate, are giving away tablets, launches of trial applications, and support for six new languages.

If you want to get in on the fun, and happen to be a SwiftKey user, then follow these easy instructions to enter yourself in to win a Vizio tablet.

To enter the drawing, SwiftKey users are being asked to tweet how many keystrokes they have saved – a stat available in their app’s settings – along with the hashtag #SKX10bn. And for Android users yet to try SwiftKey, the company has just launched two new free trial apps, so users can give the award-winning technology a shot and then submit their tweet. One winner will then be randomly chosen and contacted via direct message at the end of each day.

If you choose to enter, then good luck to you. I would love for people to put down in the comment section how many keystrokes they have saved. Are Droid Life readers anywhere near at least a billion?