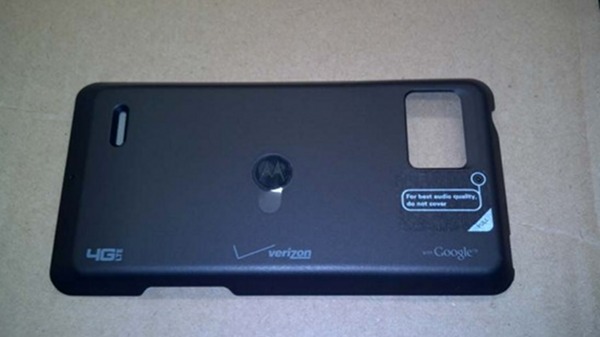 So we’ve finally had some time to really dig through the FCC filing of the DROID Bionic that went live today and just wanted to point some things out.  First, is the inductive battery charging which we talked about on Friday when we first saw under the hood of this beast.  There were prongs beneath the battery cover that led us to believe we would have wireless charging, and we are getting pictures of the cover today.  While it looks to add some thickness (as all inductive covers do), it also looks like it will even out the hump – leaving you with a perfectly flat back to the phone.  Got to love that.

Next, we took a deeper look at the user manual and found some confirmations on things like the screen (4.3″) and also the fact that it .   (SEE UPDATE BELOW), you can tack on another plus to the DROID Bionic.  Dual-core, 4G LTE and a?  Sign me up.

Here is a look at the top and bottom of the phone.  Not too thick and not too thin.  We get a solid view of that bottom sloping chin that sort of matches the DROID3.  We’re definitely hoping that the lock switch has moved on the final version though.  Top left would not be the easiest thing to hit for those of us that talk with our right hands:

We should also point out that the manual appears to be a bunch of filler pulled from previous devices, so by no means is all of this official.  The screen and global capabilities more than likely are, but the version of Blur you are seeing and some of the other OS details could differ when this phone is finally released on September 8 (rumor).  Also, we’re pulling for a September 1 pre-order to go live – would certainly make sense if the device was going to hit stores on the 8th.

Update:  It’s definitely looking like this WON’T be a global device after all.  The filing itself makes no mention of the device having GSM radios in it.  Like we said above, this manual was patched together from a variety of devices and should not be taken as gospel.  The actual tests performed on the device should be and they say LTE/CDMA/Bluetooth/WiFi:

The Bionic, unlike the HTC Thunderbolt, will NOT be able to do 3G voice and data simultaneously either:

And if you want to see some much prettier shots, be sure to check out our two exclusive galleries from last week:  here and here.

Cheers to Gustafson for the global and simultaneous data finds!