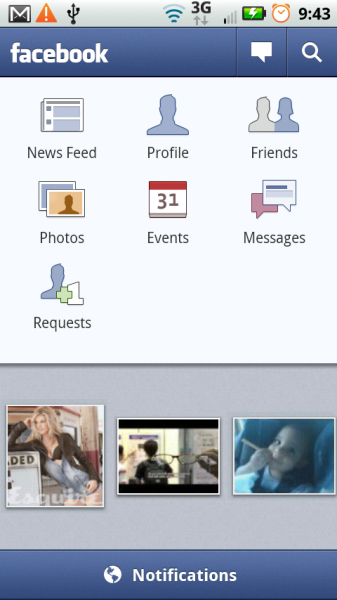 Many of you have been expressing some frustrations over battery life throughout the last couple of days after manually updating to Android 2.2 on your Droid.  Some even claimed that this could be one of the reasons for a rumored halt of the OTA update from Verizon, but with some news discovered today from Geek For Me, it could be something else that we all overlooked and may not be Froyo after all.

Remember that Facebook overhaul that happened on the exact same day that you all updated?  Yep, the one which took FB on Android into the land of the pretties?  It appears as if this may be the culprit behind our battery woes.

Apparently the new update includes a “partial wake lock” which means that your phone looks to be snoozing peacefully when you aren’t using it, but is in fact continuing to run in the background all while hammering away on your battery.  There really isn’t a fix until the Facebook team patches the app, so for now your options are to logout of it or attempt to downgrade back to V1.2.

Update:  Facebook has acknowledged the issue and is working on a fix…(via Android Central)

Hi folks, a number of you have commented on seeing a battery drain on your device since installing the new Facebook for Android app. We have identified the bug that is causing this battery drain and are working on a fix now. As soon as the patch is ready, we will push out an update. Thanks for the quick feedback and for your patience as we get this fixed

Source:  Geek For Me