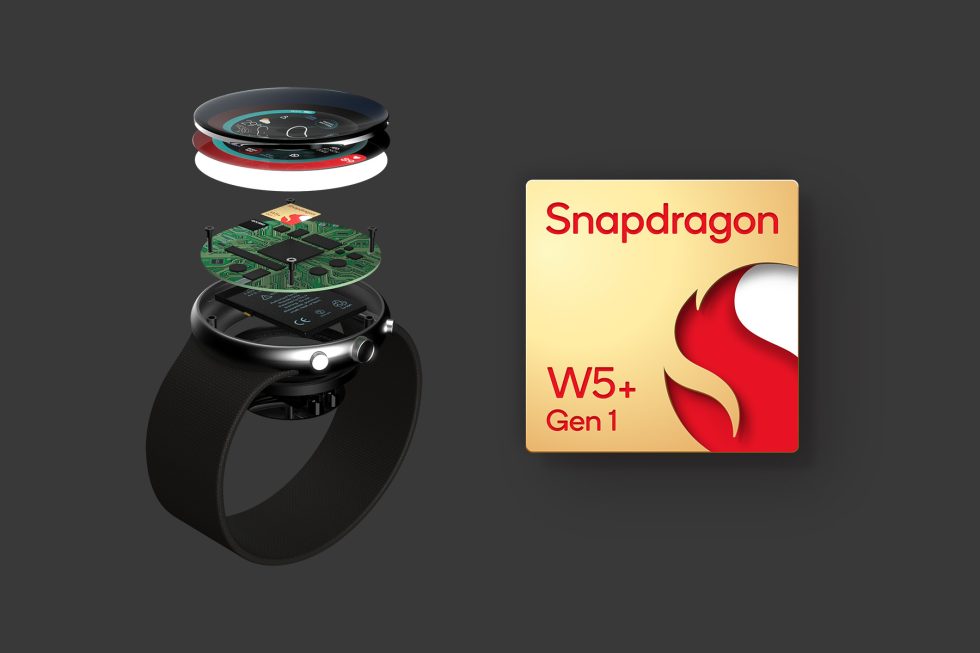 Every two years, Qualcomm introduces a new (or should I say “new”) wearable chipset that will power a new range of smartwatches, many of which run Wear OS. During the days of the Snapdragon Wear 2100 and 3100 chips, I think it’s safe to say that Wear OS practically died, as neither could meet the moment or needs of modern wearables, even back in 2016. We then got the Wear 4100/4100+ line in 2020, but the timing mostly led to smartwatch makers passing on adopting it.

Today, Qualcomm is announcing its newest chip that they expect will actually lead the next wave of smartwatches, not only because it’s new, but because this is their “most advanced leap yet” in the space. Please, folks, welcome in the Snapdragon W5 and W5+ Gen 1, two chips that arrive with some pretty bold claims.

Both the W5+ and W5 are high-end processors that you will seen in Wear OS watches in the near future, but there is one notable difference here.  The W5+ is the higher-end of the two because it includes a new co-processor for handling lighter loads. It’ll likely do the majority of the non-intensive tasks throughout a day, plus it’ll be able to run RTOS alongside (or on top?) of Wear OS, in a new twist on the future of smartwatches.

With that in mind, here’s what you need to know about the Snapdragon W5+. 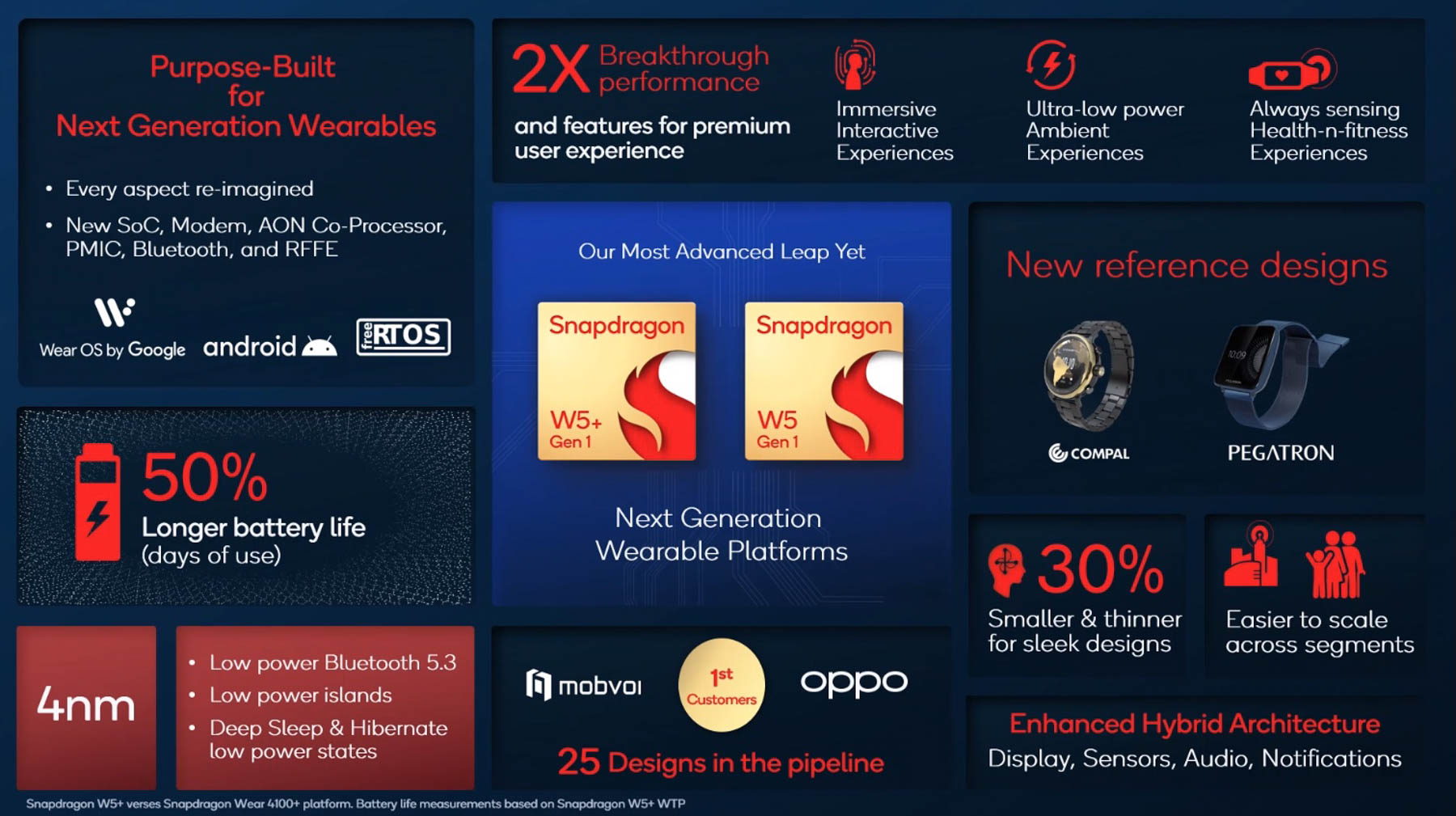 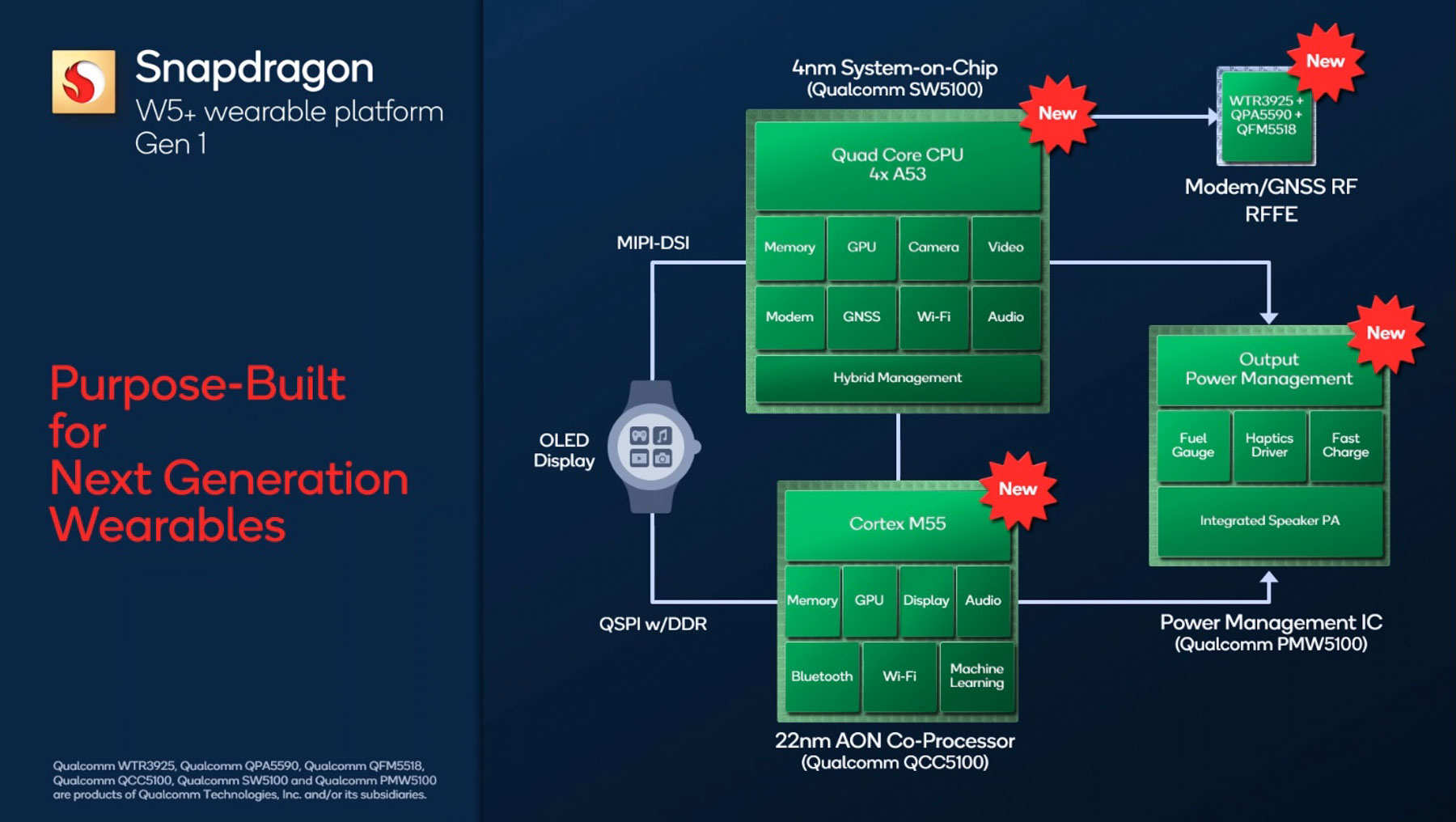 The Snapdragon W5+ is built on 4nm process with a quad-core CPU (A53) that is paired with a new 22nm co-processor. That combination, in large part because of all of the tasks that new co-processor can handle, leads to big claims of 50% longer battery life. Now, overall, Qualcomm is saying a 50% longer battery life over a watch running a Wear 4100+ chip, but below, you can see the breakdown depending on tasks. There are big leaps in things like display scrolling, streaming music over Bluetooth, and in the always-on display.

For a smaller, fashion-forward watch with a 300mAh battery, Qualcomm expects you to get 15+ hours of extra use. For a 450mAh watch, they believe you’ll get at least 18+ hours, along with 24+ extra hours on a big sports watch with a 600mAh battery. If these numbers are accurate, a Qualcomm W5+ watch could really see 2-3 days of battery life. 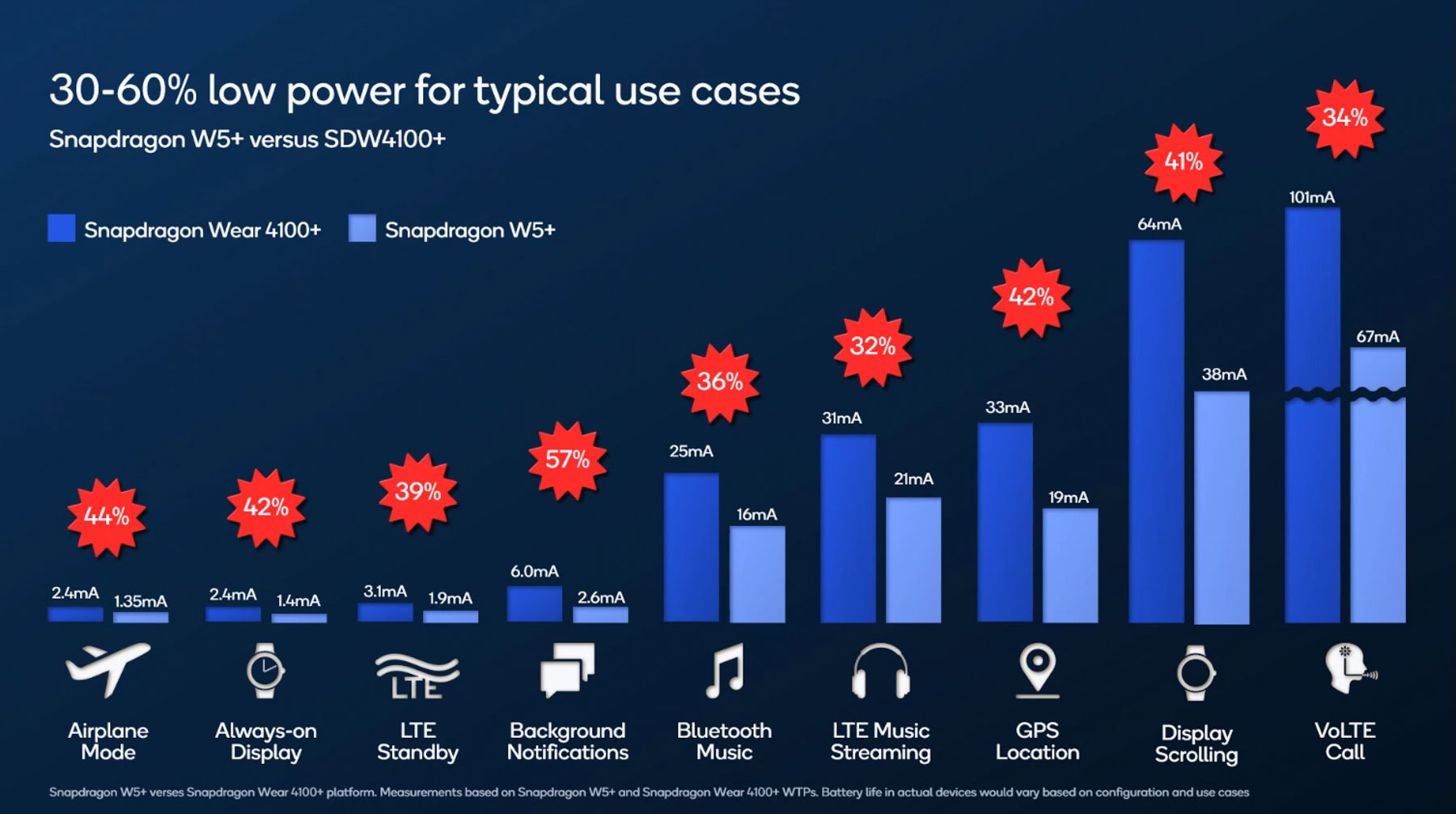 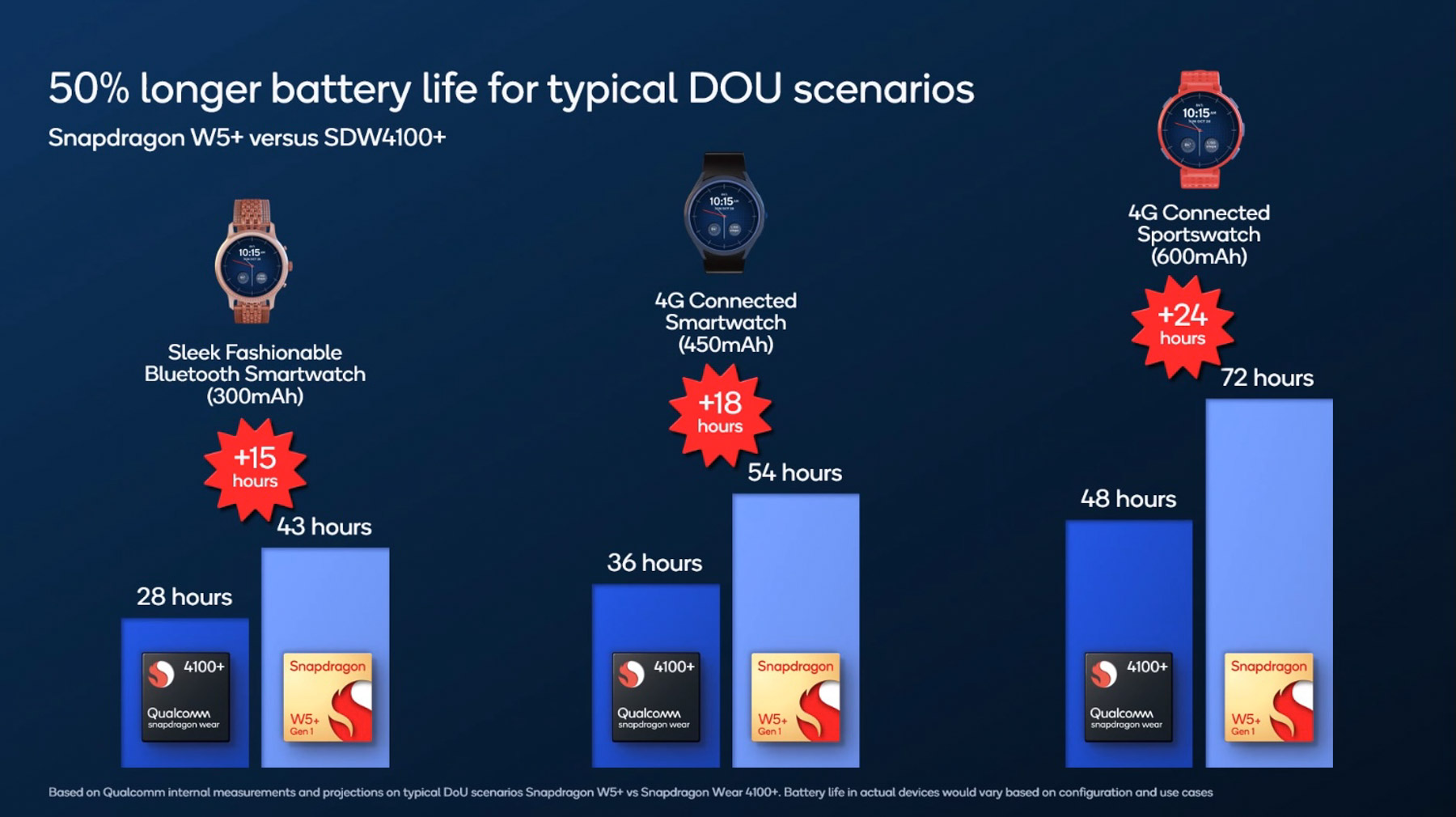 Since battery life isn’t everything, Qualcomm is also stating that watches with the W5+ will see 2x performance, 2x “richer” sets of features, and a chip size allowing for 30% smaller overall watch designs. It supports Bluetooth 5.3 (yep, that’s new!), faster LPDDR4 RAM, has a more powerful GPU, an integrated speaker for the first time, and upgrades basically everywhere else. There’s even a new U55 Machine Learning Core that will help take care of all of the smart sensing stuff, like activity recognition, heartrate and sleep tracking, ECG, SpO2, etc. 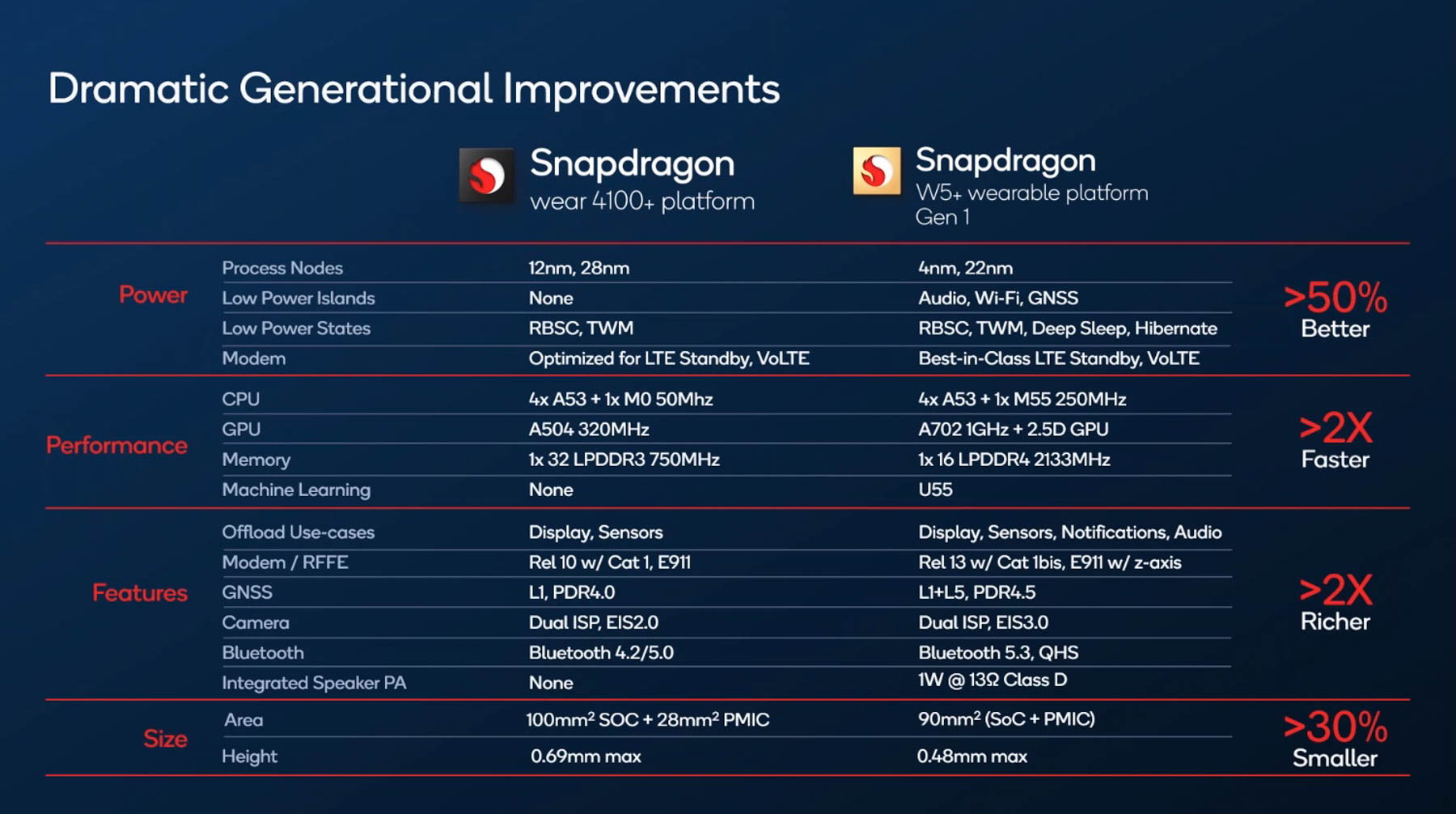 In a bit of weirdness, Qualcomm pointed out that the W5+ and its co-processor will allow for RTOS to run (somehow) alongside Wear OS. RTOS (or “real time operating system”), for those not familiar, is the type of OS we see on “smart” watches that often have a health focus and minimal amounts of smartness. Think about devices like the OnePlus Watch or those made by Amazfit and Xiaomi.

When asked how RTOS and Wear OS will work together, Qualcomm seemed to acknowledge that Google was cool with this pairing, but they didn’t really identify examples of how this might work. My guess is that a company like Mobvoi will use RTOS on something like a TicWatch Pro 4 that could have their dual display setup. You’d have Wear OS powering almost everything, but then when the watch switches to the secondary e-paper display, RTOS would takeover to offer more information. That make sense?

Speaking of Mobvoi, Qualcomm announced today that Mobvoi will be one of the first to use the Snapdragon W5+ in an upcoming watch that will launch this fall. OPPO will also launch a watch running the Snapdragon W5. If neither of those companies excites you, Qualcomm said that there are 25 customer designs in the pipeline, so expect even more.