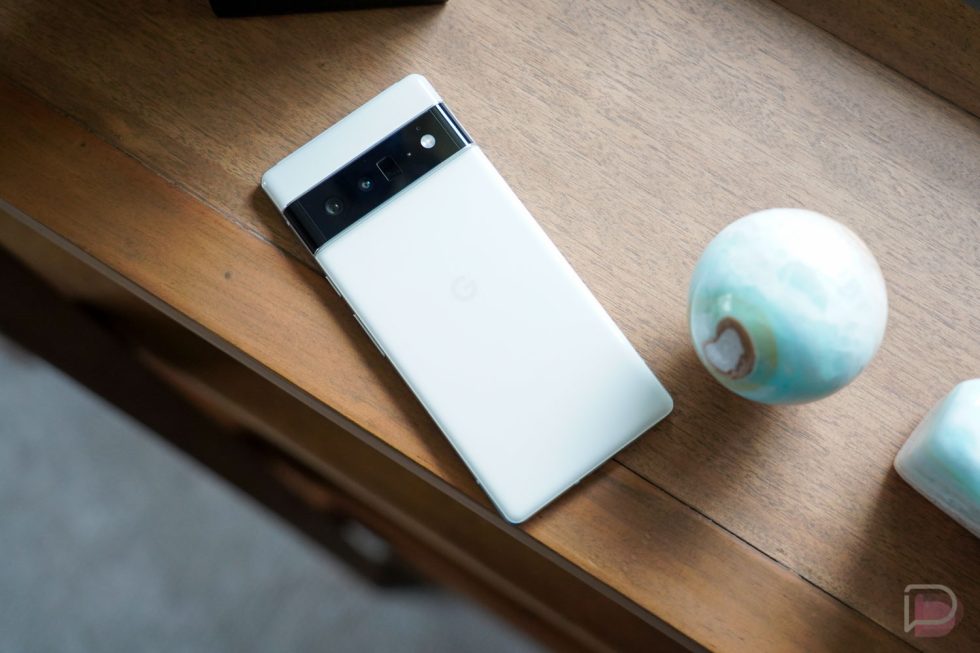 That title is probably not what you think it is. While it is correct in suggesting I couldn’t make it 30 days using Google’s Pixel 6 Pro, it’s not because the phone has provided an awful experience that would turn most people away. Instead, I couldn’t use the Pixel 6 Pro for 30 days because Google released another phone that’s more my style, the Pixel 6. The Pixel 6 has won me over and the benefits included in the Pixel 6 Pro over the regular version were just not enough to keep me around.

Pixel 6 Pro, still great for most

I think the takeaway from my initial review of the Pixel 6 Pro was really that Google made a very nice flagship-level phone, the best they had created in a really long time. They went for it in almost all departments and delivered quite a fun experience at a price well south of the competition. The Pixel 6 Pro, from the minute it dropped, became an impossible phone to ignore and likely one that most people should have had at or close to the top of their short list of potential new phones.

And I still firmly believe all of that! But that’s what I believe when suggesting a phone for other people. As I mentioned above, the Pixel 6 Pro just isn’t a phone for me. The Pixel 6 offers a better fit, even if I still have gripes there too.

Unfortunately, if you came to this post hoping for an update on the Pixel 6 Pro after a month or so of use, with new info on battery life or performance or the camera, I do not have that. As much as it is my job to test devices and then relay that info back, I’m a human and can only put up with something I don’t like for so long. Instead, here’s what the last 30 days have been like as I’ve tried to find a phone for me. 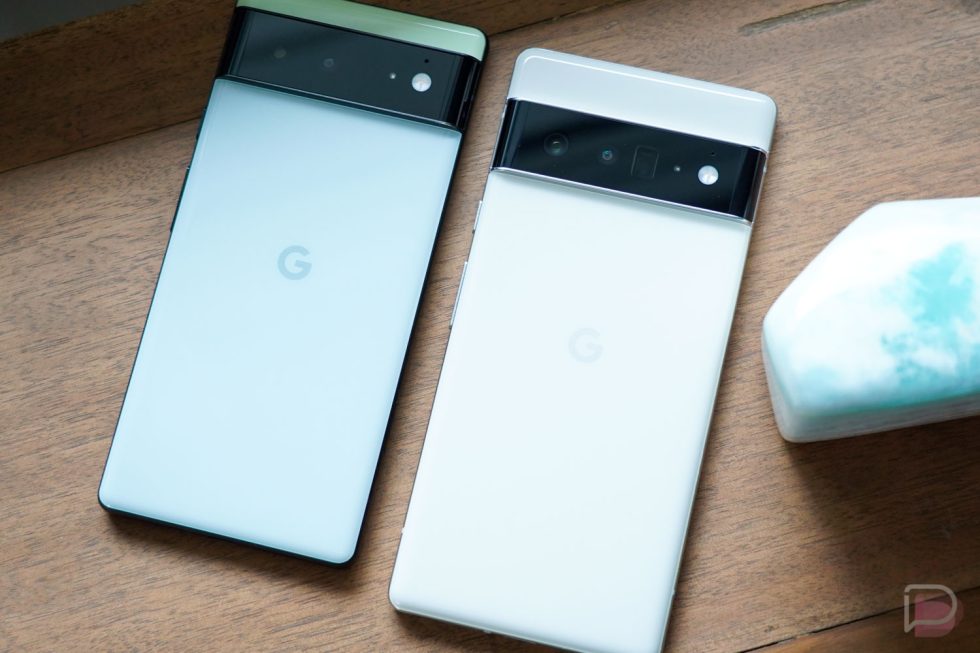 What you lose with the Pixel 6

The minute I wrapped my Pixel 6 Pro review, I reached for my Seafoam Pixel 6 that I had purchased during the pre-order period, but was waiting to use. I fired it up, set it up, and immediately started to get a feel for the differences between its $599 value and what you get for $899 in the 6 Pro.

I should also probably point out that I had a Pixel 6 Pro in Cloudy White on pre-order, but it was already a week+ late at this point, thanks to the lovely delivery service known as Ontrac. We’ll come back to that situation in a minute.

The first things you notice between the 6 and 6 Pro are the size, the thicker side walls of the phone, and of course, that flat display. By no means does the regular Pixel 6 feel cheaper, it just feels flatter in various ways. If anything, I find it more comfortable to hold, which sounds odd when you consider the curves to the 6 Pro that should make it fit better in the hand. There’s something to a flatter phone design that aides in grip and usability.

After the in-hand differences, you’ll notice (at least I do) the difference in screen quality and speed. The Pixel 6 Pro absolutely has a better display and the 120Hz is noticeable vs. the 90Hz on the Pixel 6. Everything is smoother no matter what you are doing, don’t listen to or trust a person who suggests otherwise.

It’s hard to say if there is a big performance hit on the Pixel 6, knowing it has less ram (8GB vs. 12GB), but I do notice the occasional hiccup or stutter that I don’t recall on the 6 Pro. Not that the Pixel 6 is slow or frustrating to use, there are just times that you’ll spot a frame drop and wonder the cause.

And then finally, there is the camera to talk about. The Pixel 6, without that extra telephoto lens, is technically a step down. Well, in versatility it is too, depending on how much importance you put on a telephoto lens. During my 6 Pro review period, I really thought I wouldn’t be able to live without that lovely and talented telephoto shooter, but here I am weeks later without it and haven’t really missed it. Since the rest of the cameras are the same, that’s all there is to know.

You get the same excellent camera performance out of either phone with its 50MP and ultra-wide lenses, which will take care of most situations. I’m sure at some point down the road, on a hike or traveling, I’ll find a need for the telephoto, but the other issues I have with the Pixel 6 Pro outweigh that rare use case.

So yeah, when going between the two, you’ll notice the screen differences, the shape of the phone in hand, and (maybe) some performance hiccups. Other than that, these phones are very similar, yet one costs $300 less.

Why I can’t go with the Pixel 6 Pro

Back to that Ontrac story for a second – that original pre-order I put in for a Cloudy White Pixel 6 Pro never arrived. Instead, they marked it as delayed with delivery expected the following day for 22 days and then figured it was lost. Thankfully, Google shipped me a replacement well before that saga ended. Once it (finally) showed up at my house, I was pretty excited to fire it up after using the Pixel 6 for a few weeks and do another comparison between the two to make a choice on my phone going forward.

The Pixel 6 Pro is just too f*cking big, man. I love the display, the design, the performance, and its lovely haptics. I could certainly find uses for that telephoto lens more often if I had it. But since Google only gave us a tablet-sized Pro phone this year, it will be a year that I go with the downgraded version.

It sucks. I’m borderline mad at Google for doing this. From the Pixel 1 through the Pixel 4 (and sort of with the Pixel 5), Google has given us options where we get two phones with identical specs that really only differ in size, because choice is good and not everyone wants a massive phone to carry around with them at all times.

Apple gets this. Samsung…OK, only Apple gets this. Maybe they are the only ones large enough to be able to get this and deliver on it, but holy shit to the Android world – give us some freakin’ smaller phone options.

Doing almost any life task brings unnecessary stress when you have a phone like the Pixel 6 Pro with you. It’s slippery, has too much glass, and feels fragile enough that setting it down almost anywhere will taunt you about potential disasters. And no, I’m not putting a case on the behemoth of a phone to protect it that will only make it even bigger. That’s absurd. Not all of us want a damn case on our phones. We want phones that can be used with a single hand.

News alert here, phone makers – a whole bunch of us don’t give a shit about watching video all day long on our phones. We use them as if they were a tool, for messaging and email and news reading and lists and controlling our homes and other actions that we don’t need a 7″ display for. A 6″ or even slightly smaller would be just fine, because we’ll be able to do things on them without much effort, like without a second hand.

And look, the regular Pixel 6 is not that much smaller. I’m annoyed at it too. But like I mentioned earlier, it’s much easier to handle because of its flatter, thicker sides and slightly smaller footprint. It’s not really in one-handed territory, but it comes close. 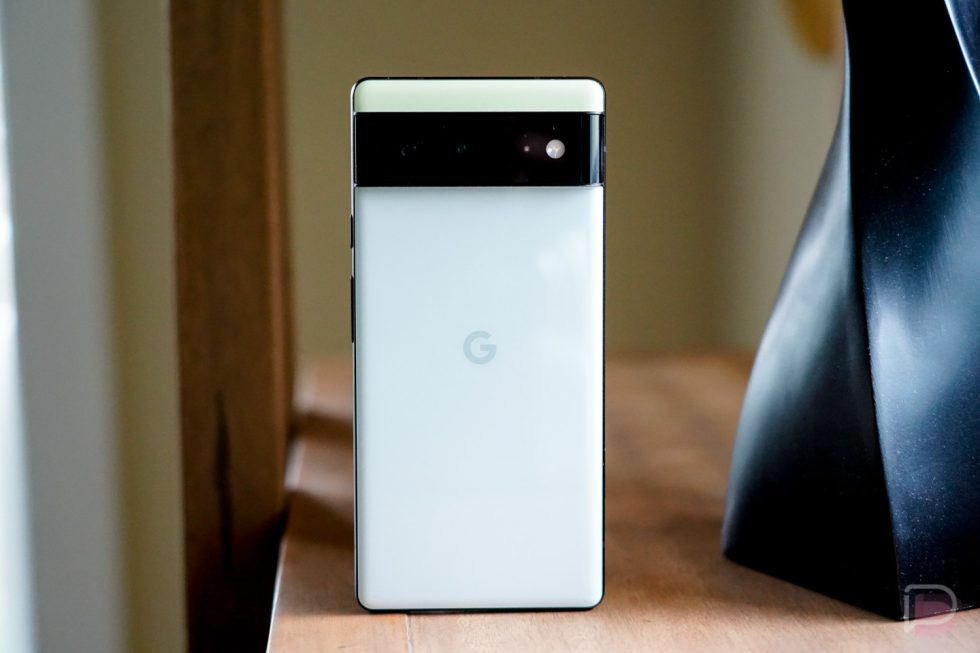 I guess it’s the Pixel 6 for now

We’re at the end of another year in smartphones and so we know exactly what our choices are. When looking around, the Pixel 6 is probably the best phone for me, even if I don’t absolutely love everything about it.

I have a Galaxy S21 here, and it’s fine. It falls inline with the Pixel 6, in that Samsung made the Ultra the ultimate phone with everything and then issued the S21 as the lesser version with some significant cuts. My issue with the S21 is that the early tastes of One UI 4 aren’t great. I much prefer Android 12 on the Pixel line over Samsung’s current take. I also never really loved the S21 and its cheap body, as you probably recall from my review.

OnePlus phones would be the other option, except they feel so far removed from what we all once appreciated about OnePlus. I have serious concerns about the software experience going forward, their phones are also all massive tablet phones with glass and curves, and they aren’t cheap.

And since I just ran through why the Pixel 6 Pro isn’t for me, that leaves me with the Pixel 6. I really do like Android 12 and the Pixel experience, the cameras, performance, and the overall design. This phone will do the trick for now and probably up until the Pixel 7 shows up in a year from now.

Or maybe I’ll just keep defaulting back to this iPhone 13 Pro. Thanks for giving us choice, Apple.