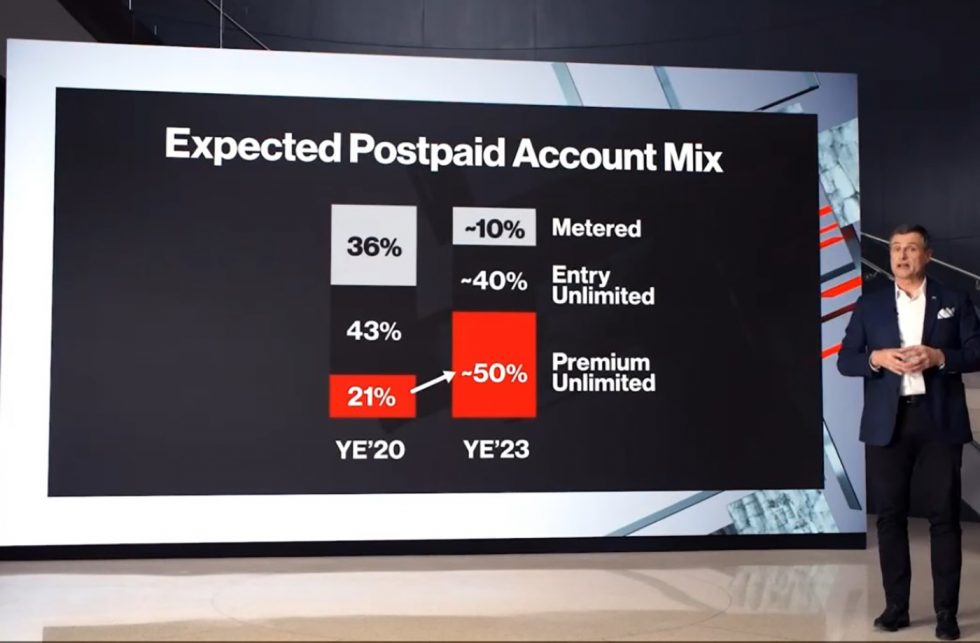 Verizon invited us to listen in on a big investor call from the company last night where they spent an enormous amount of time talking about all of the C-band spectrum they just picked up in a recent spectrum auction. They talked about other items and services too, but the bulk of the important talking points involved all of their new spectrum and how it’ll change their 5G network going forward. Maybe more importantly for investors who were on the call, Verizon explained how C-band is going to help the wireless carrier convince customers to pay even more.

It’s such big news from Verizon because it lets them finally play in the mid-band 5G space and better compete with the network that T-Mobile is already well into building out. Mid-band is key to 5G being awesome for everyone, you see, because it’s both fast and able to cover large areas. Unlike everyone’s nationwide 5G, which covers areas yet is often slower than 4G, or 5G mmW which is fast but can’t work through a window, mid-band is the best of it all.

Since C-band is the best and Verizon just paid billions for it ($53B), Verizon isn’t going to make it free to use for just anyone. You see that image above that I snapped from the investor call? Let’s talk about it!

Currently, Verizon sells a number of wireless plans, some unlimited and some not. As that image above indicates, the smallest mix of subscribers pays for what Verizon calls “Premium Unlimited.” The bulk (79%) of their customers are in either metered plans or “Entry Unlimited.” Verizon sees a big opportunity to change that over the next couple of years with the help of C-band.

“Premium Unlimited” plans are those with access to Verizons’ 5G mmW (“Ultra Wideband”) network and include the Play More, Do More, and Get More options. Verizon plans to include C-band under the “Ultra Wideband” umbrella, thus making it a “Premium” feature.

By 2023, Verizon is predicting that they’ll convince almost half of their customers to switch to one of those “Premium Unlimited” plans, thanks to the experience it’ll offer. That experience will be based off of their fast 5G offerings, which include C-band and 5G mmW (“Ultra Wideband”). If a customer doesn’t pay for a “Premium” plan, they would then be stuck on the slower 5G nationwide experience.

I hope you are scratching your chin right now and saying, “Well this sucks and is not at all surprising,” because, yeah. We knew when 5G started to become a thing that carriers weren’t going to just hand it to you for nothing. Sprint was early in suggesting they would increase prices, but others weren’t so open about those plans. They are being more open now that they are starting to build out their next-gen networks.

To recap, Verizon bought a whole bunch of important spectrum that will make their 5G network good. Because of that, they hope you’ll want to pay for it by subscribing to their most expensive plans. Got it?