You may recall a few weeks back when we noticed a reference to unlimited plans on Verizon’s website that didn’t actually exist, almost as if they were hinting at new plans close to being announced. Today, we’ve got details on those new plans that should arrive within the next week.

According to a reliable source, Verizon will introduce four new unlimited plans called Get More, Do More, Play More, and Start Unlimited. These new plans certainly give Verizon customers more choice (and confusion), but they appear to be at lower starting prices than Verizon’s current Above, Beyond, and Go Unlimited plans.

The new Verizon unlimited plan line-up looks like this: 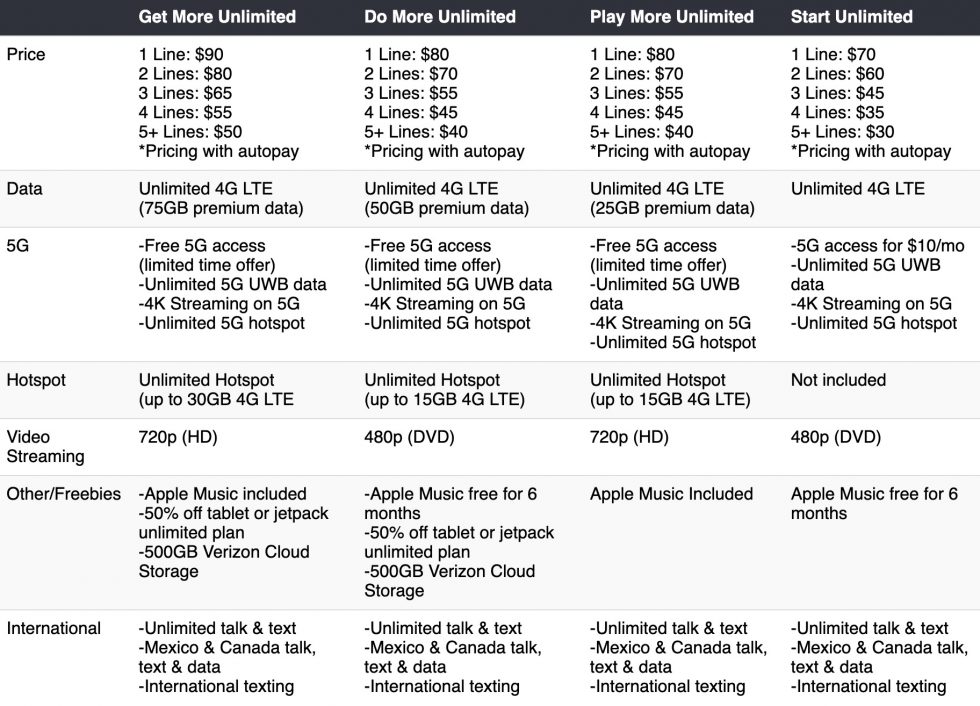 What’s different here compared to the old plans? For one, the top Get More plan is $5 cheaper (with autopay) than the current Above Unlimited plan on all line situations. In addition to the cheaper price, it’s basically the same plan, only now it includes 30GB LTE hotspot vs. the 20GB it previously had. But you still have 75GB of premium data there, free Apple Music and 5G access, and 720p HD streaming.

The confusing part here are the separated Do More and Play More Plans. They cost the exact same amount at all line setups, but differ in a couple of areas. Do More has more premium LTE data (50GB) to use each month, but only 480p video streaming and 6 months of free Apple Music. The Play More plan has less premium LTE data (25GB), but has 720p video streaming and free Apple Music for longer than 6 months.

The Get More and Do More plans give customers a 50% discount on tablet and jetpack unlimited plans, plus all plans now include 500GB of Verizon Cloud Storage. That perk used to only be included in the Above Unlimited plan.

Finally, the Start Unlimited is obviously the entry-level plan that replaces the Go Unlimited option. It features no premium LTE data, no hotspot, and 480p video streaming. It’s $5 cheaper for all line setups, though.

We’re told that the new unlimited plan line-up will be introduced tomorrow (8/2) and available starting 8/5.