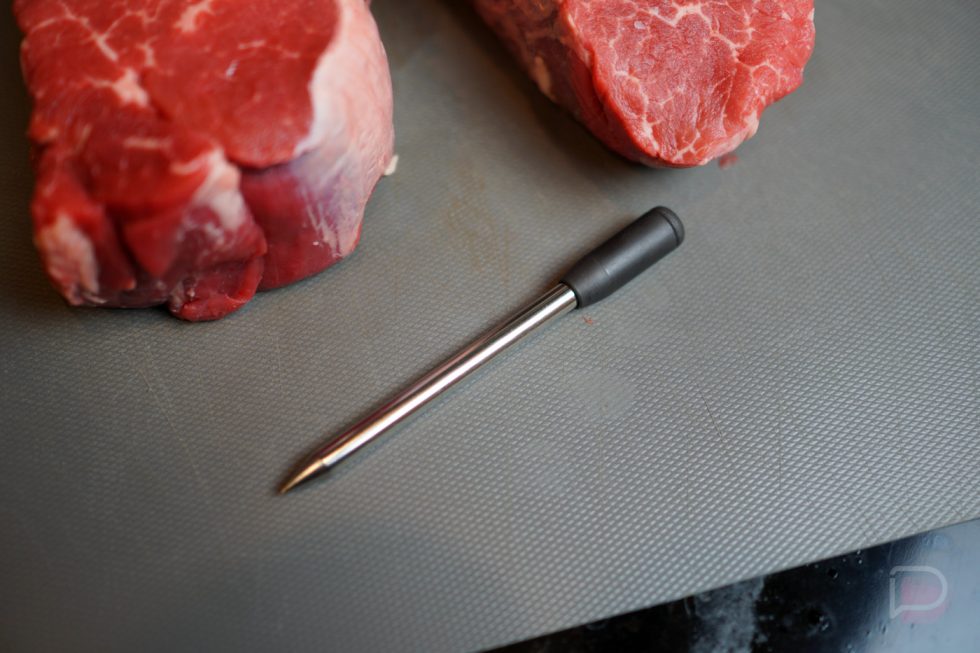 It was a while ago when I was first introduced to the MEATER smart thermometer at a Pepcom event during CES. Since then, I’ve been using it all the time to cook steaks on the BBQ and bake other meats like chicken and fish. Smart thermometers really take any guess work out of nailing proteins, and when you have someone who lacks confidence in their ability to cook meats — such as my wife — it helps to have a device capable of instilling that feeling. Now, we’re seeing more companies enter the smart thermometer space, with this Yummly device being the latest to catch my attention.

For a bit of background, Yummly is a recipe search engine app that’s been around for some time. In 2017, it was acquired by Whirlpool, who I believe put KitchenAid in charge of manufacturing the device itself. To use the smart thermometer, you have to download the Yummly app, which then technically offers dual functionality in being a recipe book filled with tons and tons of different cooking ideas, as well as the control center for your thermometer. With that out of the way, let’s get onto the cooking. 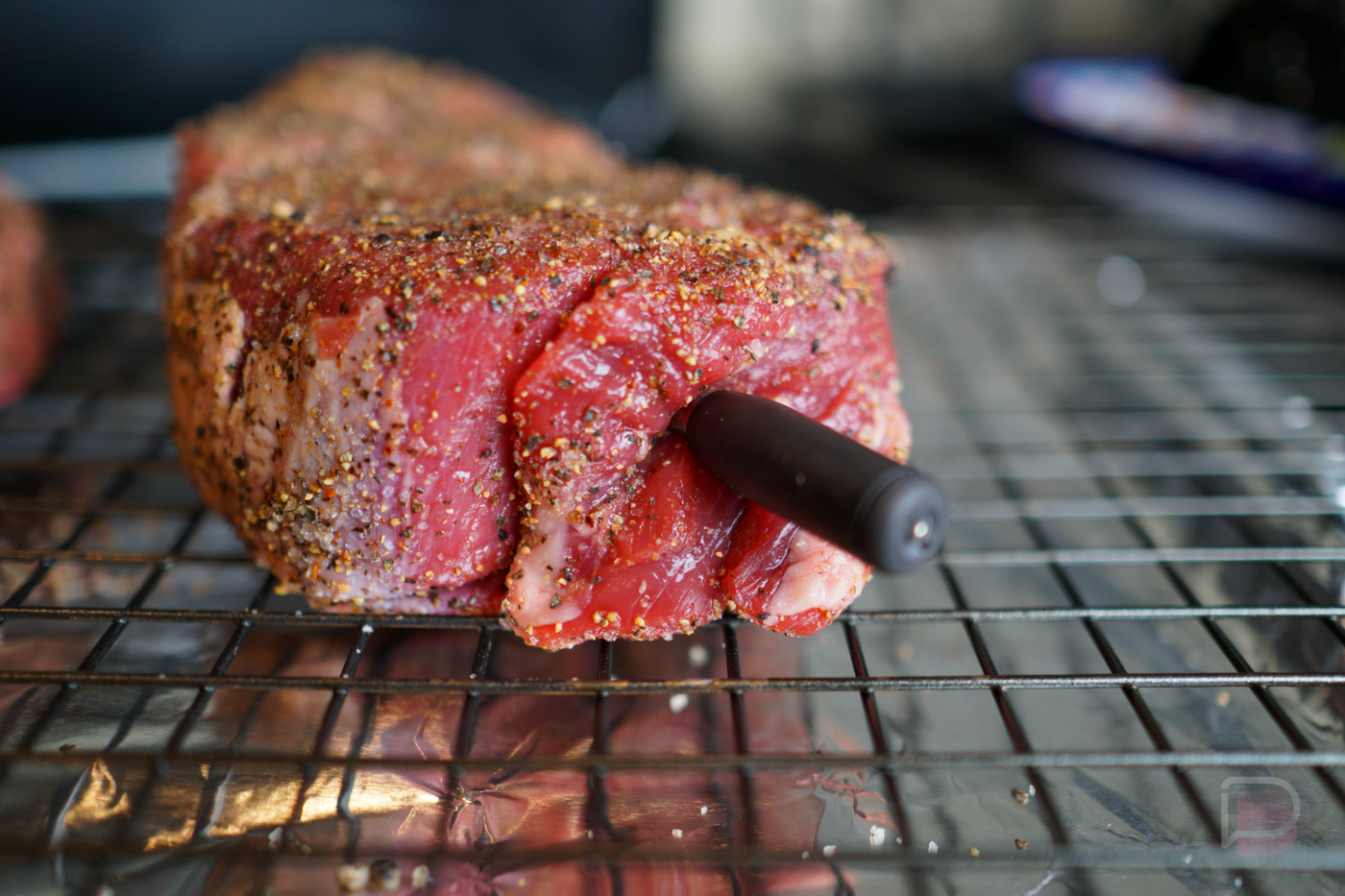 Yummly kindly sent along a thermometer for me to test, so I asked my lady what kind of steak she wanted for dinner. I’m a ribeye lover, but she enjoys tenderloins and filet mignons. We opted for a couple massive tenderloins, which determined the technique I’d utilize for cooking. Not to get too deep into the philosophy, I went with a reverse sear, which is actually a perfect way to show off how this Yummly device works. To reverse sear, simply prep your meat with seasoning, insert the probe (thermometer), then stick it into a heated oven and let it get up to temperature. Personally, I cook until the internal temperature reaches 113°. Once your desired temp is reached, you toss that meat onto a searing hot pan. Let the outside of your meat get nice and browned, then you’re done. It’s an easy way to cook thick cuts and not worry yourself about over or undercooking an expensive piece of meat. 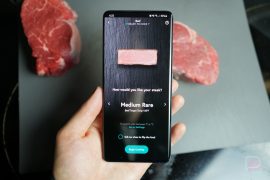 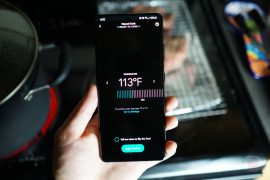 With Yummly, the setup process was as simple as can be. You take the probe out of its dock, which has a Bluetooth range of 150ft. for transmitting cooking data, and then use the Yummly app to determine what it is you’re cooking (fish, steak, pork, chicken, etc.). You can manually set the doneness you desire or select one of the predetermined temperatures. Once you have the device programmed and connected to your phone, you’re ready to cook.

The device has two sensors for gauging temperature: an internal heat and ambient heat sensor. Depending on what you’re cooking, you may or may not need that ambient heat sensor, but for those who smoke meats overnight and need a consistent reading, that ambient sensor can be very clutch. It will also help you from damaging the device, as there is a max heat limit of 572°F for the ambient sensor. The internal heat limit is 210°F. That means you don’t want to exceed that limit for any amount of extended time. However, this device can withstand flare-ups of up to 1100°F for 3 minutes, which is important for those who plan to use this in a BBQ setting. Just to compare, the MEATER+ probe can withstand ambient temps of 527°F, slightly lower than the Yummly. 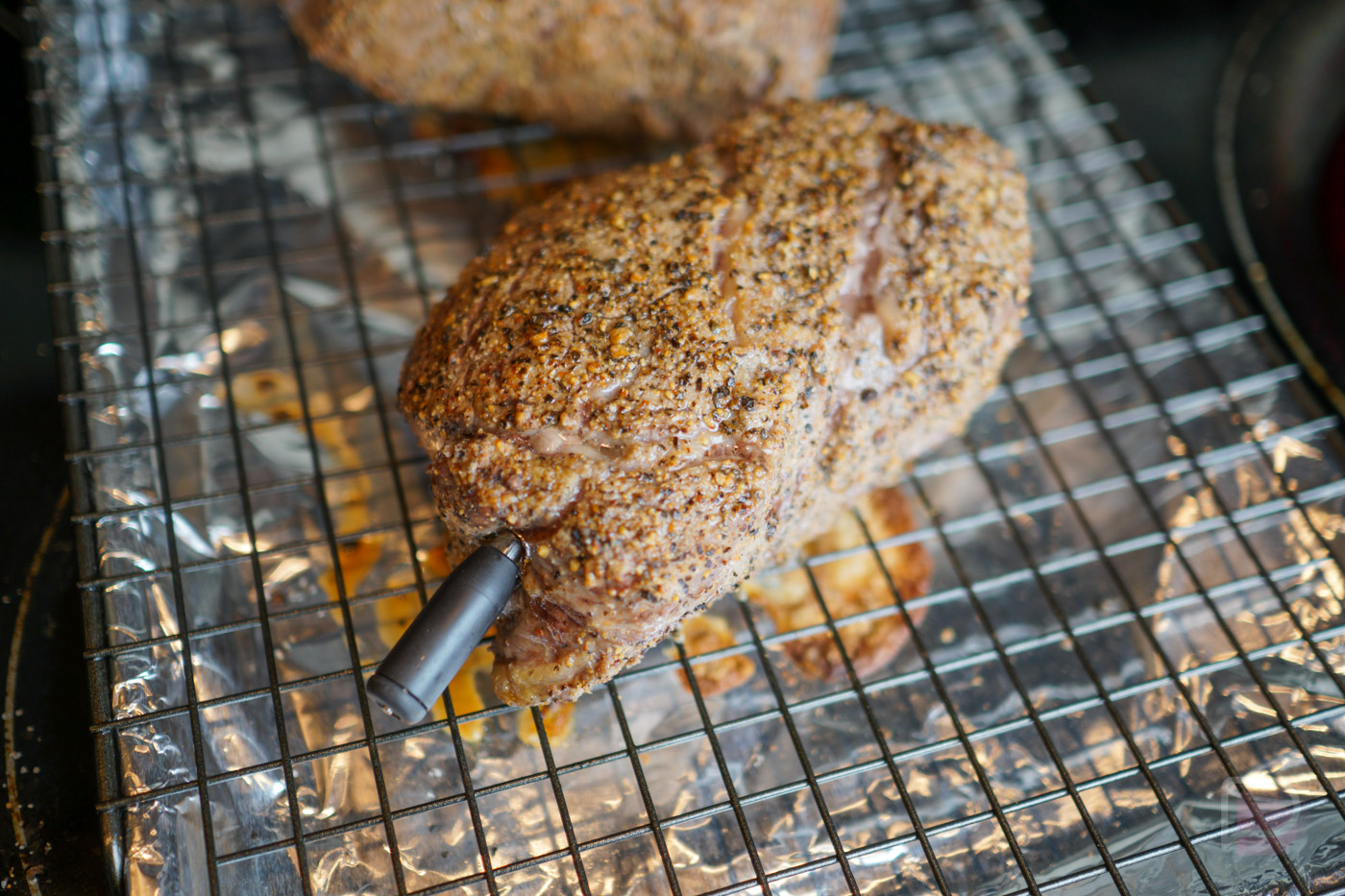 Once a cook has begun, the app can use the ambient temp and internal temp and calculate when your meat will be completed. I find that it doesn’t update all too quickly, especially when you have a fluctuating source of heat, though, it does work in an oven setting pretty well. If you’re not too concerned about timing, such as me, you simply watch your phone for that meat to come up to temperature. Obviously, this is what you can do with any digital thermometer, but there is a convenience factor with these smart devices.

With the dock stationed close to your cooking meat, you can walk away from the oven or grill and still be completely in the know of what’s happening with your meat. Last night, I sat on the couch watching Dame Lillard hit half court shots during the All-Star game while watching my tenderloins come up to temp. Some folks are willing to pay for that added convenience, while others may not be. That decision is up to you, but what I can say is that using this Yummy device was supremely easy and my meats turned out perfect. 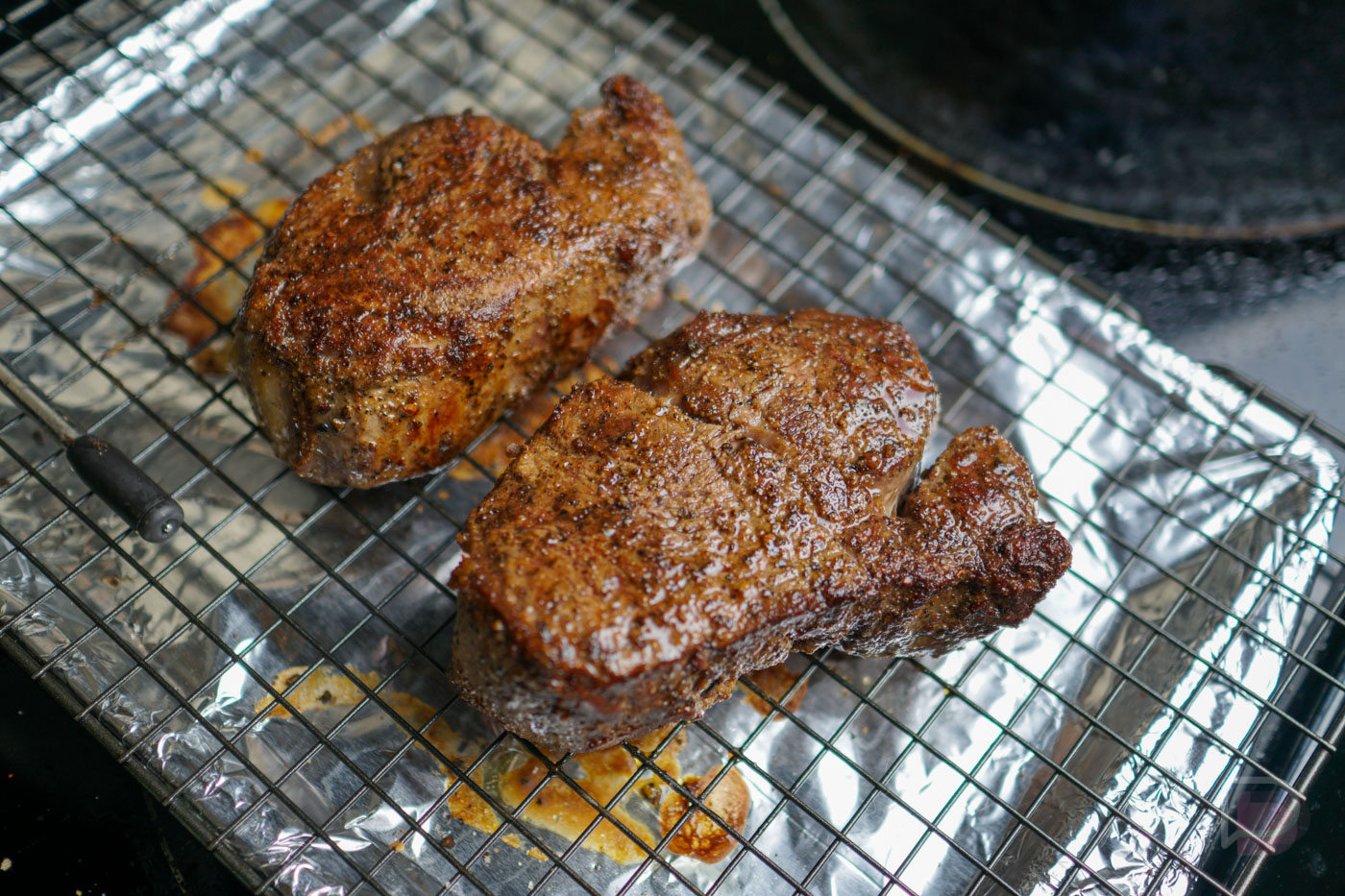 Right now on Amazon, you can get the Yummly smart meat thermometer for just $89, down from its usual $129 price. A MEATER+ will cost you $99, and honestly, this Yummly device seems solid at the moment, but there is one thing MEATER has a big advantage on. That advantage is the ability to handle multiple cooks simultaneously. Many folks, myself included, maybe cook two different cuts or proteins at the same time, which this Yummly app doesn’t support. You’d need two probes and two phones running. MEATER can handle up to 4 probes with one phone (using the MEATER Block), making it much more versatile. However, Yummly does state that multi probe support is coming down the road. Once that happens, it’ll be very interesting to see which device people opt for.

Personally, with the Yummly probe’s ability to withstand those higher cooking temps, I may have a new kitchen buddy for the time being. I won’t know for certain unless I use it a lot more, which I plan to do. All in all, they both do the same thing very well, which is helping even newbs prepare a perfect steak. 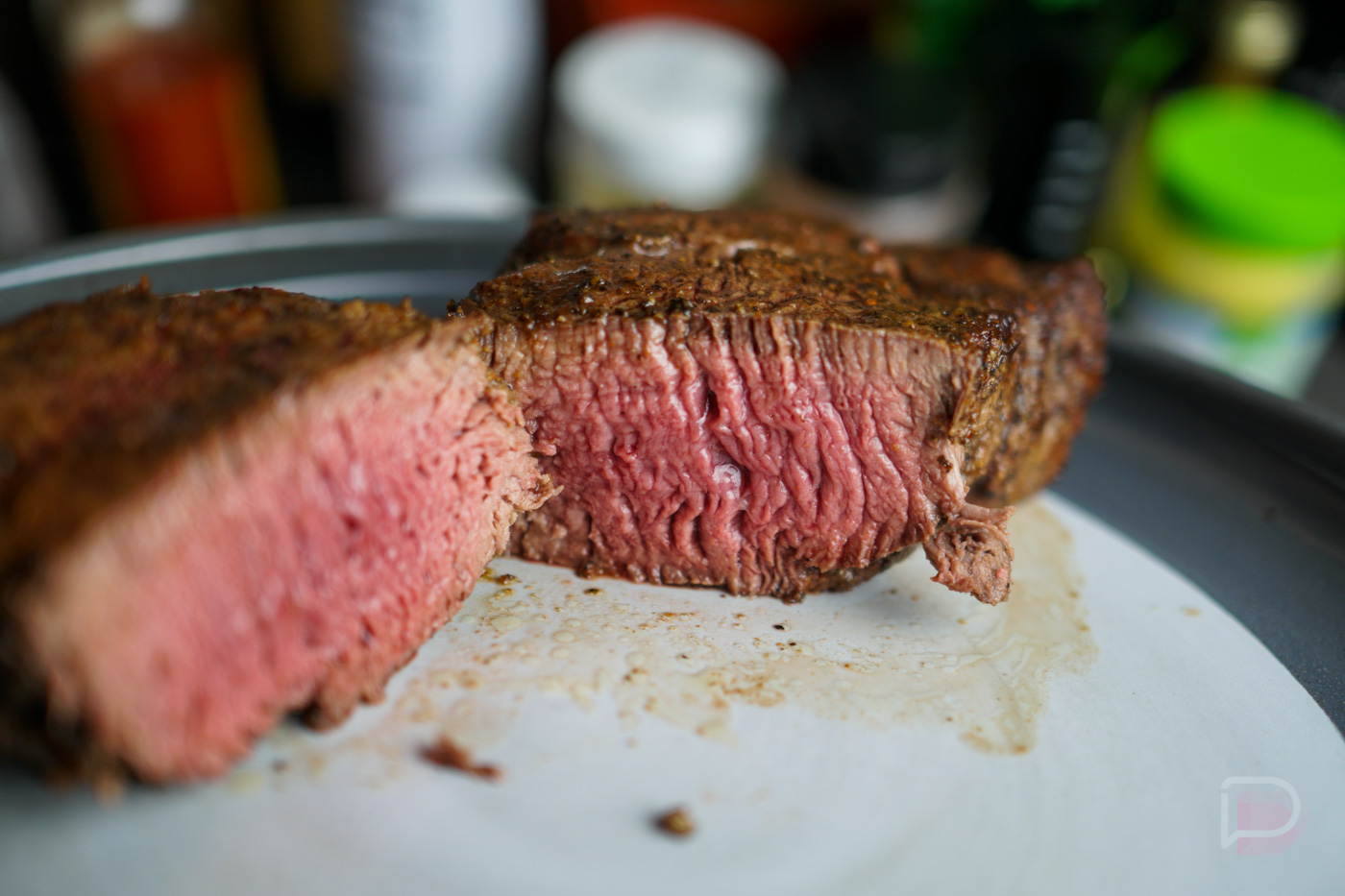 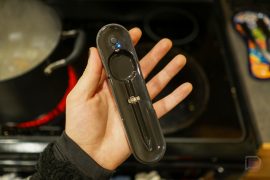 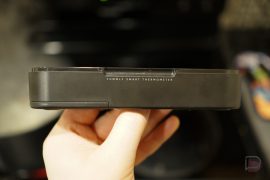