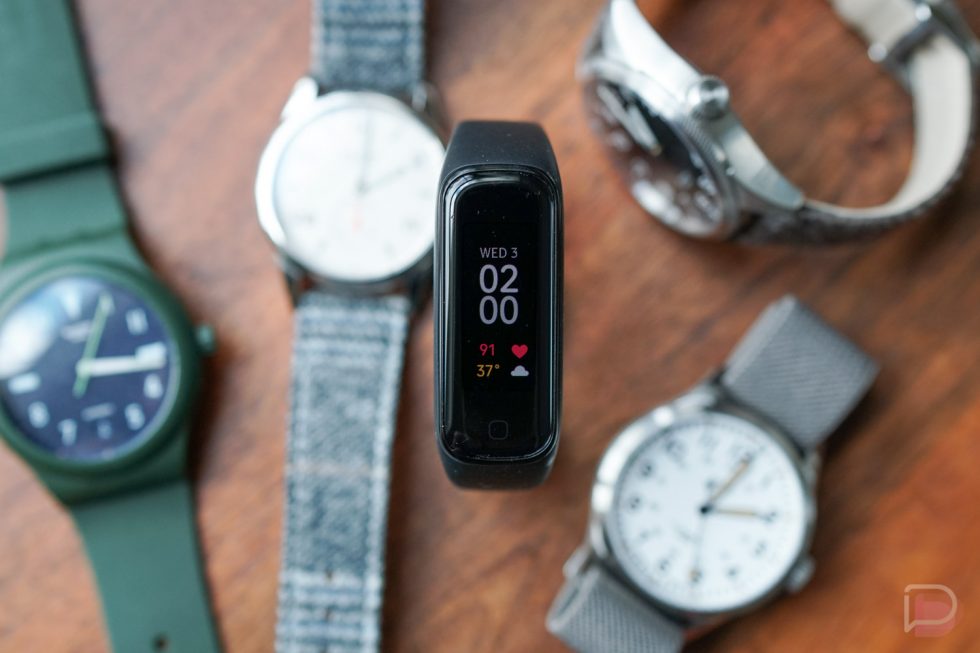 Smartwatches have been a big part of my tech life for several years now. From before the launch of the Snapdragon Wear 3100 through the Galaxy Watch Active 2, several fitness-focused “smart” watches like those from Garmin, and the most recent Snapdragon Wear 4100, I haven’t lived without a smartwatch of some kind on the wrist since mid-2017. Every major watch that has dropped ended up in-house for testing and I often switched over until the next one. I am most definitely a “smartwatch guy.”

Over the past couple of months, I made a pretty dramatic switch away from them. I ditched the smartwatch completely and am now a full-time fitness band user. Yes, the basic, hardly-smart-at-all fitness bands that Fitbit made popular and have since become somewhat of an afterthought for fitness tracking with the popularity of smartwatches like the Apple Watch, is how I now track everything. To be more specific, I’ve been using Samsung’s new Galaxy Fit 2.

When making this decision, you could look at the fact that this global pandemic has introduced a number of changes to life, but that would sort of sell short my reasons. I say that because my reasons for dropping to a fitness band could apply at any time, pandemic or not.

Growing sick of so much charging

The first big reason stems from a growing frustration about having to charge watches every day or every other day. You probably knew this reason was coming, but it’s worth noting that a typical Wear OS or Samsung smartwatch gets 1-2 days of battery life on a charge. If you mix in workouts, GPS usage, their always-on displays, or heavy interactions with notifications, it only shortens life from there.

With a fitness band, typical battery life is 1-2 weeks depending on use. The Xiaomi Mi Band 5 is rated at 14 days, the Fitbit Inspire 2 is rated at 10 days, and the Samsung Galaxy Fit 2 is rated at 15 days. When you have a wearable that you need to charge once every couple of weeks, it eliminates battery life as an issue. After having spent the past couple of months with one, I can tell you that battery life is something I never think about anymore. Not only that, but when I do get the vibration that my band is down to 15% or so, plugging it back in gets it fully charged in less time than most smartwatches.

Now, I could just use a non-Wear OS or Samsung smartwatch, like a Garmin watch or one of those entries from Amazfit, since they get multi-day or week battery life, but then that brings us into this next section. 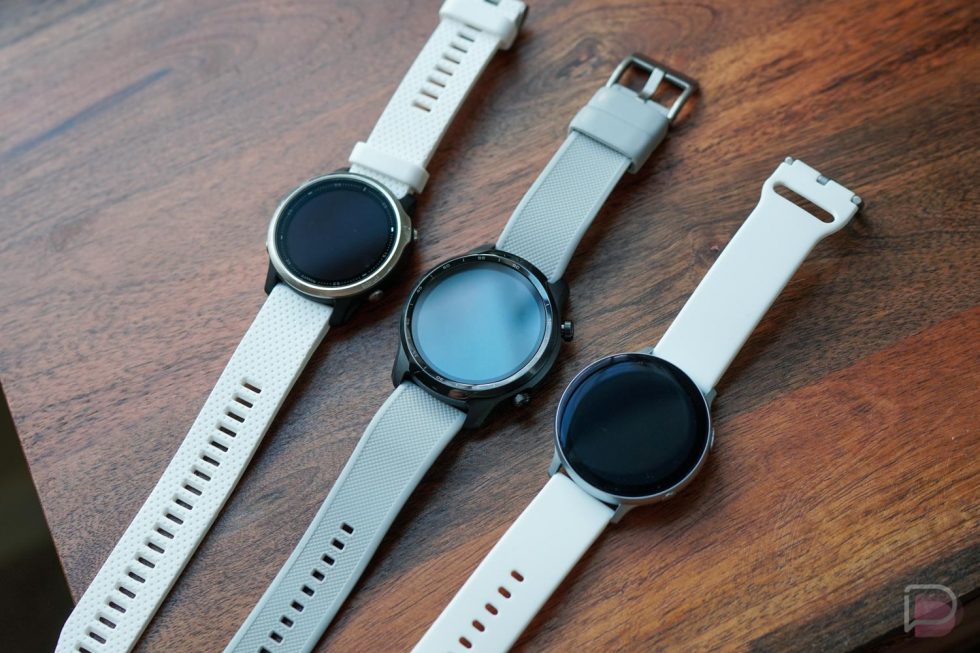 A change in workout routines

Another area I looked to as a reason for change was in my fitness tracking needs. For years now I’ve been a runner and found quite a bit of joy and personal fulfillment out of pounding the pavement several days per week. I’ve run half marathons and Oregon’s Hood to Coast, Spartan Races, and other running-first competitions. Running is awesome. But after a couple of years of not finding the time to log the number of miles I want and a growing dislike of the Pacific Northwest’s awful wet weather that consumes us 6-8 months out of the year, I decided a few months ago that it was time for a change.

I bought an indoor cycling bike (Schwinn IC4), signed up for Peloton, and am one of those spinning people. It’s weird to say that, but the change has been nice and here I am three months in fully enjoying a different way to sweat and stay in shape.

The thing is, when you go from an outdoor activity that requires GPS to one where you never actually move, having a big, bulky GPS-equipped smartwatch isn’t exactly necessary. I have a Garmin Fenix 6s that I love and will keep ready for when the weather improves and I lace up the Hokas again, but until then, it can take a break and a fully-featured fitness band can take its place on my wrist.

Similar tracking at a fraction of the size

Since I care about having data on my health and fitness history, rather than ditching a wearable altogether, the Galaxy Fit 2 slotted in place of a smartwatch. My main focus is to continue to have a long record of my heartrate, fitness level, and sleep efficiency in hopes that one day down the road it could provide insight into remaining healthy as I get older. Your boy is closing in on 40, so we gotta do what we gotta do.

When I looked for options to switch to I found that most fitness bands offered a similar set of features. Samsung’s Galaxy Fit 2, with 24-7 heartrate monitoring, sleep tracking (with stages), stress monitoring, automatic activity tracking, step counting, and high heartrate alerts, has most of what I need. It doesn’t track blood oxygen (SpO2) or give me a VO2 Max score, and again there is no GPS, but at the moment I can live without that stuff for what I’m doing.

I have a semi-silly setup of apps that all try not to talk to each other, so I’ve had to deploy several work-arounds. For example, the Fit 2 funnels data into Samsung Health, but as a big Google user who likes the easy-to-understand layout of Google Fit, I have to use a 3rd party app that I hope never turns shady called Health Sync to send specific data to Google Fit. I also use Wahoo to track my rides from the Schwinn IC4 (with its heartrate monitor too) and then send those workouts from Wahoo to Google Fit and Strava (where all my runs are). I also send Wahoo ride data through MapMyFitness, which then pushes activities to Samsung Health, because Wahoo won’t directly connect to Samsung. It’s a mess, I know, but it works.

What I’m getting at is that I care about data from my life and want to track it in several ways and a fitness band is able to do it just as well as a smartwatch, yet it takes up half the space on my wrist. My setup above sounds absurd, but even with a smartwatch, I’d have to do the same thing since most fitness platforms aren’t big on all talking to one another. 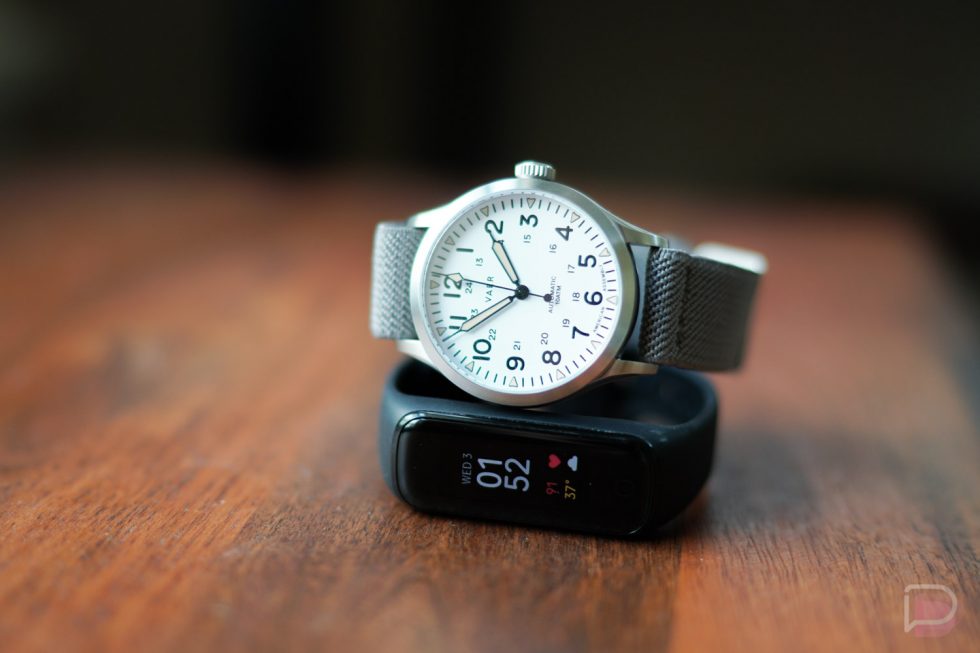 Why the Galaxy Fit 2?

I guess I haven’t really addressed this, but I did briefly test out the Fitbit Inspire 2 ($99) and a Xiaomi Mi Band 5 ($30) before settling on the Galaxy Fit 2 ($60). I think all are solid products and I could probably find satisfaction from any of them. I chose the Fit 2 because Samsung Health has enough of my data after spending a lot of time with the Galaxy Watch Active 2 and some of their other watches, plus its little display looks great, it displays notifications well, and it comes close to matching the functionality of a basic smartwatch.

I skipped the Inspire 2 because there was no Google Fit integration (I can’t believe this still isn’t there), it’s display wasn’t as nice, battery life wasn’t rated as long, and I didn’t love the fit on my wrist. I also just don’t think I like Fitbit’s hardware that much, especially after spending time with a couple of their smartwatches. I passed on the Mi Band 5 mostly because their app is quite weird to navigate. That band is probably the one that fit me the best and its overall design is the slickest, but I’m not ready to setup shop on an entirely new fitness provider when Samsung already had a good amount of my history.

So yeah, the Galaxy Fit 2 made the most sense in a situation where I couldn’t actually find the perfect band.

If you are wondering how I’m adjusting after wearing a smartwatch for so many years to not wearing one, well, I’m getting along just fine. Smartwatches to me became notification machines and fitness trackers. I never used them for much else. I always found their voice dictation to be terrible, Assistants to never work well, and the lack of apps always forced me to grab my phone for everything anyway. Smartwatches hardly simplify life.

With a fitness band that has a display and receives notifications, I mostly get what I was getting out of the majority of smartwatches.

All of that set aside, the final and what could be considered biggest reason for switching out of a smartwatch is because I missed wearing real watches. In 2015, I bought my first automatic watch and that set me out on an obsessive journey that involved buying and selling multiple timepieces to try and create a collection that represented me now and hopefully will continue to into the future.

Unfortunately for Kellen the wannabe watch collector, somewhere in 2017 I got really interested in wearing smartwatches and that small group of mechanical watches got pushed to the back of a shelf. I don’t know what brought me back to them in 2020, but it’s probably a lot of what I shared above and also because 2020 proved time and time again that life is short and we need to appreciate the things we have while we still can.

As someone who wouldn’t be caught dead wearing both a smartwatch and a regular watch at the same time, I had to make a choice. So yeah, I put the smartwatches aside and bought this silly Galaxy Fit 2 and a spin bike to let me start wearing watches again, watches that wind themselves or at the very least, with the twist of a crown. I’m pretty happy about it all too.