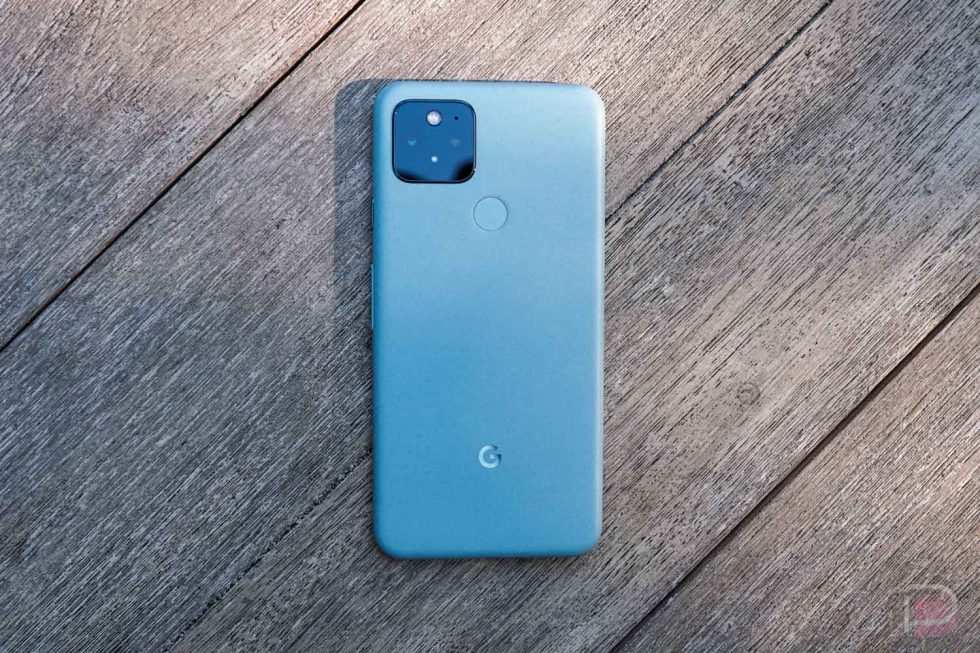 Through all of the years of phone release from Google, I’m not sure there is a single phone I would look to as being a battery champion. If anything, most of Google’s previous phone releases (especially Pixel devices) had batteries on the smaller side compared to those from competitors, and it showed. But with the Pixel 5 and Pixel 4a 5G, Google has included larger batteries, plus they’ve coupled them with a processor that is proving to be quite efficient.

Over the past week or so, we’ve been testing both phones and tracking our battery usage to report during our full reviews. Since those reviews aren’t quite ready yet, we thought you might appreciate an early look at how both the Pixel 5 and Pixel 4a 5G are performing during a day on a single charge.

Below, we have battery results for the Pixel 5 followed by the Pixel 4a 5G, and I think you’ll be impressed by what you’ll see.

My Pixel 5 battery life testing has been broken up over the past week, mostly because I happened to be reviewing the OnePlus 8T at the same time. That meant a couple of days on the 8T, then a break to use the Pixel 5 before the 14th, followed by a re-focus back on the 8T, only to now return to the 5. What I’m trying to say is that my usage has been all over the place, but I have had at least three full days where I used nothing but the Pixel 5.

In the two sets of screenshots below, I hit between 5 and 6 hours of screen on time on a single charge, with the phone not seeing a charger until I was ready for bed later that evening. For me, that’s heavy usage, as most days I’m between 3-4 hours of screen on time. The fact that I was able to absolutely hammer on the Pixel 5 and still go to bed with 15-25% is pretty remarkable. 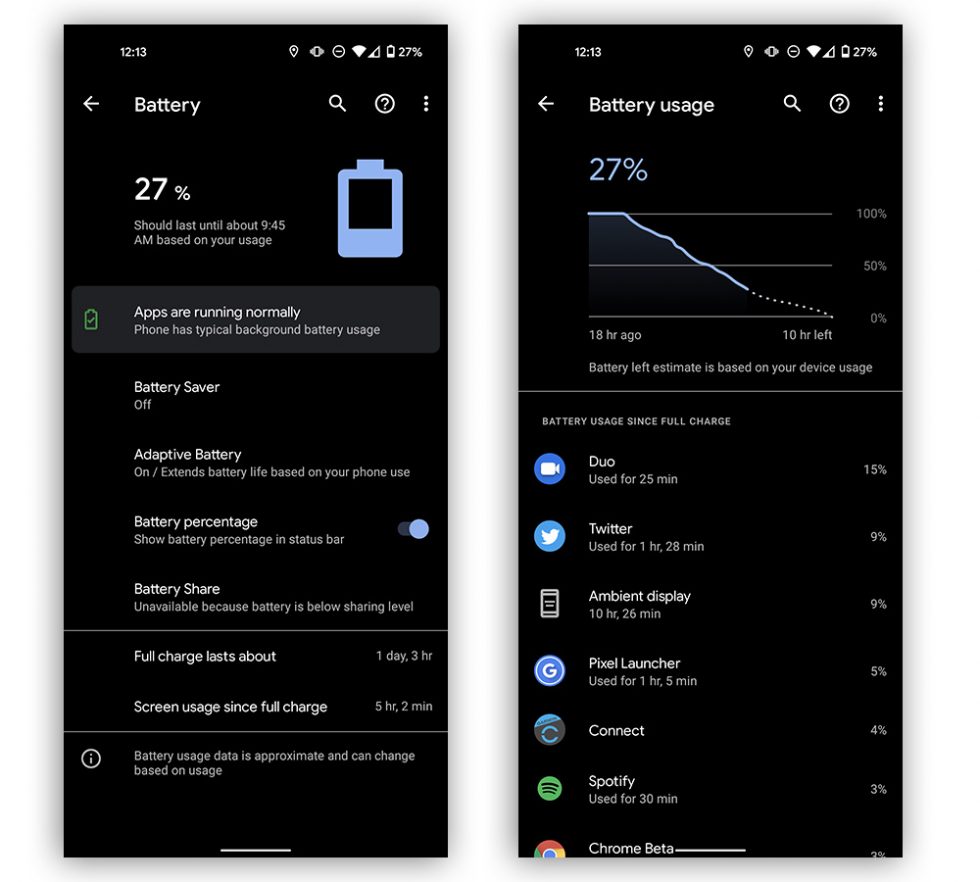 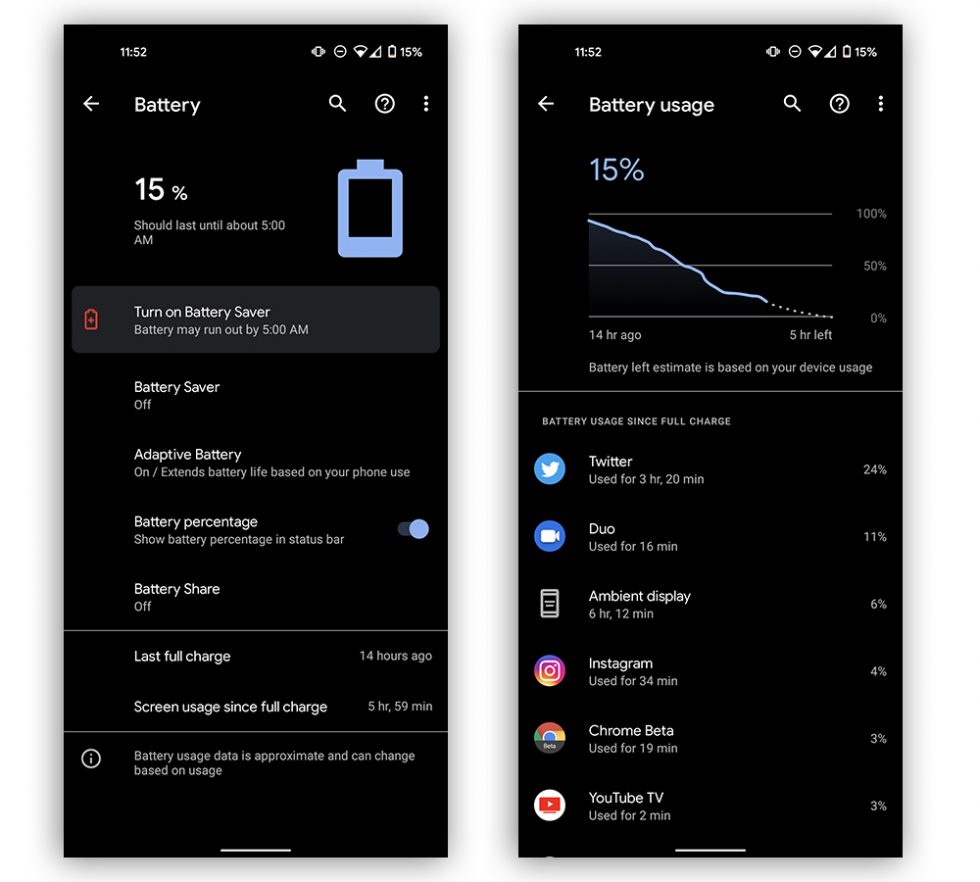 In the screenshot showing 15% battery remaining, the impressive thing there is that you are looking at battery life that includes factory resetting the phone, fully setting it back up, and then using it without needing a charger. That’s why the off-the-charger numbers show only 14 hours there. Again, that’s impressive.

I did mention that I had a full three days of battery life, but unfortunately, as I just acknowledged, I had to factory reset my Pixel 5 and forgot to backup that initial set of battery life screenshots before doing so. I can tell you that it was very similar (around 5 hours of screen on time) to the numbers above.

If you need another data point, today’s battery life is also looking great. It’s noon here in Portland, I’m at over an hour of usage, and still showing 90% battery. Not bad, right?

In the end, I think it’s safe to say that the 4000mAh battery (Google’s biggest yet) in the Pixel 5, coupled with an efficient processor in the Snapdragon 765G, has made for truly impressive battery life. And let’s not forget that this device has a display with a 90Hz refresh rate, which isn’t proving to be much of a drag.

Of course, I get done telling you that the Pixel 5 is their longest lasting and then you come to this section, where Tim shows his usage with the Pixel 4a 5G that is absolutely bonkers. The Pixel 4a 5G and its 3800mAh battery with Snapdragon 765G and 60Hz display are clearly adding up to being Google’s battery king. 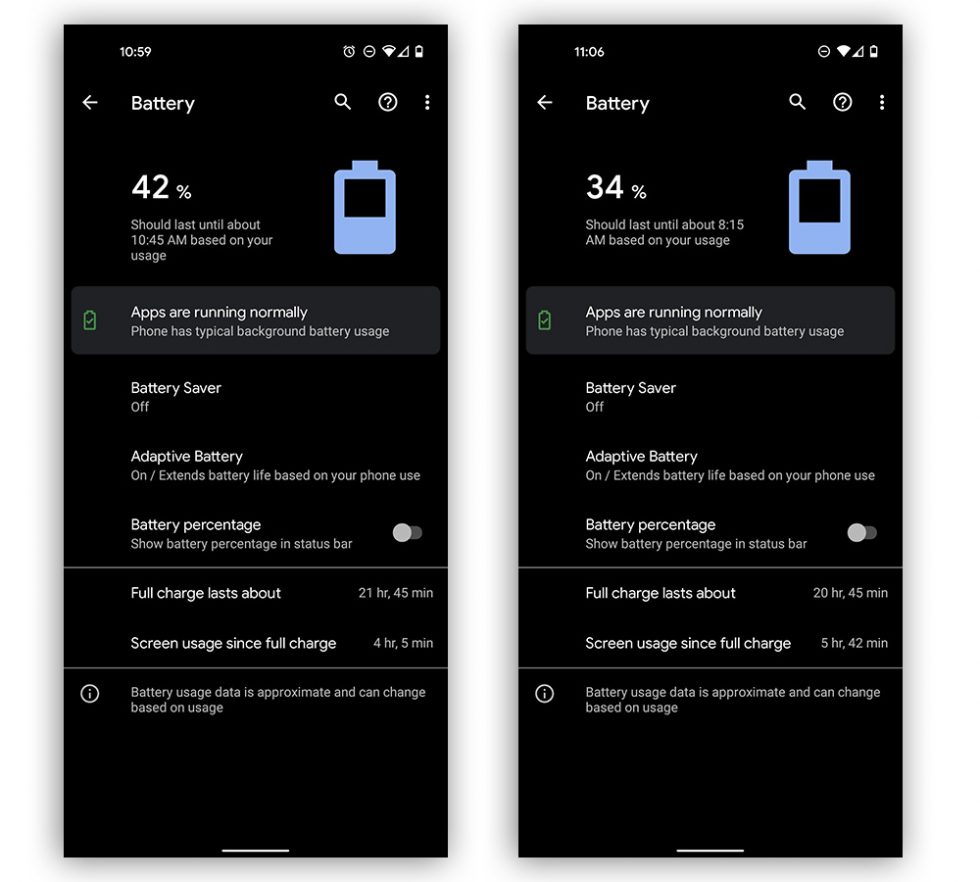 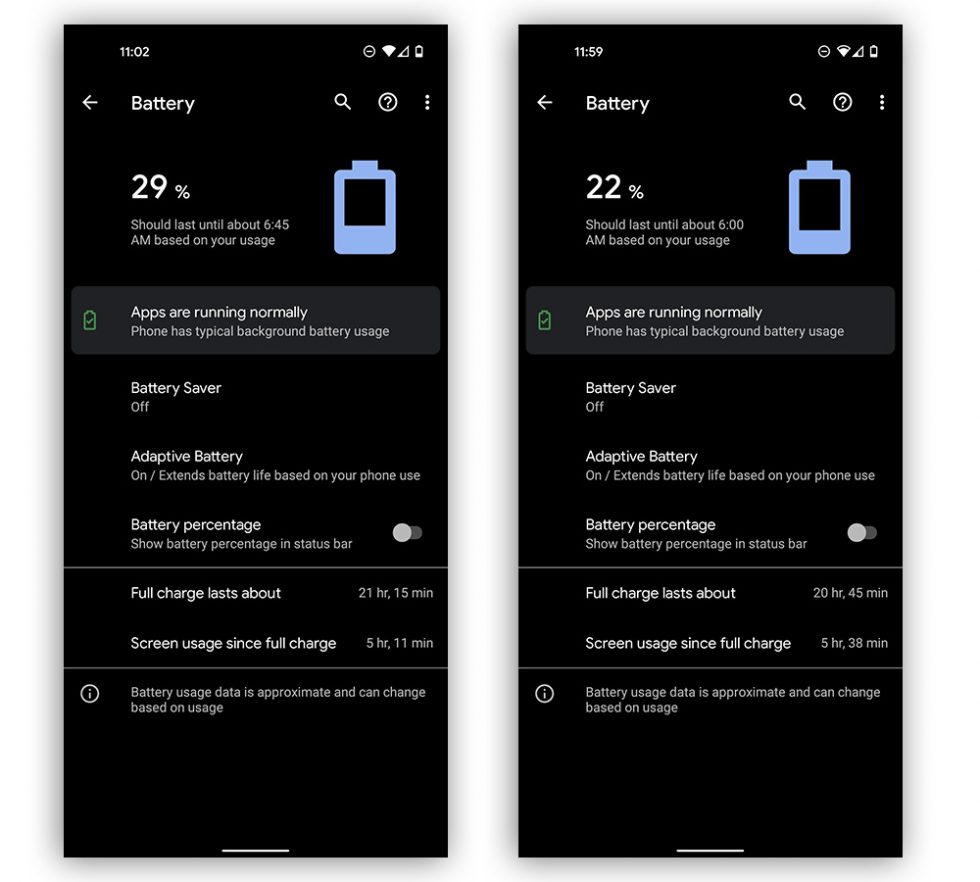 Through several charges, the Pixel 4a 5G hit the 5-hour screen on time mark and easily made it through a day with plenty of juice to spare. On one “lighter” usage day (4 hours of SoT), the phone still had over 40% battery remaining at 11PM.

The Pixel 4 was an absolutely disaster for Google in the battery life department. For the Pixel 5 and Pixel 4a 5G, they’ve really turned things around and offer a couple of phones that will give you no stress in between charges.