I learned today that iPhone users really love AirDrop and use it constantly throughout a day. The ease with which they can share files from phone to computer and back again (or with people) is a productivity feature I wouldn’t mind having in my life. As an Android user, that slick file sharing has never been a thing, but Samsung might try their best to make it one with Quick Share.

Discovered by XDA, Samsung is working on an AirDrop alternative for Galaxy phones called Quick Share. As the name suggests, this could work both as a quick file sharing service between nearby phones or to the cloud through SmartThings devices.

Screenshots shown here present those two options. If you choose to share with “someone nearby,” you should see a list of available folks who own supported Samsung phones or tablets that you could send a file to. If you chose the SmartThings share, you get to upload files to SmartThings devices that are temporarily hosted through Samsung Cloud and then streamed to the SmartThings device. For that, you are limited to files 1GB in size and a max of 2GB per day. 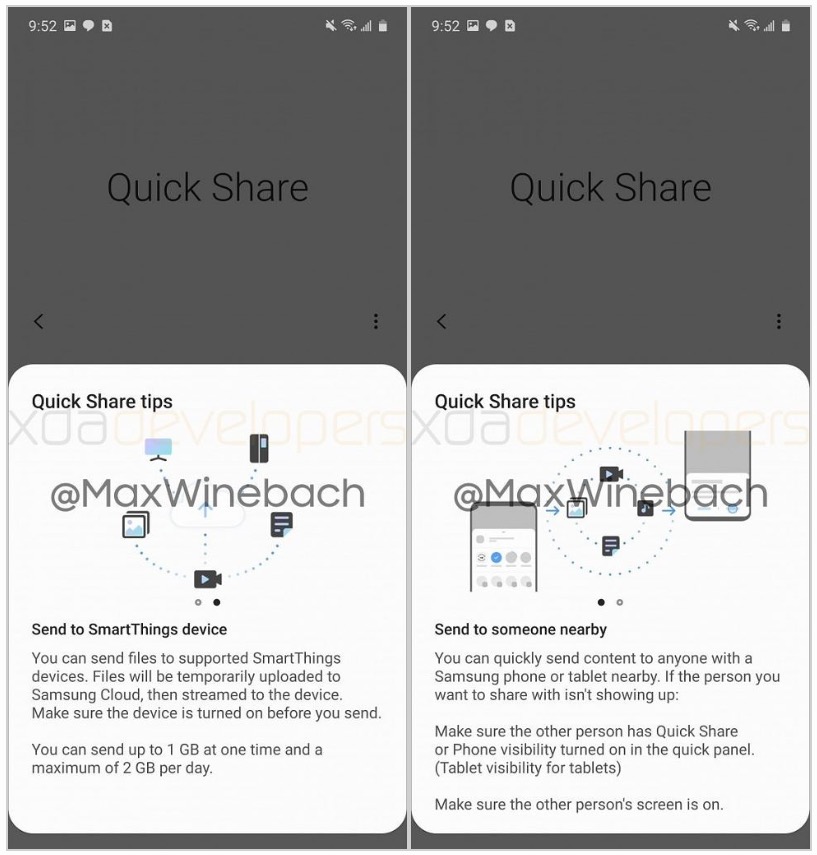 OK wait, that sounds nothing like AirDrop. I know, the world is getting a little ahead of itself here. Instead, this is more of a local sharing service that is limited to Samsung phones/tablets and probably won’t be used by any of us. Just share your photos and videos through Google Photos, it’s so much easier. Or maybe the similar service that Google is working on will be cool.

We might not see Quick Share until they release One UI 2.1 (it’s not a part of One UI 2.0) or the Galaxy S20 line. Once it does, we’ll try to fill you in on whether or not this is anywhere near Apple’s AirDrop.