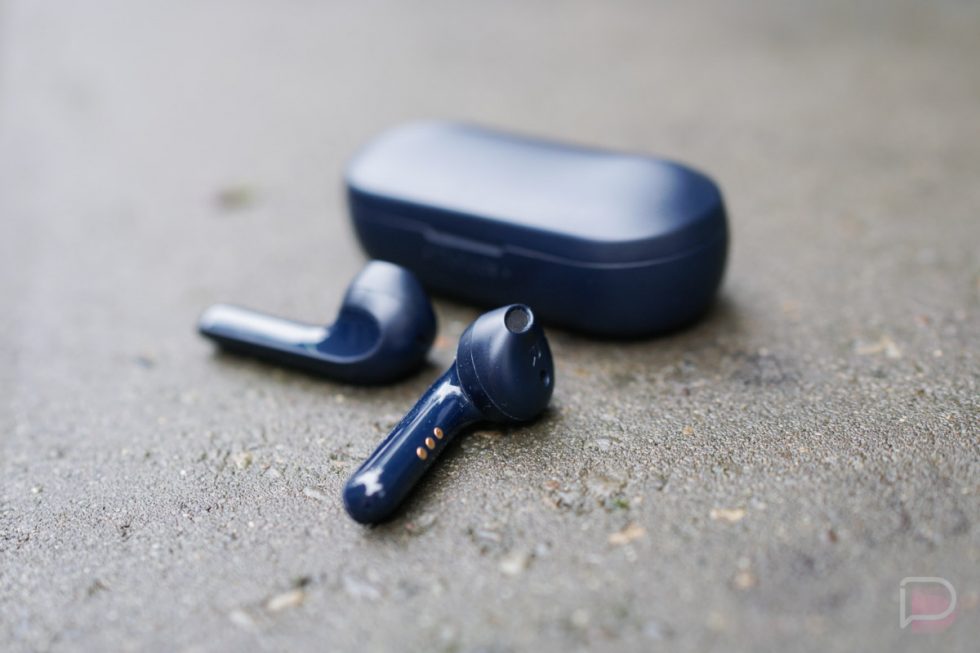 The true wireless earbud market has more options than ever, many of which fall into the “just fine” category and aren’t something you’d want to pay more than $50 for. The original TicPods Free, which retailed for far more than that, fell in that category for me after ordering an original pair at a steep discount from an Indiegogo campaign that Mobvoi hosted. Fast forward almost two years to today, where the TicPods 2 and TicPods 2 Pro are here as replacements, and my opinion of Mobvoi as a quality earbud maker has changed.

I like the TicPods 2 Pro quite a bit. I’ll say that much. The company sent me a pair a few weeks ago to review and I’ve used them during workouts, runs, on airplanes, and while walking around the show floor at CES. During all situations, outside of one airplane ride, they impressed.

To recap, the TicPods 2 ($99) and TicPods 2 Pro ($139) were announced at CES a week or so ago with quite a few upgrades over those old TicPods Free. Since I didn’t spend any time with the regular TicPods 2 I can’t share much there, so for the rest of this write-up, we’ll focus on the TicPods 2 Pro, which I have had in-ear for hours. 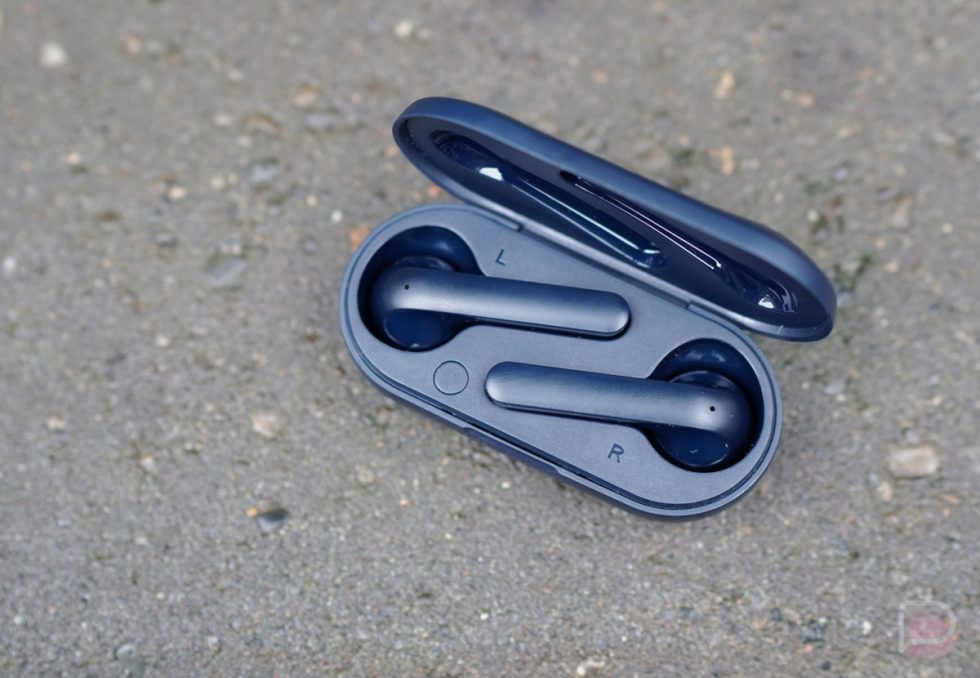 The TicPods 2 Pro come in three colors (blue, white, and pink), have touch controls (including volume adjustment) on a very AirPod-esque bud design, dual-mic noise cancellation, Qualcomm aptX, quick pairing, in-ear detection, Bluetooth 5.0, IPX4 dust and water resistance, fast charging, a case that provides up to 20 hours of use, and some other AI-ish uses. If you are looking for earbud specs, I think it’s safe to say that these TicPods 2 Pro have what you need. 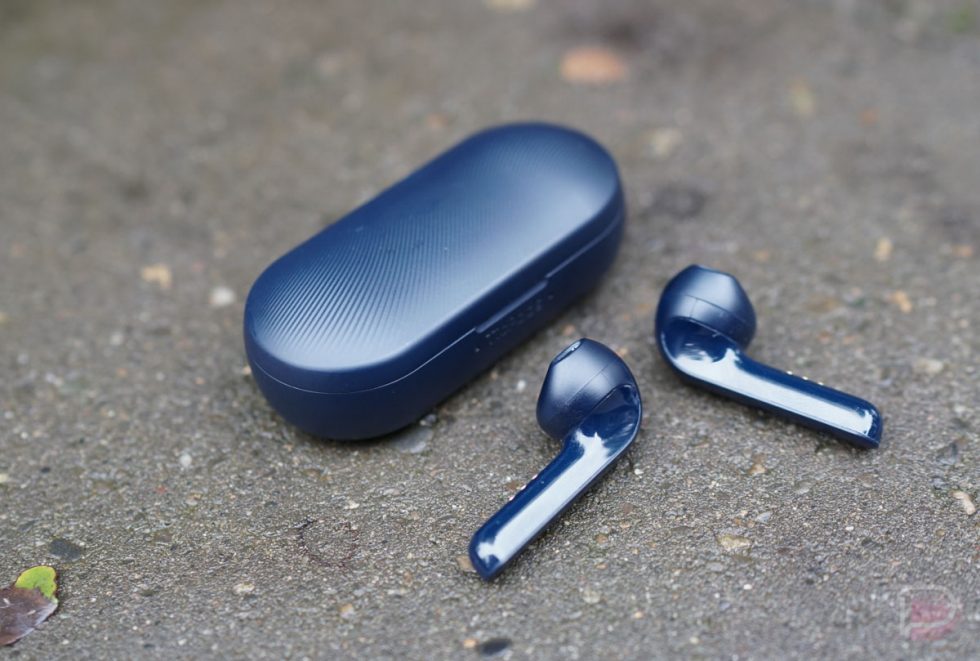 The design of the TicPods 2 Pro is (again) going to be familiar. This is that one-size-fits-all approach that Apple has had with EarPods and AirPods, where you get an ear-shaped plastic design that either fits you or it doesn’t. In the box, there are no rubber tips or wings that can secure the fit of these and I think that may turn some people off.

For me, I’m the guy who used EarPods for years with Android phones because they fit my ears perfectly. These TicPods 2 Pro don’t have that same perfect fit (I think they are ever-so-slightly larger), but they do fit nicely and haven’t fallen out during workouts or runs. For me, these are the types of earbuds I’ve been waiting to get in my ears again without having to buy AirPods.

For those who like custom fits from tips and wings, these may not be for you, especially because those are the earbud additions that really help you create a seal and lock in sound. If the TicPods 2 Pro don’t fit out of the box or you find yourself constantly squishing them deeper in your ear to get better sound performance, I’m afraid looking elsewhere is going to be your best option. 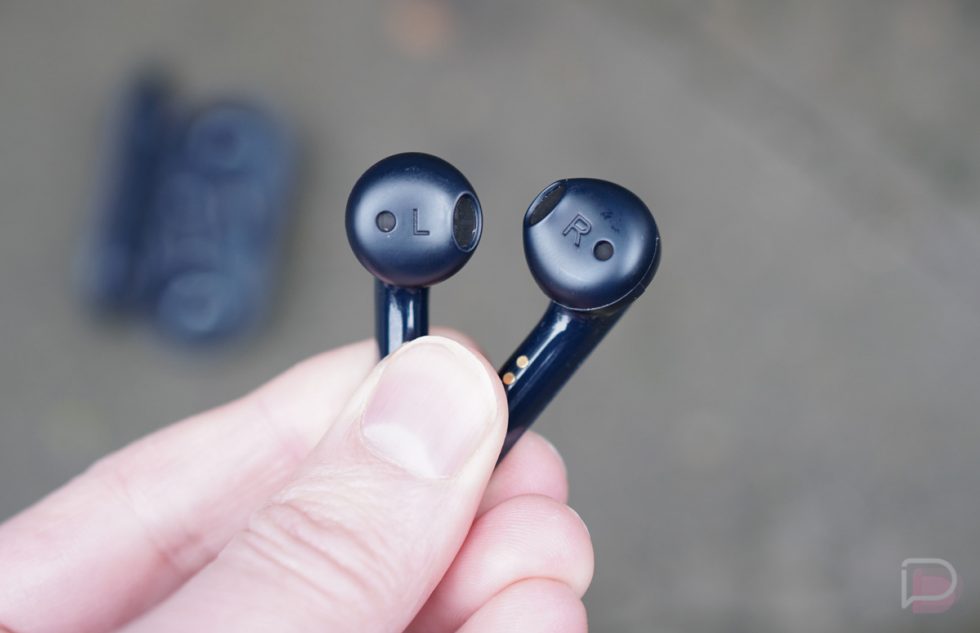 The set of features that Mobvoi included here is quite impressive, though. The Mobvoi app lets you adjust things like automatic in-ear playback, whether you want aptX HD audio on or not (you do), what action should be performed with a double tap, whether or not you want AI controls active, and if you’d like to be able to fire up your phone’s assistant with a special “Hey Tico” command. The app also lets you rename your buds, check battery percentage of each bud as well as the case, and update software (I’ve received two updates since I’ve had the pair).

Pairing is also pretty simple through the app. Some earbuds like this can be a bit confusing and involve opening and closing of a case, but Mobvoi tossed a pairing button onto the case that lets you initialize pairing. I can’t tell you how much I appreciate this feature as someone who uses lots of different devices.

Speaking of the case, while it does charge the buds quickly, adds hours and hours of extra use, and lets you easily drop the buds in without much effort, it’s super cheap. The plastic used feels like something you’d get from a $50 pair of buds, the lid refuses to stay open, and the lid is actually kind of a pain in the ass to open. Hey, at least it charges via USB-C. 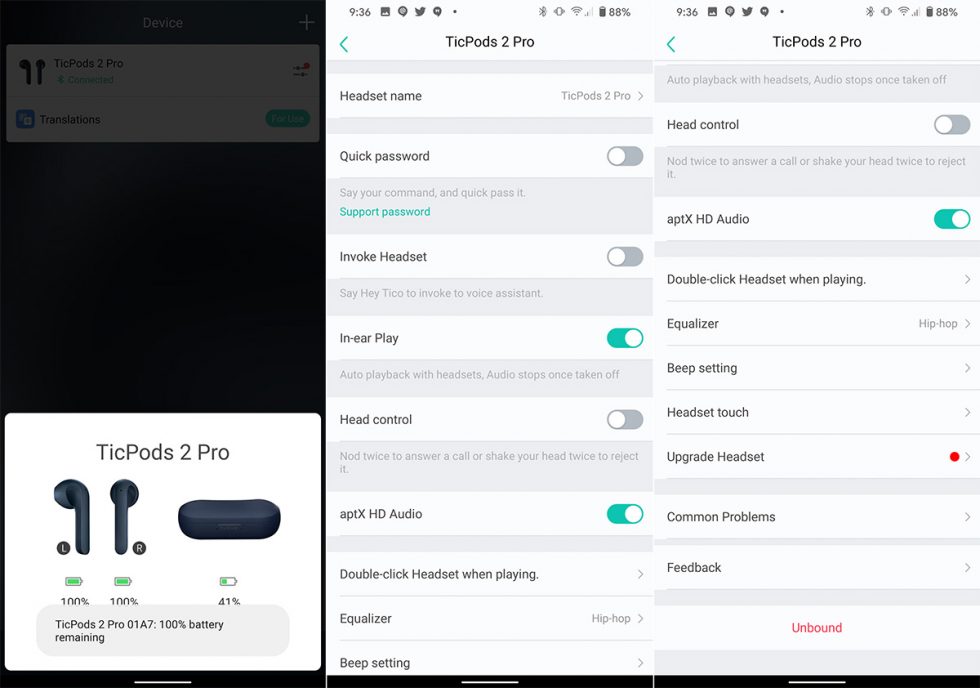 On a battery life front, rarely do I listen to earbuds long enough to kill them. For the TicPods 2 Pro, I listen to them in 30-60 minute bursts mostly, so the 4-hour estimated life from Mobvoi never really came into play. With that said, on my flight back from CES (Vegas to Portland), I managed to fully drain them to the point where they shut off. That’s a 2-hour flight. On the way to Vegas, they didn’t die, though, so I’m wondering if the software update I received prior to leaving introduced some sort of bug. Otherwise, using them off and on during these past few weeks, I’ve had to charge the case only a couple of times.

As an example of correct battery use, I’ve been sitting here writing this and I tossed the TicPods 2 Pro in and am down to 65% after an 1.5 hours or so. I’m probably going to get close to the 4 hours if I leave them in and on. I know my usage is different from those of you who commute to work or sit a desk with earbuds in, but I’ve mostly seen acceptable battery life. Plus, you really can toss them back in the case for 5 minutes and get a good amount of juice back.

Are these the battery kings? Probably not, but they’ll be fine for most people. 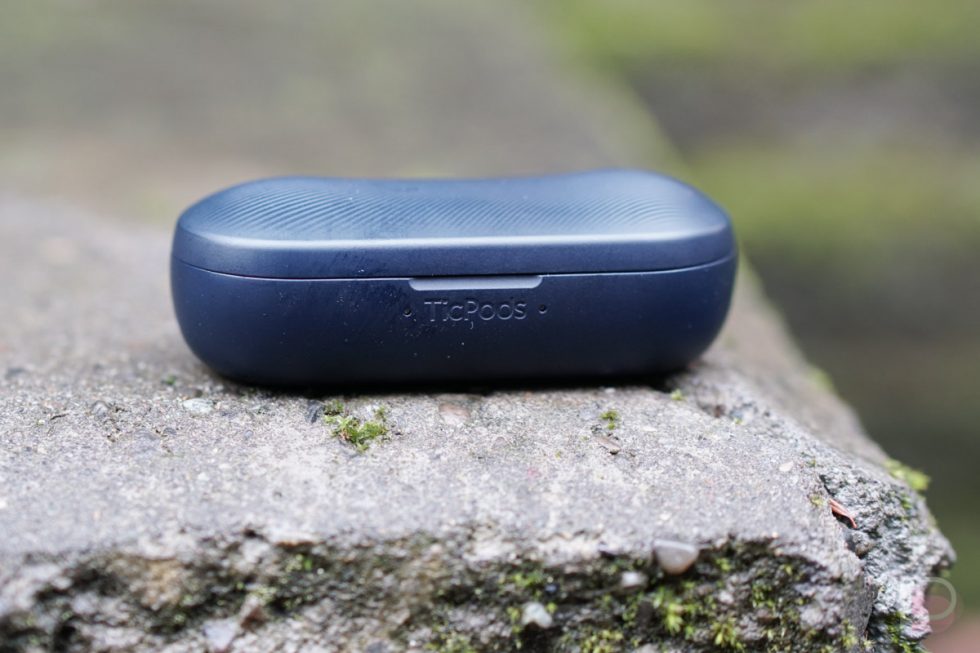 One area I do want to point out are the AI features that Mobvoi calls TicHear and TicMotion. TicHear is a set of quick commands you can use at any time without using a wake word to do things like change or pause/play music or answer/hang-up calls. Mobvoi also included a “Hey Tico” assistant activation command for some reason, but it rarely works. In fact, all of those included voice commands rarely work for me and I’ve found that I refuse to shout at earbuds when I can just as easily tap on them to do those similar tasks. For assistant stuff, I just used the regular “Hey Google” command without issue.

For TicMotion, Mobvoi lets you nod your head to answer incoming calls or shake it to ignore them. Just being honest here, but I get like 2 calls a day and have no idea if these motions work. Sorry.

Again, I mostly used the double-tap function on each bud to play/pause music, slide up or down each to adjust volume, or press and hold to get Assistant up and ask for a next song. 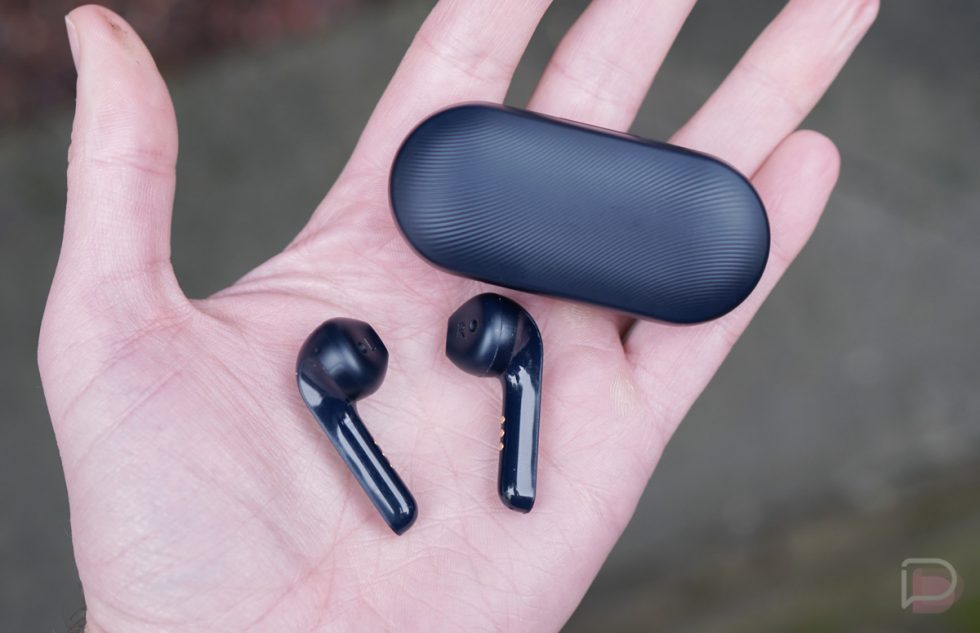 With Qualcomm aptX HD turned on, I quite enjoyed the audio experience here. You’ll find decent-enough bass in hip hop modes that might surprise you for a pair of wireless earbuds. I found crispy clean mids and vocals, so much so that I picked up a few surprises from live Gary Clark Jr. tracks I’d listened to hundreds of times and never noticed.

My music needs are filled with hip hop (lots of Travis Scott at the moment), R&B (The Weeknd), and bluesy rock (Teskey Brothers!). I thought these buds presented all of them well. I’m not sure I’d call this the most immersive listening experience ever, but I certainly didn’t get weak, flat, or tinny sound.

I’m not an audio expert, guys, I’m just telling you that as someone who has run through a fair share of true wireless earbuds, I’d put these up there with the Galaxy Buds. They are quite different, though. The Galaxy Buds really tuck into your ear and can be sealed, while the TicPods 2 Pro can’t give you that same experience. They still sound great, don’t leave you feeling like your ears are plugged, and almost disappear as you wear them because of their weight. So they are different, but as good, if that makes sense.

On a related note, the original TicPods Free were far too quiet for me, even at high or max volumes, yet these 2 Pro buds get plenty loud. Volume was not an issue this time around.

Should you consider the TicPods 2 Pro? At $140, they certainly aren’t on the cheaper end of the wireless bud arena. I tend to think they are a really good choice to add to your list, alongside the Galaxy Buds ($130) and the upcoming Google Pixel Buds ($180). Mobvoi likes to run various sales throughout the year too, so don’t be surprised if you can find them lower than their $130 launch price.

I’m certainly going to keep using these alongside my Galaxy Buds.