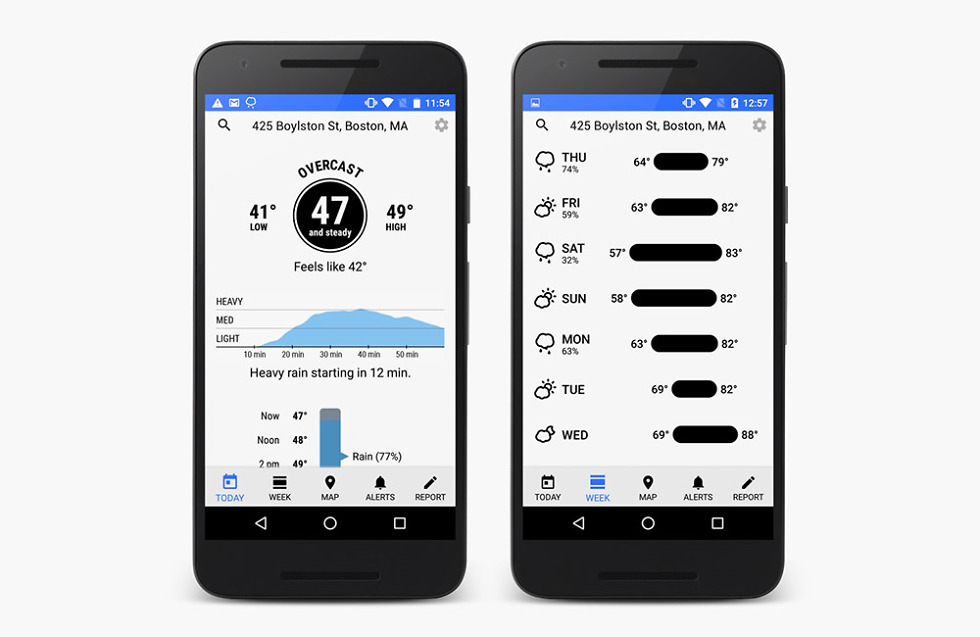 Dark Sky launched on Android this week to the delight of weather obsessed former iOS users who made their way to the intelligent side of mobile. While the app isn’t exactly a beacon of Material Design newness, it’s very much like its Apple-originated counterpart and should be familiar to fans. With that said, the pricing model isn’t like it is on iOS and is rubbing Android users the wrong way.

The weather app, like the popular iOS version, includes down-to-the-minute “hyperlocal” rain forecasts, the advanced notifications, and “accurate” 24-hour and 7-day forecasts. It has the beautiful maps too. It’s very much built to be like the iOS version, only now for Android too, which the team behind it says has always been the number one request. Oh, there are widgets as well, because this is Android, dammit, and we love widgets.

So what’s up with the pricing that is irritating our Android brethren? On iOS, you can buy Dark Sky with a one-time payment of $3.99. That payment gets you full access to the app, with those timely notifications and the other benefits that make Dark Sky such a good app. On Android, Dark Sky has decided to conduct an “experiment.” Mmmm, experiments almost always mean something you won’t like, right?

The experiment is to offer a free version of Dark Sky that acts like a standard weather app you could download in 100 different places from 100 different developers. To unlock the good features (like the notifications, alerts, minute-by-minute forecasts, and widgets), you’ll need to pay a yearly $2.99 subscription. See the problem here for Android users?

According to the early reviews of Dark Sky, people aren’t exactly happy about having to keep paying $2.99 per year for access to the same app and services that iOS users get to pay a one-time $3.99 fee for. Seriously, go take a look at the reviews. As of right now, 1-star reviews are dominating the listing and almost all reference the pricing model or “experiment.” 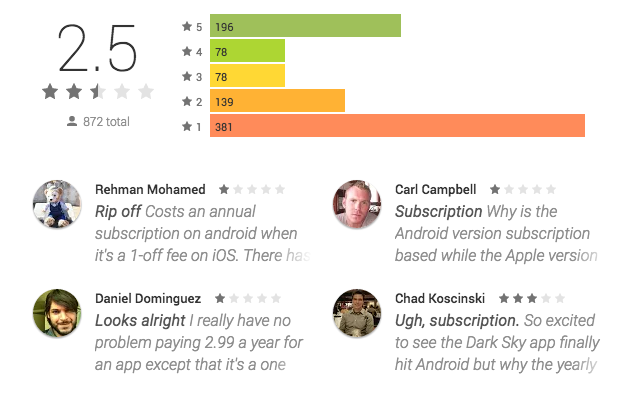 Of course, I have some thoughts on this idea. In Dark Sky’s blog post to announce the arrival on Android, they make mention of finally being able to create an Android app because they grew their resources to the point where they can do it “right” and also continue to support it going forward. In other words, this is probably a small outfit who doesn’t have a couple of hundred million in the bank and 100 employees to make their weather app always awesome. In order to survive and continue to support both iOS and Android, and add new features, getting paid going forward on a continual basis is probably crucial.

Now, I know that people hate this idea of having to continually pay for something when we have all been trained to pay for apps once, own them for life, and expect forever and ever support and new features. Honestly, that may not be fair or sustainable to a lot of developers. You may recall Action Launcher creator Chris Lacy charging everyone again for Action Launcher 3 and people freaking out a bit. He stood by his decision because like many of you, the dude needs to feed his family and providing a lifetime worth of updates and new features on an app that isn’t producing new money is probably not a reality.

Does it suck that the Android app is different from the iOS version in terms of how you pay for it? Yeah, I get that. But maybe we all need to think about how our favorite apps can continue to receive support and the idea that a one-off payment isn’t going to cut in any longer. I don’t know the company structure or size of Dark Sky, so this isn’t me sticking up for their “experiment,” this is just a conversation over all paid apps that we probably need to start talking about.

And now my morning chat with myself is over, feel free to check out Dark Sky.