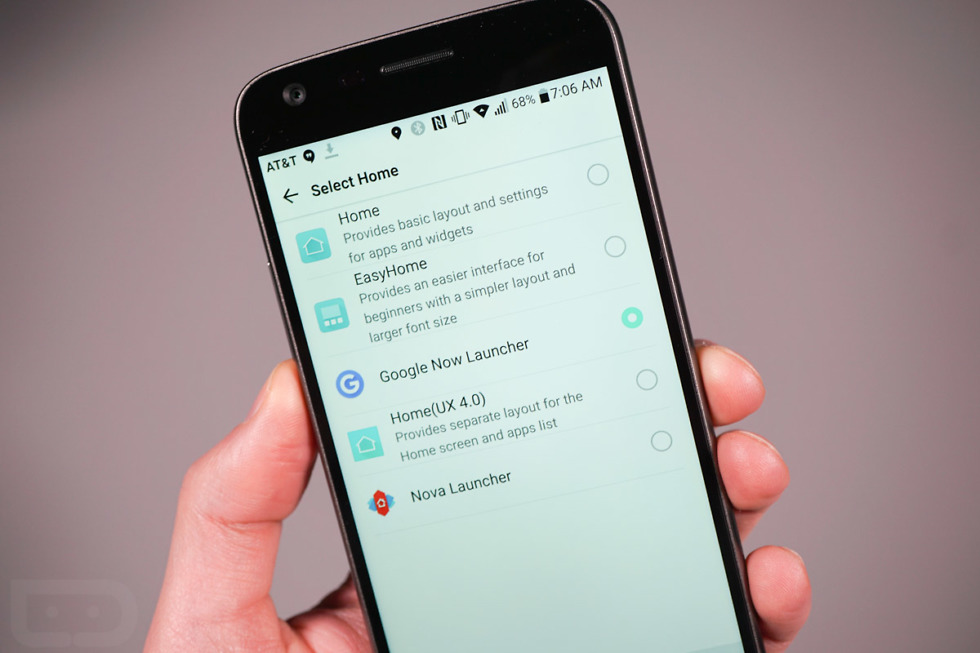 The LG G5 doesn’t have a home launcher with an app drawer and it’s kind of a big deal, for some. Kind of. An Android phone without an app drawer, in a way, is a phone without a soul since the app drawer has been a standard on Android from day 1. Taking the app drawer away is like taking the bench away from a basketball team and forcing everyone to stand in whatever arrangement they happen to fall into on the side of the court (or on it, in this case), throughout the stands and maybe into the concourse. Could your team survive without one? Yeah, probably. But is life a hell of a lot easier and simpler, if everyone can sit down, off to the side, in the order you choose, in an easily accessible manner, so that the court and playing surface is there for all of the action to take place? Yep.

[In case you aren’t a fan of basketball and missed that whole deal, I’m talking about the bench as your app drawer, where you can select players (apps) to put in play, something that would be much easier to do if they were tucked off to the side in an app drawer, in the order you have chosen. The court then becomes your home screen setup, with moving pieces (widgets), the apps you use frequently (like the starting 5), etc. Get it?]

And look, LG says that we should expect the launcher to return in LG UX 5.0 for the G5, but that hasn’t exactly happened yet. We are expecting some sort of update at some point to bring it, only it hasn’t arrived. In a video detailing UX 5.0 that showed up just before launch (April 1), LG made a point to show the world that they had listened and were bringing the option back, for those who hate an app jukebox experience. The option is supposed to be in Home settings under an option called “Home & app drawer,” only it isn’t there on any retail unit as of today.

If for some reason, you want to use an LG launcher with an app drawer today, you can download the UX 4.0 launcher from LG SmartWorld, which is their 3rd party app store, like Samsung’s Galaxy Apps. It’ll get you an app drawer, with horizontal scrolling experience and a couple of other features not found in the app drawer-less experience on the G5 out of the box. Again, that’s if you are the type of person who likes pain, a hell of a lot of software pain, and must use an LG home launcher.

YOU SHOULD JUST DOWNLOAD A 3RD PARTY HOME LAUNCHER.

Why? Because there are so many damn options out there, all of which are better than whatever LG will cook up or let you install from their app store on your G5. Honestly, I don’t know why you would want an LG launcher when there are app developers out here who specialize in making launchers – the best launchers, that have stood the test of time, continuously get better, and have app drawers. Or maybe you don’t want an app drawer! Funny, most of these launchers will let you take that away too, except they aren’t terrible like LG’s app drawer-less experience, in that you can organize your hundred+ apps in less than three hours.

Need some suggestions? Hey, good, because we have some!

Over the weekend, we have seen a handful of emails come through our inbox with disappointment over the fact that there isn’t an app drawer on the G5. People are even taking the G5 back in favor of the Galaxy S7 because of it. That’s kind of nuts! Taking a phone back over an app drawer, when you can download one for free in like 2 minutes!

Folks, this is Android, and part of what makes it so great is that you can make your phone yours without spending a dime and without the permission of the manufacturer. I’m not going to tell you to stop complaining about LG’s decision to ditch the app drawer, because it’s a bad one, but let’s not get too wild with this one. This is a problem you should have fixed anyway, even if they had included an app drawer.