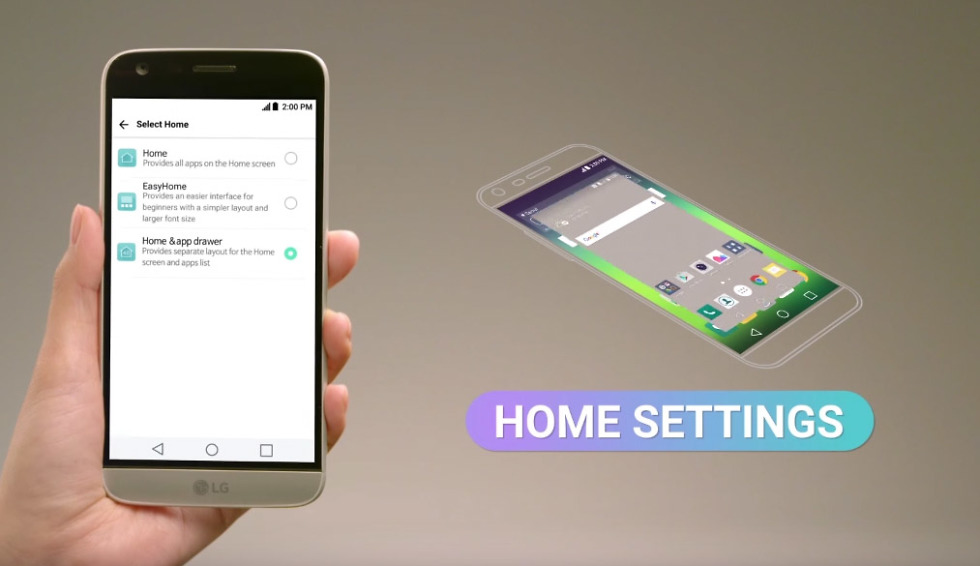 Over the weekend, LG sent out a press release detailing the UX 5.0 experience that users will see when the G5 launches this Friday. The list of changes, along with an accompanying video, talk about the experience being “more playful and innovative,” making it easier to keep track of your “Friends,” which is what LG calls anything you pair to the G5 over Bluetooth. The new UX also adds new camera features and a “refined” skin to “enhance usability and convenience.”

The video below details every single new change, most of which are options that you would only use in special situations that aren’t necessarily headline grabbers. Feel free to take a look.

There is one change, though, that is particularly of interest to those of us who are Android purists. You’ll notice that LG points out specifically that the default home screen experience is one without an app drawer, but that an option with the standard app drawer is only a couple of settings away. That’s right, LG heard the cries over the lack of an app drawer and has added the option in UX 5.0.

You have probably seen the poor reporting over recent weeks, which suggests that the LG G5 has an app drawer that is hidden or readily available in a settings menu. The fact is, that LG, up until this video was released, killed the app drawer unless you were willing to use their ridiculously degraded EasyHome launcher experience. Yes, other outlets are trying to tell you that you should just switch to EasyHome to get the app drawer, but that’s actually not a good solution. I’ve explained it here to all of those out there who don’t actually understand what EasyHome means and continually take to comments to tell us to “do some research” on the subject, but the basics are this. EasyHome is just that, an easy home option without any of the actual options (like Widgets, for one) or customizations that anyone complaining about an app drawer-less experience would want.

So yeah, LG heard us and they are bringing back the app drawer. That’s a pretty quick turn-around on their part. The phone isn’t even out yet and they are backing away from a pretty major decision to appease the loud Android purist crowd. Good on them.