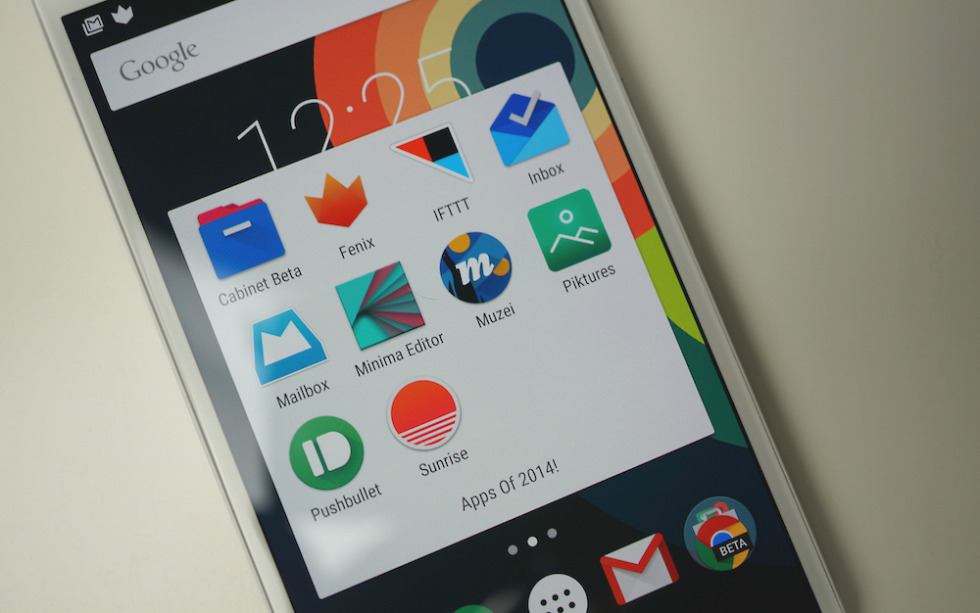 2014 was a special year for apps on Android. Not only did we see a ton of fantastic applications released by developers, but Google also got in on the fun, re-releasing almost its entire app suite with updated interfaces, thanks to the launch of Material Design.

Honestly, Google should have a few spots on this list thanks to the changes made, but we didn’t feel that application updates warranted a spot on the Top 10, so instead, we focused primarily on apps that were released within the 2014 calendar year.

Even though you won’t see Google’s app updates on this list, there is no way we were leaving off Inbox. As the calls for a more modern email app were going unanswered, the Gmail team at Google decided to release Inbox, a sexy email client which brings your most important needs right to the top of your inbox.

What made this app so successful, at least in my eyes, is the invite-only route they took for release. To make more people desire it, make it an exclusive club. Thankfully, the app was actually worth the trouble of trying to snag an invite. However, with the lack of support for Google Apps account, business owners and employees still can’t use the service, but Google states that they are working on it.

If you still have yet to try out Inbox, stop what you are doing and go grab it from Google Play.

2014 saw the release of a few great calendar applications, but there was one which the DL team was using the most – Sunrise Calendar. With Sunrise, users can check their schedules and daily to-dos, but what makes Sunrise special is the social integration aspect, as well as the integration of Google’s own Maps and Calendar services. After creating an event, you can use Google to mark a specific location on a map for others to find you, and then invite friends to the event using Sunrise’s built-in friend finder.

Not only is the usability great, but the look and smoothness of Sunrise is unmatched. Did I mention it is free to use, too? Go check it out.

Who does not need a good file manager for their Android device? With a plethora of them available on Google Play, we choose the Cabinet app to give us a clean and user-friendly interface, providing us with plenty of options for sharing, copying, and saving data wherever we may need it. Cabinet also supports rooted users, as well as bringing Google’s Material Design aesthetics to the forefront. Given that the application is still young, we have very high hopes for the future of Cabinet.

Not too long ago, Kellen and I both stumbled upon Minima Pro Live Wallpaper. Given our fondness of live wallpapers, we both quickly came to admire its customization options and vast user settings. It has a very Materialistic vibe, with lines and soft edges, as well as hovering shapes. Users can customize the shapes and even change the colors, making it perfect for any users who has a particular mood they are trying to set on their smartphone. And for those concerned about battery life, neither of us discovered a drastic change on our phones, so you need not worry about that.

If live wallpapers are your thing, then you best get on it.

Keeping up with the Material Design theme, Piktures is a gallery application which should replace your phone’s current gallery app. In Piktures, everything is laid out in an easy-to-browse layout, but with swipes and gestures, looking through photos and videos has never been so sexy.

Piktures features everything you would need in your basic gallery application, such as sharing to social networks and emailing, but with the updated user interface, it is easily one of the more pretty gallery apps on the market.

Note: The below video is not in English.

As for third party Twitter applications, you all may know what a large offering there is over on Google Play. However, it takes a very good application to stand out in a crowd, and luckily for Android users, Fenix is the app which does it.

Bringing you all of your basic Twitter needs, such as lists and Mention notifications, Fenix features a real-time update mode, allowing you to be updated with the newest tweets from your favorite users the instant they are posted up. For someone who follows accounts like an addiction, given the time-sensitive material of the tweets, then there is no better option that I have found for Android. Plus, MKBHD loves it. That must count for something.

Fenix runs nearly $5 in Google Play, but for the quality of this app, it’s worth the Lincoln.

Before Inbox came and swept everyone off their feet, Mailbox was the email client on Android to beat. Not only was it awesome, but it also allows for users to sync their Google Apps account, making it even a bit better than Inbox in that regard. However, Mailbox is popular because of its features and minimal design. With the app, users can quickly get through their entire Inbox, quickly swiping away and dismissing unnecessary emails, which ultimately helps you feel less cluttered and more organized. Mailbox also offers desktop and iOS clients, meaning that no matter what machine you are running, whether it on top of your desk or in your pocket, Mailbox is there for you.

Mailbox, along with its services, is free to use from Google Play.

If This Then That, otherwise known as IFTTT, launched onto Android earlier this year, bringing with it a storm of automated features which help users spend less time completing tasks. It works quite easily, but seems so complex that you would never imagine it being real.

For example, a user creates a recipe for IFTTT – this recipe can consist of 3rd-party services such as Facebook or Twitter. The recipe states that if I call 911 from my cellphone, the phone will automatically send out a text to one of my emergency contacts as well, saving me the time from doing so. Neat, right? On a lighter note, users could also make a recipe which would allow your Philip Hue lights to blink a certain shade depending on which application a notification just popped up for. Now that, my friends, is cool.

IFTTT is free to download from Google Play, and to use.

Googler Roman Nurik is one of my favorite developers. He has given us DashClock, and my most favorite of his works, Muzei. Muzei is a live wallpaper, but not in the usual sense that you would think for a live wallpaper. Instead of spinning planets and streaming lines, Muzei is a curated art gallery of sorts, bringing a few of the most classic art pieces ever created right to your smartphone.

Making it interesting is the shading effect which is applied to each piece. When a user double taps on the home screen, the artwork is revealed, but then shaded again after a short period of time. This shading also helps bring other elements of your homescreen to the forefront, such as widgets and icons.

If you enjoy fine artwork, as well as enjoy live wallpapers, Muzei was made for you.

While Pushbullet was technically launched in late 2013, the app really blossomed into something special in 2014. Thanks to an abundance of updates, users were introduced to a gang of new features for pushing information between synced devices, making the service more valuable as the year went on.

With a Pushbullet account, you can send information through the cloud to whichever device you may own, allowing you to truly multitask like never before. You can also receive the latest Android news from DL as soon as we post an article thanks to Pushbullet’s channels, making it insanely resourceful.

Pushbullet is free to download and to set up. Give it a try if you have not already.

If you had to create your very own Top 10 list of Android apps for 2014, how would it look?