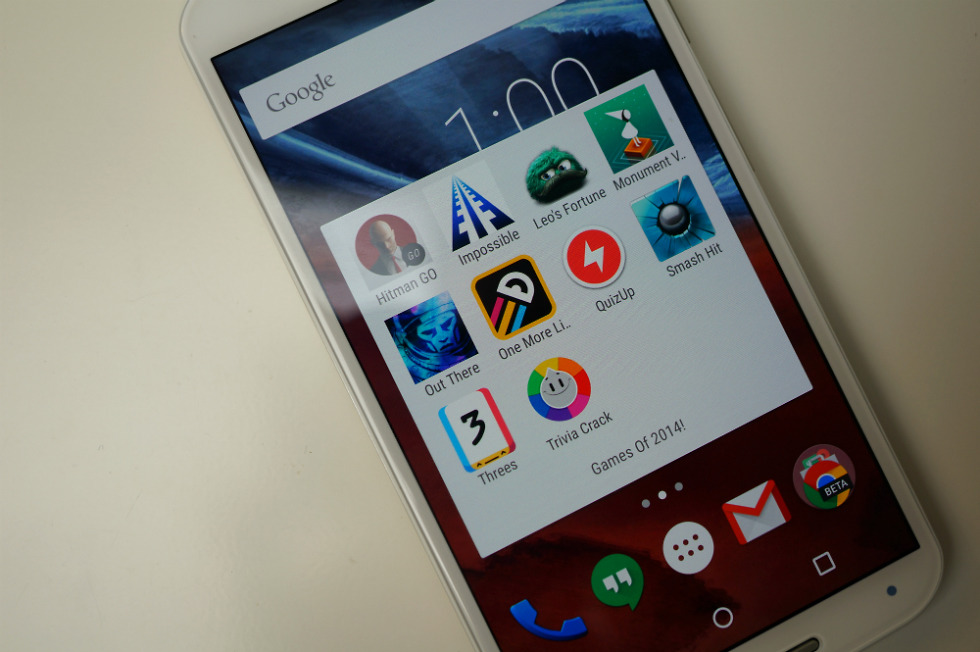 It is that time of year, where we start rounding up our top 10/favorite everything of the past year. In this post, we want to reflect back on the fantastic year that was 2014 in the games category. We saw a ton of epic titles released for Android onto Google Play this year, so narrowing it down to just 10 was quite difficult. As you will notice, our honorable mentions section is almost as long.

When boiled down, many of these lists are very subjective. Personally, I enjoy more quick death games, where I can just keep smashing buttons until I die, only to try again. However, I also enjoy puzzle games, trivia games, and platformers. Since I am not an RPG player, you won’t see many on the list, but that does not mean there were not a few great RPGs released in 2014. I only bring this up because I hope not everyone here will share the same interests as me. If you think this list sucks, tell us what should have been there in the comments below. I’m always open to trying new games.

Ready to see what had the DL staff occupied all year long? Check out our Top 10 Android Games of 2014 below.

Thanks to Ron’s recommendation on The Droid Life Show, I found One More Line, and instantly fell in love. The game features very quick gameplay, as well as a soundtrack that will have you humming along in no time. The goal is to sling your way as far as you can, but don’t worry if you don’t get too far at first. The game features a fantastic learning curve, but once you break your first 100 run, you will feel like a God among men.

Last year, I specifically remember the first Dots game consuming the DL staff’s lives. Thankfully, the same makers came back this year with TwoDots, a worthy followup to last year’s great success. In this game, the creators introduced more of a story mode, instead of just a random get as many points as you can objective. In TwoDots, you follow along a set path with its own objectives, in an attempt to complete each one before moving on to additional worlds. It is a great game, so go check it out.

For those who enjoy flexing their brains, QuizUp was probably your favorite release of 2014. In this title, you go up against realtime opponents in a battle of category knowledge. For example, you could challenge me to a quiz based purely on Android or Family Guy questions, but I would not bet on winning that. Each question has a timer set alongside it, and the first person to answer the most questions right, while also being fast about it, wins the match. QuizUp may go down as one of those viral games that never dies, so if you have not already, get yourself signed up.

Shown off this year at Google I/O, when Leo’s Fortune hit Google Play, platform gamers rejoiced. In the game, you take control of a puff ball character with an amazing voice, as he searches through a dangerous world to find his missing treasure. The game features perfect controls and stunning physics, good enough to be on any person’s Top 10 list for 2014.

If you need a game that you and your significant other can go back and forth on, I recommend Trivia Crack. My girlfriend and I have been playing this for months, and it does not seem to get old, as we challenge each other to mental showdowns of questions based on categories. Much like QuizUp, each of you must answer questions, but in Trivia Crack, you never get the same question. Each player receives a different question, with 30 seconds to answer it. If you answer three questions correctly in a row, you can attempt to get a character. The first player with six characters (Entertainment, History, Science, Sports, Art, Geography) under their belt, wins. To put it more simply, think of it like Trivial Pursuit. Definitely a must have for 2014.

To be totally honest, at first, I was not looking forward to this game. I never played the games on PlayStation back in the day, but I finally gave Hitman GO a whirl one day when it was on sale, falling in love with it shortly there after. While I thought it looked too simple and childish from the trailer, I quickly found out that the gameplay is sometimes very challenging, but it has its rewards. On top of cool graphics and smooth gameplay, Hitman GO also features a great soundtrack, one which I even found on All Access to listen to whenever I wanted to. If you are already a fan of Hitman, or if my word on games is worth anything to you, then give it a try.

Monument Valley was one of the easy picks for this list. It features gorgeous levels, smooth gameplay, and it is set in a world that you wish you could travel to. In Monument Valley, you play as a princess who is on a journey, trying to solve puzzles in a world that looks like something out of Jim Henson’s Labyrinth. Side note: That movie kicks butt. Now, back to Monument Valley. Each level is a puzzle that must be tweaked until you can get your princess to the end. To me, it is based primarily on one’s perspective of any given puzzle, so try to think outside of the box if you find yourself stuck on one particular level.

While many folks may find themselves playing this game’s copycat cousin called 2048, I much prefer the original game, Threes! In this game, you combine numbers of equal value, attempting to get as high as possible without running out of slots to place more numbers. Confusing at first, you should be able to quickly master this game’s fundamentals, ultimately getting a super high score. It is simplistic, easy to look at, and can lead to a ton of fun while you are bored on a flight or bus ride.

Another game I knew I would have to include on this list is Out There. From what I have seen, many people don’t like this game, only because you die a lot. And I mean, a lot. Sometimes you do good, and sometimes you fail miserably. But that’s what makes the game great. You take what you learn from previous runs and apply that information to new games, in attempt to get your spaceman back home to Earth. To start, you find yourself lost in space, but thankfully, you have fuel, oxygen, and a working ship. However, as you search nearby planets and star systems, you find out that space is not a peaceful place, and many things out there can destroy you or leave you stranded forever. As I mentioned, yes, you will die a lot. But go into the game knowing that, and prepare to take notes. It may sound crazy, but you may have to learn an alien language just to beat it. In the end, though, it’s so worth it.

Produced by Mediocre, Smash Hit is a fabulous viral shooter game, placing you in a world of glass with steel balls. You shoot the balls to hit pyramids of glass, boosting your score and also giving you more balls to shoot. As you enter new stages, you must perfectly aim your balls to hit targets, opening the doors and avoiding objects. The gameplay is great and the music is even better. Definitely check out Smash Hit. It’s a smash hit.

Another viral game to hit Google Play this year was Impossible Road. In this title, you control a ball as it rolls down a insanely windy road. Your goal is to get as far as possible down the road without falling off. At first, you will think it is impossible. Don’t worry, that’s the point. Give the game some time and you will find yourself twisting and turning your way down that road like a pro. If you master the jump off, then you will get some crazy high scores in this game. But don’t jump off too far!

I have personally spent a ton of my time playing each of these games, and I highly recommend all of them. If you have not given a few of them a whirl, go for it. You won’t be disappointed.

What are your top games of 2014? Show us your list below in the comments.