Last month, Nike introduced the world to its new fitness band, the FuelBand SE, as a follow-up to its original wearable activity tracker. I was excited at the time even though the story of the original FuelBand in relation to Android users is not a pretty one, to say the least. With the introduction of the newest version and its brand new feature-packed iOS app, I had high hopes of Nike seeing the light or at least recognizing that Android is the most popular and widespread mobile operating system on the planet. Unfortunately, they don’t seem to care because Android manufacturers aren’t Apple. I didn’t make that up, their VP of  Digital Sport actually said that. So once again, there is no Android experience for the Nike FuelBand SE, only a web portal that fails to provide access to any of the new useful features that are included in the iOS app.

But you know what, I still bought the damn thing.

Call me a fool, hypocrite or dumbass, but I do have reasons. You see, I have years invested in Nike’s Nike+ system, my friends all use it, and do not really want to start all over with someone else. I picked up the original FuelBand back in February of 2012, only a month after it was announced, but also while it was impossible to buy thanks to demand. I’m an early adopter, what can I say. As you can imagine almost two years later, I’ve racked up quite the Fuel point balance and am not exactly ready to ditch all of my hard earned work. I’ve amassed over 2 million Fuel points alone, but since I’m a runner, have also added on another couple of hundred thousand thanks to use with a Nike+ watch. Working out with Nike products is simply something I do. 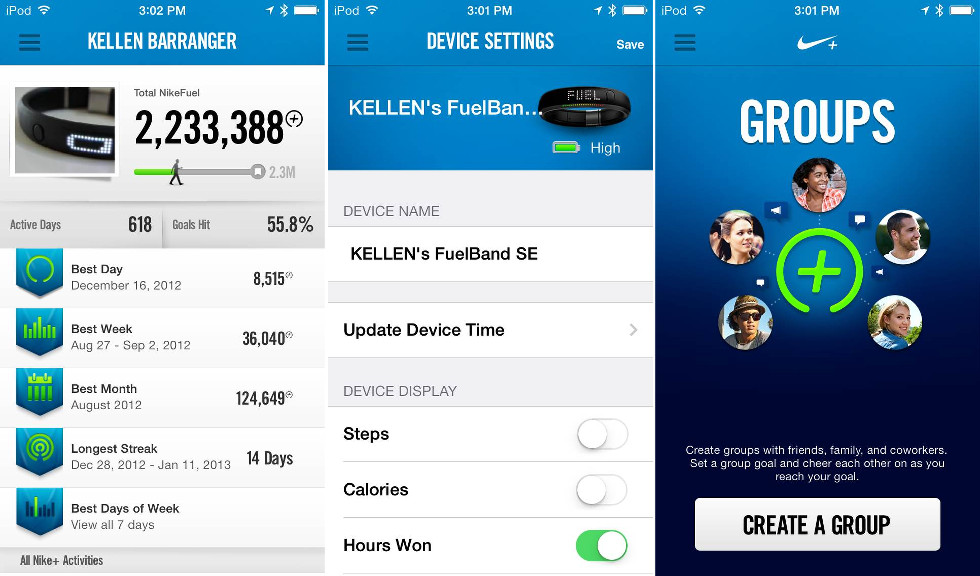 The decision to buy the new FuelBand SE wasn’t an easy one, though. As the pre-orders opened for the new FuelBand SE, I contemplated ditching the whole system altogether for the new Fitbit Force, but then my original FuelBand died out of no where on me before I had made a final decision. I was then left with an immediate choice to make, which ended up being to not give up on Nike+ and either hope for Android compatibility later on, or at least take advantage of the web portal and all of the new features that Nike introduced during the SE’s unveiling.

Thankfully, I also own one of the newest iPod Touch models for testing purposes, so I was able to give this new app a spin, but also see how it compares to that web experience.

And that’s where this post comes in. Outside of some UI tweaks to make it modern, the web portal is exactly the same as it was with the original FuelBand. So while Nike stood on stage bragging about all of the new features in the FuelBand SE, you really can only take advantage of them if you have an iOS device paired to your band. We’re talking all of the new Sessions tracking, creation of groups and interaction with friends, and most importantly, the hourly goals and reminders to get your butt up and moving. 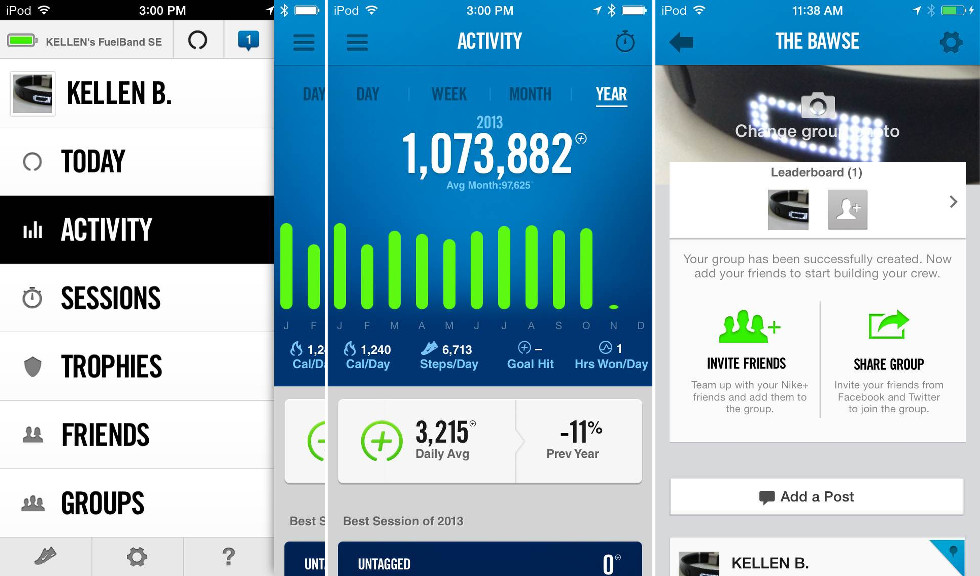 The FuelBand SE when paired with the iOS FuelBand app does some really cool things. Probably the most important for workout junkies is the hourly reminders it can send you on your iOS device to make sure you stay active for at least 5 minutes within that hour. If you hit hourly goals regularly, you are rewarded with trophies and can share them with friends in groups you have created. Well, only if you have the iOS app. Without the iOS app, you can’t create groups, comment on friends’ activities, or share your goals. Well, you can through Twitter and Facebook, but not inside the shiny new Nike+ social network.

And speaking of this new social group feature, it really is locked to the iOS app. There is no way to create a group of friends through the web portal (at least that I can tell from a variety of sessions with it). From within the app, it’s super simple thanks to a “Groups” option in the hamburger menu, along with buttons throughout that will help you establish new groups, add friends, and begin posting activities that include photos. It’s actually a really neat way to challenge friends, see how you stack up, talk trash, and potentially enjoy working out more.

The other big new feature that Nike introduced were Sessions, which are tag-able activities that could be anything from basketball to skateboarding to playing golf to sleeping. They are essentially a breakdown of a “session” or activity you are performing at the time, so that Nike can show you  intensity levels and how many points you earned in a snapshot. Of course, you can also share your results to those groups we previously mentioned. But like the other features, this stuff can only really happen to its fullest while using an iOS device and the companion app. 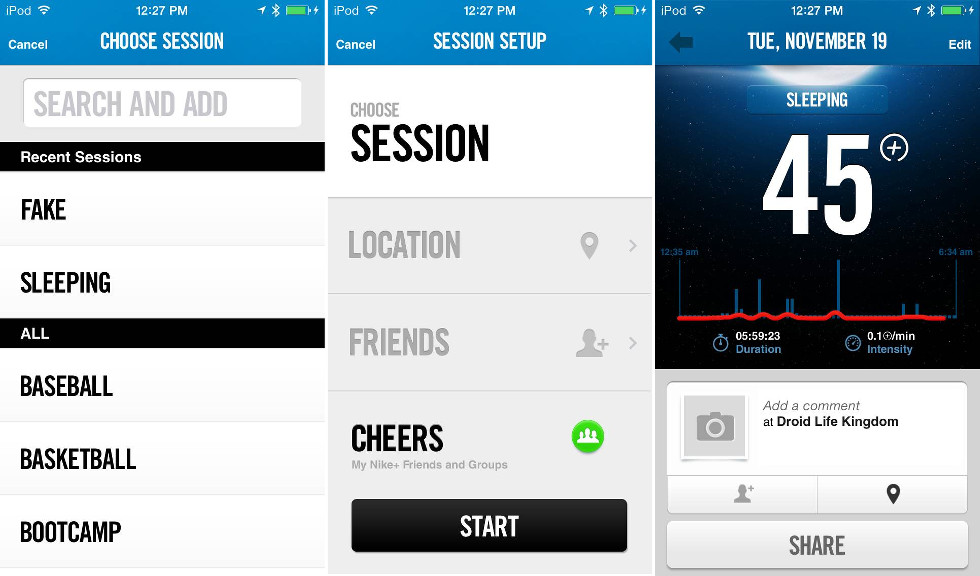 Now, I should point out that there are still ways to track hours won throughout the day, and even initiate a generic Session, but without a companion app like the one on iOS, you have to take off your FuelBand and plug it into a computer to sync any of that information. You would also have to find the Session you started earlier, tag it, and then attempt to share with friends (only through Twitter and Facebook). It’s like a less-than-half-baked experience. Why is it that they can’t bring features from the app over to the web? If you aren’t going to give non-iOS users an app, at least give them something similar to use while you decide whether or not Android  users are worthy.

And I think that’s what drove me to this post. Nike has created this really amazing product (vastly improved over the original FuelBand) for both workout freaks and someone looking to kickstart a healthier life, but yet they are only giving the full experience to a group of users who they seem to think are on this superior level with their brand. I hate to call them completely unattached from reality, but that’s kind of the way it feels. Their reasoning for not giving us an Android experience is partly due to the lack of Bluetooth LE support in Android devices. Look, we get that. We also get the fact that the original FuelBand didn’t use Bluetooth LE (4.0), yet Nike still couldn’t give us an app.

But the other reason, which also strikes us as the #1 reason in their book, is that they have partnered with Apple to create an experience that they deem to be like none other. Nike seems to think that because Apple has a select few handsets, and that “they set the bar high for themselves as well as others,” that iOS is the only platform worthy of a partnership with the FuelBand. That right there, is complete bullsh*t. Forget the fact that smaller companies like Fitbit can create amazing experiences on both platforms, as do countless other app developers with far less resources, but Nike can’t even get their own app right. The new FuelBand app on iOS always feels like it’s struggling to work. I have seen at least a couple of strictly bug fixing updates since launch, slow Bluetooth pairing without much control, and often times a level of frustration that boils over into me ripping the FuelBand off my wrist and plugging it into a computer to get it to sync properly. Maybe the real reason we don’t have an Android app is because Nike sucks as a tech company?

I know that all seems like a lot of wasted breath over a product and company that has turned up its nose as the platform we enjoy, but it needed to get off my chest. I’ve been a massive Nike fan since my childhood days, but this whole idea that you can get a similar experience with their FuelBand without an iOS app continues to rub me the wrong way. Like I said previously, it’s less-than-half-baked, yet if you don’t own an iOS device you are still paying full price for a product that doesn’t include a number of highlighted features. You are also hoping that an Android manufacturer comes along at some point, puts their CEO on the board of Nike, and tries whatever they can to align with the athletic giant’s “values.” Until then, be prepared for life as a second rate FuelBand user.