When Android 4.4 Kit Kat was originally announced 3 weeks back, Motorola confirmed that the Moto X and new DROID family would all see the update fairly quickly. What we weren’t sure about was whether or not last year’s DROID family would see the same joy – that would be the DROID RAZR HD, RAZR MAXX HD, and RAZR M. According to recently updated Motorola update support pages, all three will indeed see the update to Android 4.4. 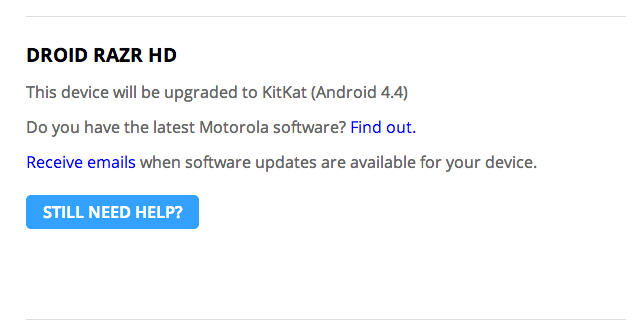 All three pages now say that each device will see Android 4.4. No timeline has been given, but I wouldn’t expect to see it before all Moto X variants have been updated and then the ULTRA, MAXX, and Mini. Once those are free and clear, last year’s phones should be up. That’s speculation on my part, of course. No matter what, this is great news.

Cheers Shelby and Will P!