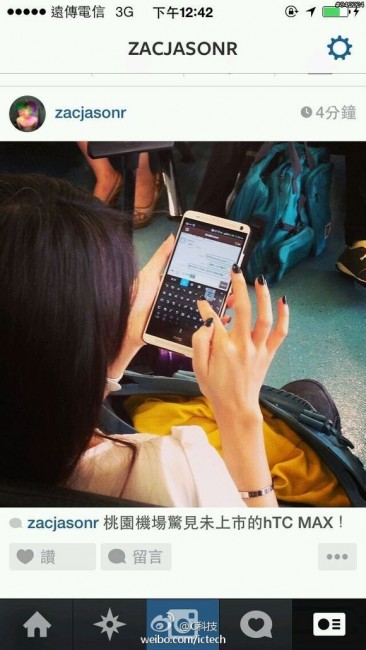 The One Max  from HTC is by no means a small secret. The company has done a terrible job at keeping the newest addition to its One lineup hidden from us, but we won’t exactly knock them for that – we enjoy it. We first heard of this device because of the reported fingerprint scanner that it will feature on the rear, but since then, we have seen numerous peeks at the the 5.9″ device. It may or may not be launching next week, but it seems that at least one Max is already out in the wild.

Packing a 5.9″ 1080 x 1920 screen into any device is going to make it look big, but adding in your BoomSound speakers on the top and bottom make it look huge. Underneath that we are expecting a 1.7GHz Snapdragon 600 and 2GB of RAM to keep everything running smoothly on that large canvas.

The WSJ believes that we could see the One Max get announced as early as next week. If people are already using it like this out in public, that could be a pretty good prediction.