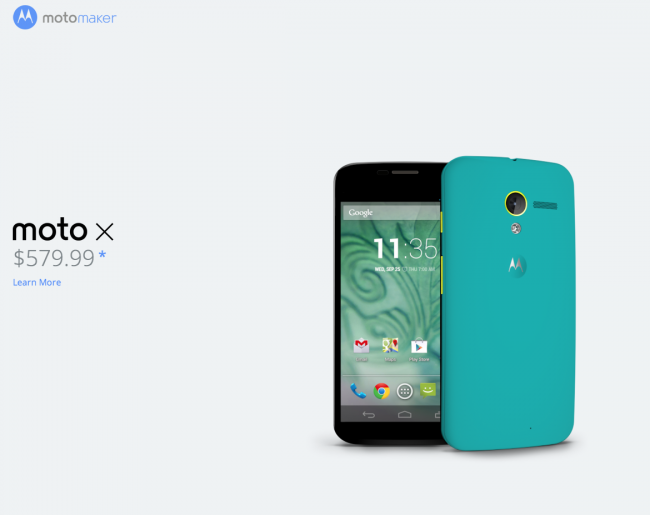 MotoMaker is now open to the public. At the end of last week, Motorola launched the site, but would only allow you to order phones through it had you stopped by an AT&T store to pick-up a prepaid Moto X card. If you wanted to jump on the site and start from scratch without a card, you could only design a phone and save it for later. Today, that’s all gone. If you head to MotoMaker right now, you can customize a phone from step 1 all the way through checkout and then purchase it. No cards needed. You can even purchase the phone at full retail/off-contract pricing, which runs $579 for the 16GB model or $629 for the 32GB version.

As you all know, the 16GB model in black or white launches on Verizon this Thursday. MotoMaker is only available for AT&T customers at this time, but should rollout to other carriers before long.

Keep in mind that developer editions should arrive any day now, so if unlocked bootloaders is all you dream of, you may still want to hold out a bit. Those versions won’t be customizable through MotoMaker, but will feature a one-of-a-kind black/white color scheme.

We should also point out that Motorola had initially promised a 4-day turnaround from design to in-your-hand delivery. They did mention that these times can be adjusted depending on demand, which we are seeing now with MotoMaker showing most customizations in an 8-day window. That time will likely drop once they get things under control. Remember, this is the first time that a smartphone manufacturer has brought assembly to the U.S. and also allowed customers to make specific design choices.