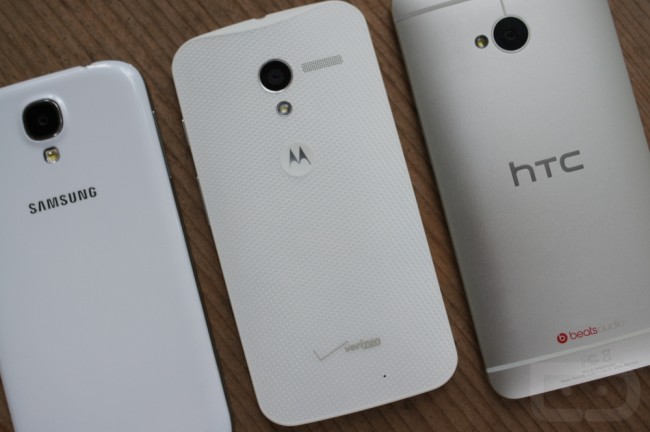 So, we’ve compared the specs of the Moto X to those of the Samsung Galaxy S4 and HTC One, but isn’t the real story here how they differ in terms software and experiences? After all, lists of details on paper never tell the true story of any product, it always comes down to whether or not a product’s set of features helps to make your life easier. At least that’s the way it should be. Motorola, with the Moto X, is trying to do that in as minimal of a way as possible, which is the exact opposite approach to some of its competitors.

With the Moto X, you are looking at a phone that was purposefully left with mostly stock Android, so that users aren’t bombarded and overwhelmed by software features. The experience is similar to what you would get with a Nexus device, but Motorola has gone ahead and added in small details here and there to make the phone easier to use in select places, like the camera or lock screen. Motorola has really just tried to add-on useful features where it feels the experience of Android can be improved without getting away from Google’s intentions.

Compare that to Samsung or HTC, who have completely skinned Android, turning it into something that at times is almost unrecognizable. But they certainly pack in the features. In areas like the camera, Samsung has introduced so many special modes or filters, that I couldn’t even list them all out for you. HTC has done some interesting things as well, with Zoes and BlinkFeed. Again, these two have simply taken the opposite approach to what Motorola is trying to do.

In the video below, we take a quick look at both hardware and software of the Moto X, Galaxy S4, and One.