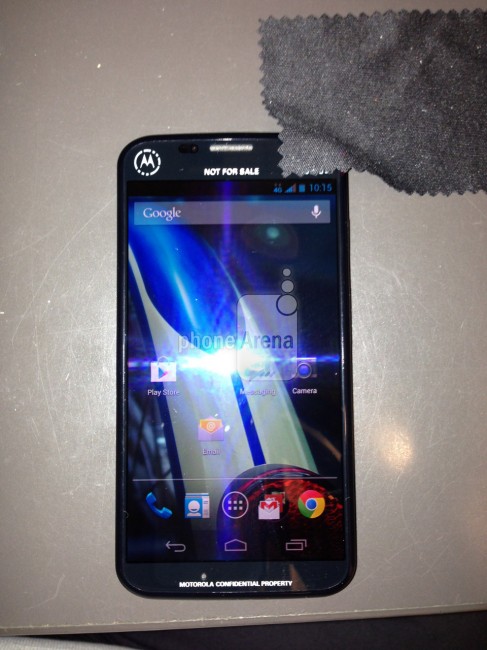 The Moto X is coming, we know that much thanks to a semi-announcement from Motorola CEO Dennis Woodside. What we’re confused about, is whether or not the XFON is the Moto X or if Moto X is a new brand or series of devices to be introduced by Motorola. For those not familiar, the XFON has been seen all over the place thus far as Moto’s first multi-carrier phone in some time, even appearing at the FCC with variants for AT&T, Verizon, U.S. Cellular, and Sprint. It’s thought to be nothing more than a mid-range phone with some neat tricks up its sleeves that Motorola has yet to fully reveal. But while we remain confused on the difference between the XFON and Moto X, one thing we do know is that Sprint’s variant is in testing and has been pictured (above) in the wild.

According to PhoneArena, a tipster sent in the picture above during LTE testing on Sprint’s network. They claim that the display size is roughly 4.5-inches, which matches up to rumors that it will fall anywhere between 4.3 and 4.7-inches in size. We’re looking at stock Android, with on-screen navigation buttons, 16GB of internal storage, and what may be a removable battery. As you are all well aware, companies outside of Samsung moved away from removable batteries long ago, so this would be a welcomed surprise. Even as phones continue to become more efficient, there is comfort in knowing you can quickly swap out a dead battery for a fresh one.

Other info that has surfaced over the last couple of months point to this phone running a 1.7Ghz dual-core Snapdragon S4 Pro processor, with 10MP rear camera, and 2GB of RAM.

There are no current rumored dates for a launch of the XFON, even if the media is trying to convince you that August 1 is in play.