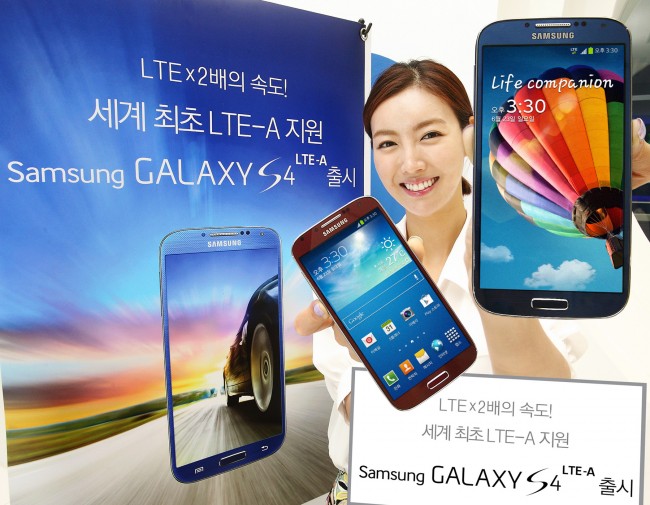 This evening, Samsung and SK Telecom, a Korean carrier that recently finished construction on the world’s first commercially available LTE-Advanced network, announced the Galaxy S4 LTE-A. The LTE-A is the world’s first device able to connect to an LTE Advanced network, as well as containing Qualcomm’s newest flagship processor, the Snapdragon 800.

Earlier today, a leaked hands-on and unboxing went up on the web of the new Galaxy device, complete with full retail packaging. In terms of what separates this and the regular S4 that everyone knows and loves, inside the LTE-A is upgraded GPUs, the 2.3GHz quad-core Snapdragon chipset and the LTE-Advanced radios. It still features the same 13MP camera, 2GB of RAM, Android 4.2.2 software, as well as all of that Samsung proprietary software.

The device will be available in both red and blue, hitting shelves sometime this summer in Korea. For now, Americans will have to remain patient to see something like this hit our shores.

“Samsung maintains a unique position for delivering LTE innovations as a provider of the parts, devices and equipment required to deliver next generation 4G LTE services,” said JK Shin, CEO and President of IT & Mobile Communications Division at Samsung Electronics. “The introduction of the GALAXY S4 LTE-A demonstrates Samsung’s desire and ability to provide consumers with technological innovations that take advantage of increased network speeds to deliver richer and fuller experiences.”

The GALAXY S4 LTE-A’s advanced network enables users to experience substantially faster speeds – double today’s LTE speeds – by leveraging carrier aggregation, an approach that combines different frequencies and uses them as one. With this groundbreaking technology, users can enjoy uninterrupted high-resolution streaming of their favorite shows and stronger, faster speeds when playing games, browsing the internet, and downloading files and applications.

Featuring a powerful 2.3GHz quad core processor and a long-lasting 2,600mAh battery, and capable of accessing significantly faster network speeds, the GALAXY S4 LTE-A delivers an enriched multimedia experience to users. New features such as ImageON＊ – which analyzes images that users view, then identifies and plays videos related to the image with just one click – extend access to relevant content on the internet and create new ways to experience and interact with multimedia resources. A high resolution Digital Media Broadcasting＊ service delivers unparalleled clarity and viewing experiences for on-the-go consumption of live television programs or sporting events. In addition, the GALAXY S4 LTE-A is equipped with the same innovative features of the GALAXY S4 that help make daily life richer, simpler and more fun.

＊ImageON and a high resolution DMB are only available for the Korean version.

＊ All functionality features, specifications and other product information provided in this document including, but not limited to, the benefits, design, pricing, components, performance, availability, and capabilities of the product are subject to change without notice or obligation.