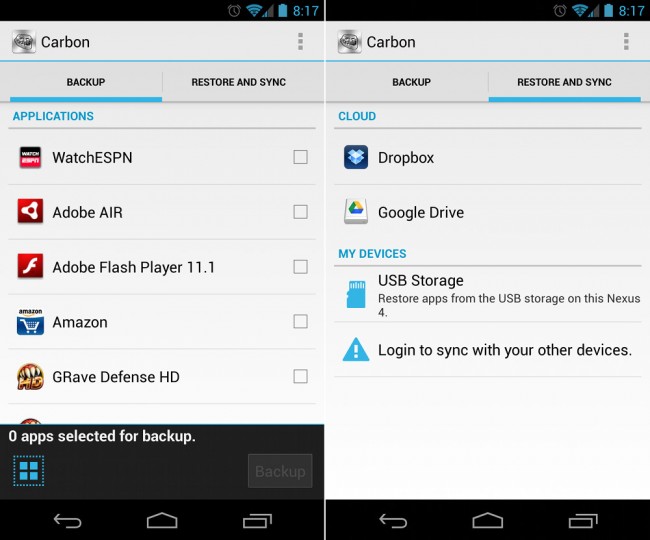 Just the other day we were talking about backup solutions and how you should always choose one that allows for cloud storage. Today, long-time developer Koush, released a beta of his new app that does exactly as we were describing, only it takes it a step further. He is tentatively calling this app “Carbon,” which we got a chuckle out of, after the name quickly brought back memories of the overhyped Twitter app by a similar title which never made an official debut.

Koush’s Carbon is a backup solution that allows you to backup your apps and app data to the cloud or to your SD card. It currently supports Google Drive, but he is working to build in Dropbox support as well. But beyond just the backing up portion of the app, the biggest highlight here is the fact that it can sync apps between devices. As you’ll see in his overview video at the source link, the app is running on two devices and acts almost in real-time when he looks from device-to-device to pull apps and data from one to the other. It’s pretty neat, to be honest.

And you can see how the sky can be the limit here. I don’t know if he has plans to, but user settings could potentially be included at some point, more backup services (like Box.net), and potentially even a media syncing feature of some sort. He has only mentioned the Box.net support coming, so the rest is just my mind running in all directions.

The current beta version has been posted at his Google+ page, which we have posted for you below. We should point out that this version requires root, but he’s expecting to remove that requirement once it goes final and official. Get to testing!