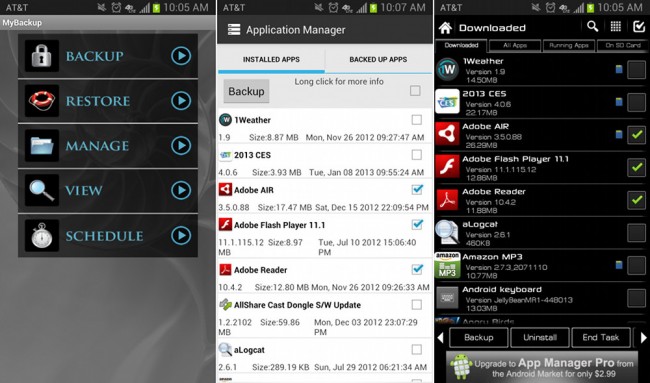 When you first buy a new smartphone or tablet, thinking about installing an app that backs up things like apps, photos, texts, and other information is recommended. Since many new users aren’t 100% familiar with the inner workings of a smartphone operating system and how it handles your phone’s data, 3rd party apps that automate processes like backing up are a great idea. In this mini-tutorial, we’ll tackle the benefits of backing up and some of the apps worth a look.

As a new user to Android, there may be times when you need to backup your apps, however, with the most recent versions of Android getting more advanced and a Google Play store that continues to evolve, it has become less and less important. For novice users, backing up can be good when you need to keep older versions of apps that are no longer available or because you think Google’s automated backup system from Google Play doesn’t work all that well. Thankfully, with apps being attached to your account for life, it’s not necessary to worry about always backing up apps unless you become an advanced user and root (gain system access) your phone. At that point, you can make full backups of apps that contain your user data and settings, something that can’t be done by normal non-root access.

Basically, what I’m saying is that for new users, app backups aren’t all that important. If you have to factory reset your phone or uninstall an app, you can simply load the Google Play store back up and re-install the app, if Google doesn’t do it automatically for you. The only problem here, is that you lose all of the data from the previously installed version. That’s when having root access can be beneficial, as you can backup user data and restore it. But you will rarely have to worry about not being able to install an app again.

I know this tutorial is about backing up apps, but again, it’s not something you really need to worry about unless you become a power user that is constantly factory resetting your phone.

Photos, Texts, and Other Info

On the flip side of backups, I would say that it is important to backup your photos, text messages, call logs, and other info. This information, if deleted during a factory reset or lost because you changed phones, might be missed. There are a number of apps that will store this info in the cloud so that it can be accessed from anywhere in the world, or on your phone’s microSD card for safe keeping.

Two of the most popular are apps called My Backup Pro and Ultimate Backup, both of which allow you to back up all of your personal data (photos, texts, etc.), store it on device or in the cloud (recommended), in a file that can be restored from any device. They are simple to use, can be automated to do it regularly, and only cost a couple of dollars. Free options like Dropbox are what I personally use for things like photos, however, they aren’t as automated and are more of a storage locker than anything. The best part, though, is the fact that Dropbox is easily accessed from PC browser to tablet to phone. There are also options for advanced users that are more of a file manager than anything, or if you decide to root your phone, you can have even more control.

Most of the apps I’ve laid out are super simple to use, and that’s on purpose. No one wants to have to worry about backups, so feel free to check out the couple of options we have included below and decide which you like the best. Most of them have free or trial options, giving you the time to find your favorite.

One thing that I definitely recommend, is using an option that can store your personal info in the cloud, so that if you lose your device, it’s stolen, or you change to something new, you can pull back your data with ease. Storing information on local drives has become a thing of the past, especially since many of us tend to carry around multiple devices that all need access to the same data.

There is no need to backup your contacts with an app or 3rd party service (like Verizon’s Backup Assistant). Google automatically backs up, updates, and restores your contacts, calendar, and Gmail once you login to your phone with your Google account. Using 3rd party apps only makes the situation a mess, often times creating doubles of contacts.