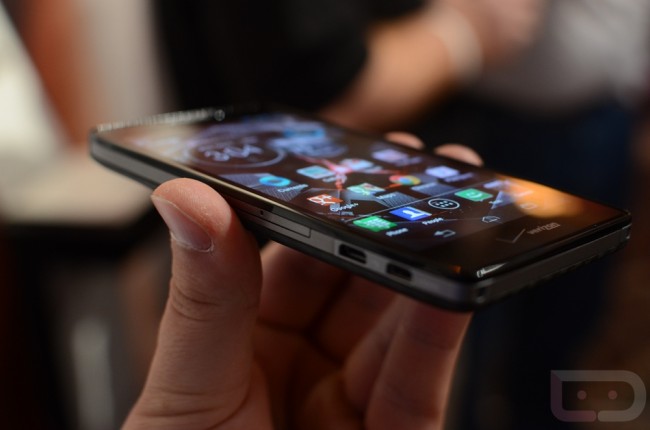 Today may have been all about new Kindle Fires, but for whatever reason, I’m still thinking about the event that went down yesterday, from Motorola. There were all sorts of interesting story lines to pay attention to. We had the first ever product announcement by new CEO Dennis Woodside, some of us hoping for a surprise or two, and then a mention that this was a “new Motorola” that would return to caring about customers. It was a lot to process, but I came away with some opinions and wanted to share.

Even if Dennis Woodside had not been on stage talking about a “new” Motorola, we all could have guessed that this was indeed a new beginning for a company desperately in need of one. Motorola is now Google-owned and has a former Google exec running the show, along with a number of hand-picked big wigs. There is no way, that going forward, there won’t be a Google influence on this company even if Google will continue to try to tell you that there won’t be. After all, Eric Schmidt opened the damn thing, talked about Google for 5 minutes, and then brought Woodside on stage. Following his intro, Woodside then mentioned Google more times that I could even keep track of.

But being “new” is something I think that we all can appreciate. Former CEO Sanjay Jha seemed to care about two or three things that no one else on the planet cared about:  locking down phones, enterprise garbage, creating a Blur database, and attempting to re-invent the wheel. It’s clear that with Woodside in control, it’s about getting devices in as many hands as possible and actually listening to customers. In order to do that, Motorola is creating devices that appeal to everyone, built with quality materials, at affordable prices, that are hackable (if you want them to be), and last a long time on a single charge.

We were introduced to the RAZR M, RAZR HD, and RAZR MAXX HD yesterday, three phones we essentially already knew everything about. Well, we didn’t know for sure that a MAXX HD was on the way, but when it was announced, it didn’t exactly surprise anyone. All three phones look fairly impressive. They all sport the latest in high-end specs, are built with high-quality materials, and will likely hold a signal better than any other phone on Verizon’s network.

But did any of it blow our minds? If we look at the competition, it’s tough to jump up and say, “Hell yes it did!” The Galaxy S3 has all of the specs in the RAZR HD, but with double the RAM and it has been out for a couple of months now. The RAZR HD, well, it won’t be out until this winter when a new Nexus or two will arrive, along with HTC’s 1080p phone, and who knows what else.

The RAZR M is an interesting product, though. It’s affordable, has great specs, and an edge-to-edge display that helps it fit into a smaller package. If only Motorola could have taken the edge-to-edge approach to the RAZR HD, then maybe we’d be talking about something truly innovative.

So while I haven’t had my hands on any of these phones yet, after watching the press event, I’m simply left shrugging my shoulders at them. Style-wise they look OK, if you like the look of the original RAZR. I know that I can’t ever go back to qHD, so the RAZR M isn’t for me. The RAZR HD could be an option, but it won’t be out for a couple of months and by then, we’ll have so many amazing options that I’m trying to figure out if it will even be in the equation?

One of the highlights to the event was the announcement that Motorola is going to care about the “tinkerers and hackers” in the Android game. They will release developer edition phones with unlockable bootloaders, since the whole hacking scene is part of the draw for many to Android. The only problem is, you can’t buy one of these at a subsidized price and will instead have to fork out anywhere from $550 to $650 for one. I appreciate there being options like this, but not everyone has $700 lying around or is willing to save up that kind of cash to spend on their next phone. Plus, at that kind of price, I can’t imagine there will be enough in the wild to create much of a developer scene. The majority of RAZR HD owners will likely buy the phone on contract at $199 and then hope that someone can root it and eventually figure out how to get recovery on there for custom ROM flashing.

Nothing will change from the scene today, but this way, Motorola and Verizon can say, “We gave you an option.” Just seems half-assed at this point. If they really want to support developers, then they should release a bootloader unlock tool for all of their phones and then make it clear that if you unlock, you void your warranty. Keep track of MEIDs that are unlocked and refuse to support warranty claims that were willing to roll the dice. That’s giving people a choice.

At the end of the day, I’m still excited to give these new RAZRs a spin. Official opinions can’t ever be formed after watching a live press event over YouTube. But beyond the products, I think what I’m more excited to see, is what Dennis Woodside and his crew can do with this company that we have all wanted to love for the last two years, but were unable to after watching them make horrible decision after horrible decision. Moto should have a bright future, we just need to get out of 2012 to see it.