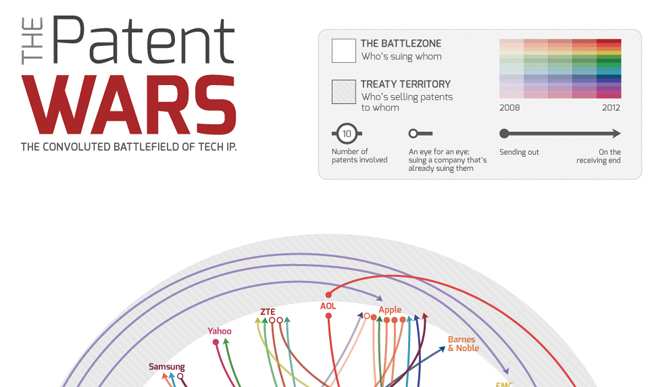 This whole battle of tech intellectual property is getting, or has gotten, out of hand. It seems that every company that you know the name of is suing or is being sued for something that they have done. Most notably for readers of this site though, is the attack on Android from all sides. Visual.ly has massed together some of the numbers and has put their infographic spin on it, and the whole thing looks just as confusing as you would expect.

Laying it all out helps, but not much. Each company has different suits spiraling outwards in different directions and with different number of cases. The graph even accounts for how many patents are involved and which companies are suing each other. One side of the circle with some of the most traffic is Apple’s corner whose lines can be traced to Samsung, HTC and Motorola. Don’t forget, Microsoft is right in the thick of it as well.

The most recent effect we have seen of this patent battle was the stalling of HTC devices arriving from coming through customs due to an ITC investigation thanks to Apple. With Samsung and Apple agreeing to talk things over, if we see some agreement between them could we see a disarmament of patent wars?