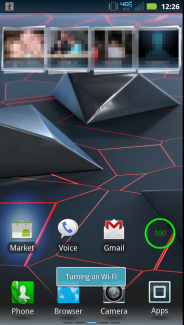 Within the first couple of minutes with both the DROID RAZR and HTC Rezound, I noticed something that I had never seen before on an Android smartphone. Every time I opened up certain apps, like say the Android Market or Google Voice, I was being told that WiFi was automatically turning on and that I should use it. It was actually sort of frustrating, especially since both phones run on Verizon’s 4G LTE network, which is faster that most home cable connections. To tell you the truth, I tend to leave my phones’ WiFi off when at home for the most part for that simple reason. Speed rules, baby.

So why were both phones continually asking that I use WiFi whenever I opened up an app? Because they require data connections – it’s as simple as that. In an era of tiered data plans and ultra-fast download speeds, features like the one you will see on both of these new Verizon phones are going to become the standard. We may have the ability to gobble up data in seconds, but that doesn’t mean the carriers or our tiered data plans are OK with that.

Now that unlimited data plans for new customers or new lines are long gone, features like auto-WiFi notifying will more than likely come in handy. Automation at its finest. For those of us locked into unlimited data (for now anyway), you can turn these off with a couple of taps. Head into Settings>Wireless & networks>Wi-Fi settings> and uncheck the box for “Notify me.”