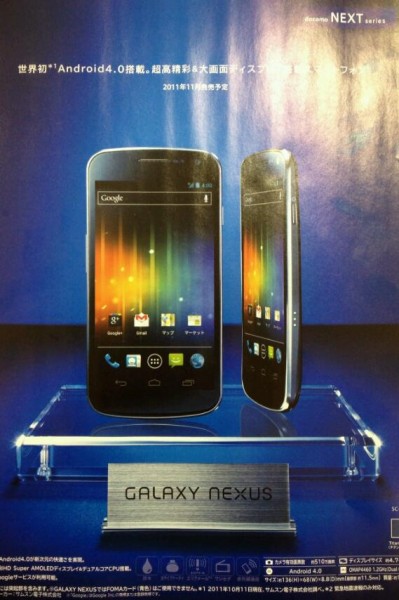 The internets were already buzzing this morning after Japan’s Docomo semi-announced that it would be carrying the world’s next Nexus device in November and then this image just showed up. I’ll admit that I have no idea where it came from, but it looks like a catalog or magazine photo from Docomo for the Samsung Galaxy Nexus. It definitely doesn’t look like any of the fake renders that have been released over the last few weeks, so at this point we are willing to roll with it.

Couple of things we immediately notice are the words “Android 4.0” for Ice Cream Sandwich. And then once your eyes cruise towards the bottom, you will see in fine print a couple of the rumored specs that could now be considered “confirmed.” What do we have? 1.2GHz dual-core OMAP 4460 and a Super AMOLED HD screen.

And today got started a lot earlier than we had anticipated…