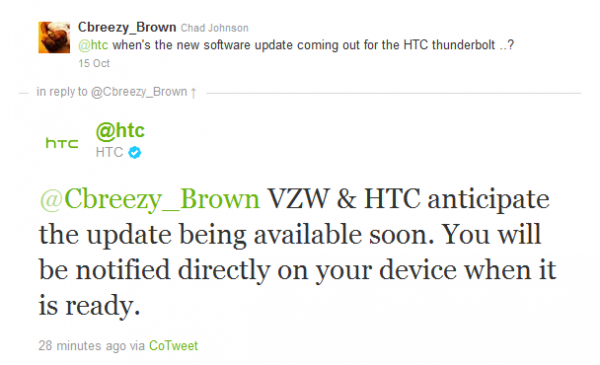 Been wondering what happened to the Gingerbread update for the HTC Thunderbolt? Well, after early adopters noticed that their device could no longer receive voicemail notifications once they had updated, it was pulled with no future date in sight. And then, just a week or so later, a security vulnerability was pointed out to HTC which we are assuming is what’s causing the additional delay. A voicemail bug can’t be that hard to fix, right? Who knows about a security issue like that though.

So what is the latest? According to HTC’s official Twitter account, it will be here “soon.” Damn do we love that word! With no time table given at this point, we are about out of ideas as to when you may see it. The original Incredible still doesn’t have it by the way, so you aren’t alone Tbolt owners. What a mess.