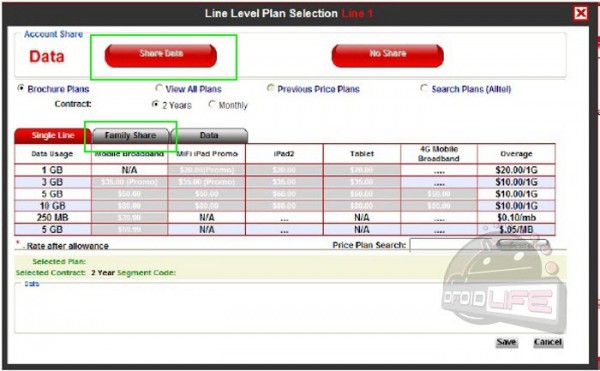 We’re not exactly sure what Verizon has planned for June 26, but we’ve been told that it has to do with new plans that could eventually lead to shared family data packages.  We first heard about family data buckets back in May, so this wouldn’t be completely surprising, although it seems a little sooner than we had originally thought.  The idea here is that family plans already allow additional lines to pull from a main line’s bucket of minutes, and doing the same with data only makes sense.  As you can see from the screenshot above, this new data screen shows the option to “Share Data”, but also shows a “Family Share” tab which is where we are drawing these conclusions from.

We should note that there have been no indications that tiered plans are imminent and likely won’t be involved on the 26th, but it sure would be a lot easier for Verizon to sell them if they also offer new family data packages.  And June 26 could come and go and we might not hear a word on any of this, since it almost appears to be just backend stuff.  What you will want to look out for though, is the time after the 26th which could involve announcements on the future of Big Red plan structuring.

Update:  We’re hearing that you may not see any major changes including family shared data until after the 4G LTE hotspot promo ends on July 7th.

And hopefully that wasn’t too confusing, but we wanted to make sure to keep you all in the loop on this stuff.  We know that tiers and data are always a hot topic.

*Note – IGNORE the numbers in that screenshot.  The only thing we are trying to point out is the stuff we’ve highlighted in green boxes.