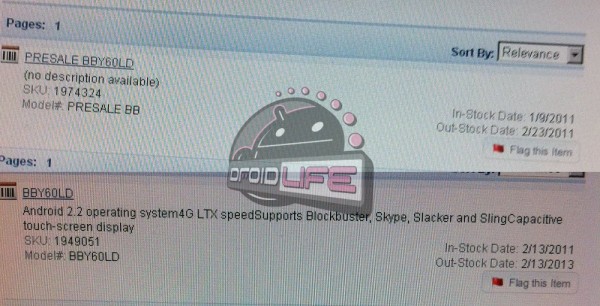 Best Buy is doing whatever they can to throw us off of the release date trail for the HTC Thunderbolt, and even I’ll admit that they have done a pretty good job so far.  Rumors and screenshots from our friends on the inside have been bouncing all over the place, but in the end we always seem to come back to a couple of specific dates:  February 14 and 24.  We’ve stood by word that the 24th will indeed be the day that the phone hits store shelves and if we look at this latest shot showing that the pre-sale for it ends on 2/23/2011, we’re sticking with that idea.

To give you a little background on the shots above, BBY60LD is the internal code name for the Thunderbolt and SKU 1974324 matches the pre-sale number we saw in the new BBY ad from this morning.  So when we see 2/23 and that SKU, we can only assume 2/24 should be the day, right?

Here is our proposed timeline of events for the TBolt:

And of course, I could be 100% wrong and would gladly accept the TBolt to land in my hands on February 14 which is 10 days sooner than we’re expecting.