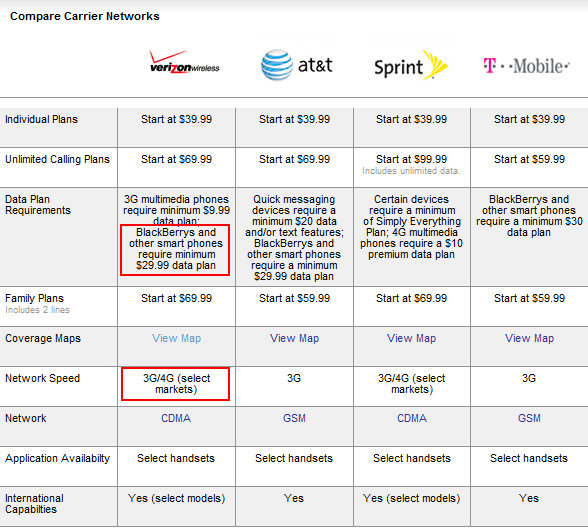 Two of our sources mentioned to us yesterday that there was a strong possibility of Verizon launching their first 4G LTE device, the HTC Thunderbolt, with a $29.99 unlimited data plan.  It almost seems hard to believe, but with only a few cities ready to take advantage of VZW’s new network, it could easily be an introductory rate that would change as rollout to additional markets begins or so Verizon can see how much data their first set of 4G customers are consuming.  No matter what, we’d be more than happy to pay the same price for 4G data as we are currently for 3G.

And to help aid the idea that we could be paying just $29.99 to start, one of our readers was cruising through Best Buy’s mobile phone plan page and noticed that same price and the fact that they are now listing it with both 3G and 4G under Verizon for network speeds.  Obviously we could be jumping at nothing here, but they only mention that their smartphones will require a $29.99 data plan while Sprint on the other hand, makes it clear that 4G speeds come  at a premium.

We’re hoping to know more by next week with a possible Thunderbolt announcement.

Update:  And just after I hit publish, we received confirmation from a 3rd source that we will indeed see $29.99 prices for 4G plans initially.  Fingers crossed, people.