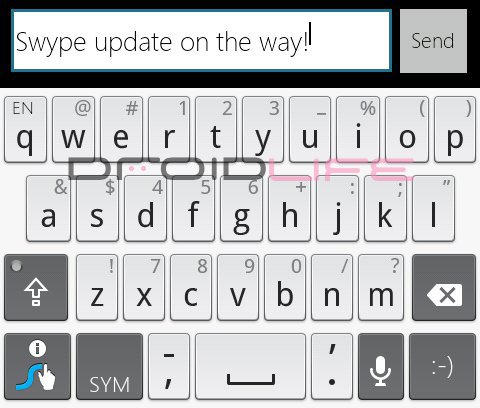 For those of you in the exclusive Swype Beta program, get ready for an update!  A source at Swype Inc who has asked to remain anonymous just told Droid Life that a new version of the Swype Beta for Android is going through the last stages of internal QA testing now. If you have an account that’s been accepted to the beta, expect an update to hit your email inbox sometime during the first week of November.  The update should resolve the vast majority of – if not all of – the problems with installation, and fix some accuracy issues introduced in the last update. Supposedly there’s more stuff than that in the update, but we couldn’t get a confirmed list.

Update:  That is a screenshot from K’s DX, there are no plans that we know of that include a microphone button in this release.