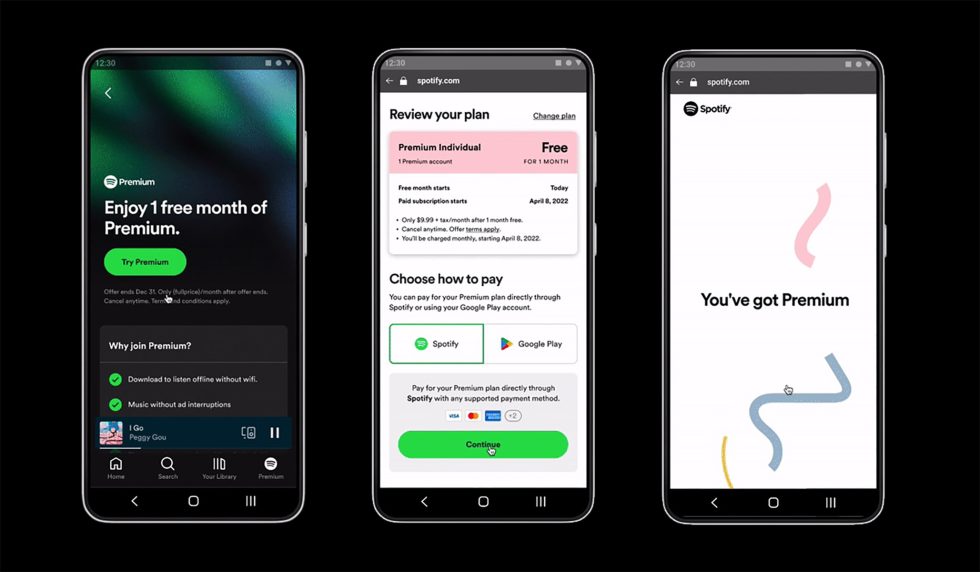 Back in March of this year, Spotify and Google announced a first-of-its-kind billing system called User Choice Billing (UCB) that would allow customers of Spotify to choose how they pay for Premium. This was a big change from the norm, as it showed Google opening up and allowing there to be a billing system within Android apps that runs alongside Google Play.

The idea is pretty simple – some people might want to use Spotify’s payment system instead of Google Play’s. This idea is now rolling out to Spotify, as well as Bumble, who Google identified today as another test partner for UCB.

With UCB added to an app and you go to pay for something or subscribe, you’ll now get choices of payment systems. As you can see in the images above for Spotify, there are two options (Spotify or Google Play) to pay for Premium. If you choose Google Play, you’ll walk through a familiar Play payment experience. However, if you choose the Spotify option, you’ll be subscribing through Spotify with a credit card form and all.

Overall, I think this is a pretty great pilot program from Google. I certainly have services that I’ve paid for outside of Google Play, so forcing me to use Google Play for everything could be a mess at times. Also, if you were to switch phone platforms, dealing with a subscription through Google Play or Apple’s App Store might have created problems or extra work to move that between systems.

Again, this is a pilot program that Google is using to test the multi-billing option waters on. Should Spotify and Bumble see success, you could see this in a new wave of apps near you.